Image magician Daniel Macháček has been turning his energies to Viking Orbiter views of Mars lately, with some stunning results, like the one below. I'm not sure how he makes images that look so sharp and clean and with such rich color out of the Viking Orbiter data.

Taken on October 14, 1979, a strip of Viking Orbiter 1 images covers Mars from Ascraeus Mons, near the equator, across the pits and fissures of Noctis Labyrinthus and Claritas Fossae, down to the cloudy southern pole. The original data consisted of red- and violet-filter images; a green channel was synthesized from these to fill out the color.

If you're curious to see the data that he started with, well, I was too, so here it is. You can actually see a surprising (surprising to me anyway) amount of albedo variation between the violet- and red-filter images, so the subtlety of the color that Daniel managed to achieve is no longer surprising -- but it's still a fantastic job cleaning up the data. It just goes to show how many beautiful views of Mars are just waiting to be released from the Viking Orbiter archives. 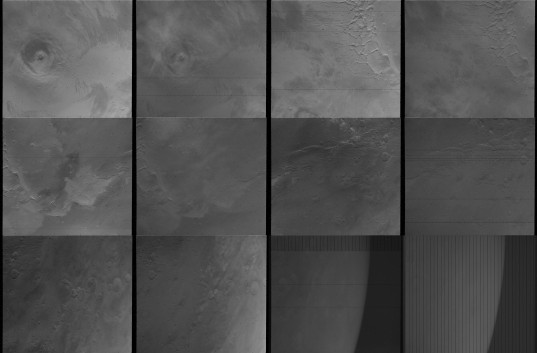 These 12 frames were captured by Viking 1 on October 14, 1979, in alternating violet and red filters. They were downloaded from JPL here and run through IMG2PNG.