Data from two of the cameras aboard Chandrayaan-1 are now available through the ISRO Science Data Archive (ISDA), a new(?) site that is being established to host the data from ISRO's deep-space missions. Chandrayaan-1 was India's first mission beyond Earth, which orbited the Moon for about 10 months from November 8, 2008, to August 27, 2009. It successfully returned quite a bit of data from its 11 instruments, including more than 70,000 images, but it failed to complete its nominal two-year mission. Thermal control (keeping the spacecraft from overheating when orbiting over the hot sunlit face of the Moon) was a major challenge for the mission.

Data from the NASA-built Moon Mineralogy Mapper instrument was released through NASA's Planetary Data System in August of last year, but other data sets have not made it into the public domain until now. Through the ISDA you can now get to data from the Terrain Mapping Camera (TMC) and Hyperspectral Imager (HySI). Fans of lunar exploration should be very interested in the Terrain Mapping Camera images, because they're in stereo (or, at least, they can be)! But before you get too excited, I need to tell you that the actual full-resolution data has not been released yet; this new website currently only gets you to browse-resolution versions of the images. The site says that full-resolution images will be available "soon" but doesn't give any information as to when "soon" might be.

So what is on the website? To get to any of the data, for some reason, you have to fill out a lengthy registration form for which all fields are required including your name, gender, address, phone, fax number, "pincode," and a security question. It's easy enough just to put garbage in these required fields; but why on Earth are they asking for all this information in the first place, I wonder? Once you've logged in, you can choose either to browse the data through map interfaces (including equatorial and polar views, though there's no cues provided to the latitude and longitude covered by any of these maps), or through a search tool that permits searches by date or latitude/longitude, which returns listings of images (there's usually at most one) whose upper left and lower right corners bound that latitude/longitude pair. (One disappointment: you can't get to the images taken during the time Chandrayaan-1 was cruising to the Moon, which include global views of Earth and the Moon.) 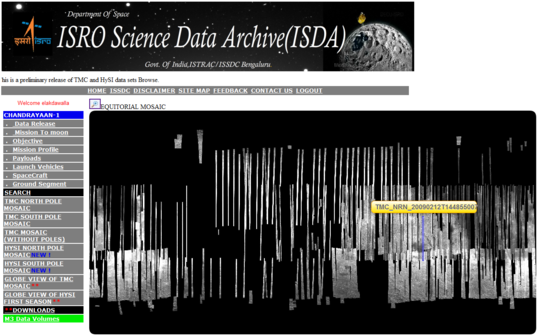 Just for grins, I plugged in the latitude and longitude of the chain of craters that I explored last year using Lunar Reconnaissance Orbiter Camera (LROC) photos, and was rewarded with a single search result that did, in fact, partially cover this crater chain. The image was flipped vertically (not rotated, but mirror-flipped), which I've corrected in the version below, left. By comparison with the LROC image below, right, it seems that this TMC browse image has a resolution of 40 meters per pixel; according to the metadata for the TMC image, at full resolution it will be 5 meters per pixel.

Chandrayaan-1 took this photo of a chain of lunar craters on April 18, 2009 with its Terrain Mapping Camera. This browse image has a resolution of 40 meters per pixel, about an eighth of the data's full resolution. It is highly JPEG compressed, resulting in a noisy and blocky appearance at full resolution.

It's interesting to compare these two views of holes in the ground. The TMC image was taken with significantly higher sun than the LROC image; LROC sees the Moon at a wide variety of solar phase angles. Because of the higher sun angle, you can see more deeply into the holes using the TMC image. LROC has operated for far longer than TMC, though, and is imaging many areas multiple times at different sun angles.

TMC had one capability that LROC doesn't. Like the High Resolution Stereo Camera on Mars Express, TMC captured simultaneous stereo information. TMC had three sets of optics pointing fore, aft, and nadir along the spacecraft ground track (HRSC, a color camera, has nine look directions, as I explained in this post). That means you can make a 3D view of the Moon for any spot that Chandrayaan-1 imaged, with very little effort. Here, for instance, is the same lunar crater chain in 3D, a view I composited from nadir and forward-looking images. The two had different pixel aspect ratios, which I adjusted for before overlaying them to make this anaglyph. You also have to rotate the images a quarter turn clockwise or anticlockwise so that the offset of the cameras is side-to-side rather than up-down or else the 3D effect doesn't work for human vision. Use red-blue glasses for the 3D effect. It's pretty neat to get 3D so easily!

This chain of lunar craters on the Moon was photographed by Chandrayaan-1's Terrain Mapping Camera (TMC) on April 18, 2009. TMC has simultaneous stereo capability, with three cameras pointing fore, aft, and nadir along the spacecraft's ground track. Any area imaged by TMC can be seen in 3D by overlaying two of these three images.

The moral of this story: I think the Chandrayaan-1 Terrain Mapping Camera data set will be useful and interesting to armchair lunar explorers in particular for its stereo coverage. It'll be much more interesting once the full-resolution data are made available. The web interface to the data is very bare-bones and it's strange that it requests all sorts of personal information, but I was able to quickly locate an image covering an area of interest, which is more than I can say for my experience with JAXA's Kaguya data archive.

Thanks to Pradeep Mohandas for the tip on the availability of these data!