Asteroid (216) Kleopatra has been interesting to astronomers for a long time because its brightness is highly variable, but it seems to get more interesting every time somebody looks at it with a new instrument. In 2000 it was found to be "dog-bone" shaped; in 2008 it was discovered to have two moons. This week a paper was published in Icarus by Pascal Descamps, Franck Marchis, and 17 coauthors, who used measurements of the orbits of those moons to determine Kleopatra's mass and density, which revealed that it's 30 to 50% empty space.

Just in time for the paper to appear in print, the IAU has approved names for the two moons: Cleoselene and Alexhelios. As the UC Berkeley press release states, these names were chosen for the twin children of Cleopatra: "The Committee on Small Body Nomenclature of the International Astronomical Union accepted the proposal of Marchis and his collaborators to name the moons after Cleopatra's twins by Mark Antony: Cleopatra Selene II and Alexander Helios. The outermost moon is named Alexhelios and the innermost moon is Cleoselene. In Greek mythology, Helios and Selene represented the sun and moon, respectively." The new names were announced here (on page 371 of the linked PDF).

Here's a summary of the past research into Kleopatra:

Here's one of the images from Keck II showing the newly discovered moons, which also actually resolves the asteroid as a dog-bone shape: 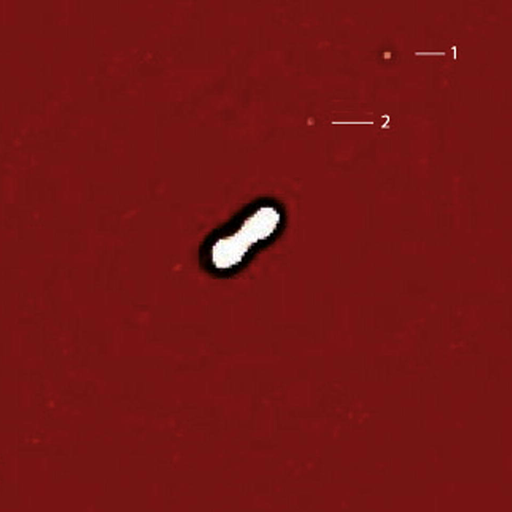 An image from the adaptive optics-equipped Keck II Telescope resolves the dog-bone shape of asteroid (216) Kleopatra and its two moons, outer Alexhelios (1) and inner Cleoselene (2). Kleopatra is about 271 kilometers long, with two lobes each 80 kilometers long joined by a neck about 50 to 65 kilometers wide. The two moons are between 5 and 10 kilometers in diameter and orbit 454 and 678 kilometers away from Kleopatra.

And here's a spiffy animation of inner Cleoselene and outer Alexhelios in motion around the spinning Kleopatra:

A model for the shape of asteroid (216) Kleopatra spins while its two moons, inner Cleoselene and outer Alexhelios, orbit it.

This discovery made (216) Kleopatra the fourth discovered triple asteroid in the Main Belt, after (87) Sylvia, (45) Eugenia, and (3749) Balam. With three nights of observations -- on September 19 and October 5 and 9, 2008 -- the astronomers were able to determine the size, shape, mass, and density of the primary body and the size and orbital parameters of the moons.

Knowing the sizes and orbits of the moons, they looked back at some data from a 1980 occultation of a bright star by Kleopatra, and it now appears that one pair of observers might actually have seen Alexhelios occult the star!

They described Kleopatra's shape this way:

Kleopatra is confirmed to be irregularly shaped and strongly bifurcated. Its spatial extent is about 271 x 65 km. It appears to look more like a dumbbell than a dog-bone. Two equal-sized misshapen lobes, each 80 km across, are joined by a thin and long bridge of matter about 50 to 65 km across and 90 km long. From a quick comparison between AO images and projected radar model, it appears that Kleopatra seems much narrower than its radar model and therefore is likely a more stretched body than believed. Despite these slight disagreements the radar shape model is a good reference to estimate the size of Kleopatra.

From the size and the mass determined from Alexhelios and Cleoselene's orbits using Kepler's second law, they were able to determine a bulk density for Kleopatra of 3.6 ± 0.4 grams per cubic centimeter.

Now, this is an interesting number. It's denser than the densest of common rock-forming minerals, the densest of which comes in at about 3.5 g/cm3. However, it's far less dense than the next denser common compositions for asteroidal bodies, which are silica-bearing iron meteorites at 5.0 or iron meteorites at 7.5. Multiple lines of evidence -- its M-type spectrum, its very high radar albedo, its extreme radar smoothness, and extremely high thermal inertia -- all suggest that it is metallic. If it is, in fact, metallic, it must consist of almost 50% empty space in order to have a bulk density of only 3.6; it's a loosely agglomerated rubble pile.

From all of this information, Descamps and his coauthors write, "We can now draw a convincing picture of Kleopatra's story, born from the aftermath of a reaccumulation process following the violent disruption of a parent body and sped up fast enough to deform according to the rough guidelines given by the equilibrium sequences of a spinning liquid mass.... This does not mean that the interiors are liquid but only that the loosely packed internal structure may interact and react in a similar manner as a liquid mass does over a long period of time. As to the origin of Kleopatra's companions, they could be a byproduct of the spinning-up process leading to mass shedding in orbit." In other words, Cleoselene and Alexhelios likely were born from Kleopatra as the asteroid spun faster and faster.