Conjunction season is over, and Opportunity is back to work

The flow of data from Mars has resumed. Mars passed through solar conjunction on February 4, meaning that all of the active spacecraft spent at least a couple of weeks in a period of very low activity. It's not that Mars being in conjunction inherently represents any risk to the spacecraft; it's just that if a spacecraft managed to get in trouble while doing routine operations, we wouldn't have been able to help it by sending up any commands. For the Mars Exploration Rover Opportunity, poised at the edge of Santa Maria crater, there was a command moratorium in place from January 27 to February 11.

It's always a relief when conjunction passes. Opportunity has gotten right back to work, sending down data acquired just before the moratorium began, including the images that Jan van Driel used to create this panoramic view of Opportunity's somewhat dusty deck: 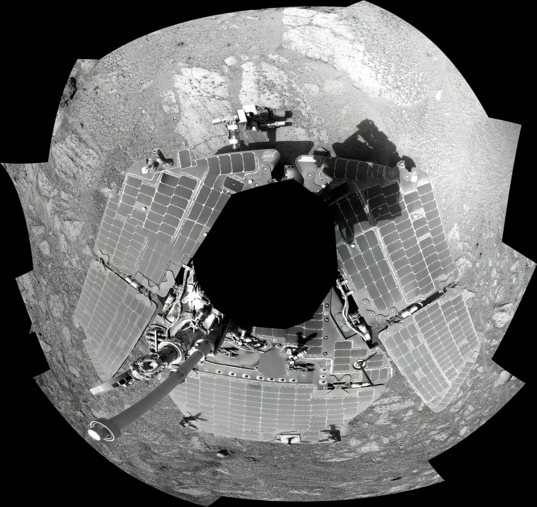 Opportunity captured the images for this self-portrait on sol 2492 (January 27, 2011), just before Mars entered solar conjunction.

According to rover driver Scott Maxwell's Twitter feed, they actually didn't get back to driving Opportunity again until February 16 (yesterday). Having spent the break waiting for a Mössbauer spectrometer integration on a rock near the rim of the crater, Scott said, the plan over the next couple of days is to carry on with the in situ investigations, using the RAT to drill into the rock. But I can't imagine they will take too much more time with investigations at Santa Maria; it's time to drive, drive, drive for Endeavour.

As for Spirit, they still haven't given up; as far as I understand it, the plan was to resume attempting contact with the missing rover today. I wish them luck!