I've spent a day with the Stardust images from Tempel 1, and had a chat with co-investigator Jessica Sunshine, so here are a bunch of images with some preliminary scientific commentary. Jessica was just ecstatic about the success of the flyby. I commented to her that I didn't expect the images to be so good, and she said "nobody did." The "backside" images are spectacular, while the "frontside" images are going to help them a lot in refining what they learned from Deep Impact. She said that because of the geometry of this flyby they have a lot more stereo information than they had from Deep Impact, and there's already a lot of surprises, "some very interesting things that we'd never have noticed." Shapes that they thought were hills turn out to be depressions! "It's very humbling," she said. "It's a very complicated body."

So here goes with some specific images and commentary. First of all, guess what? Tempel 1 is a comet! See, it has jets: 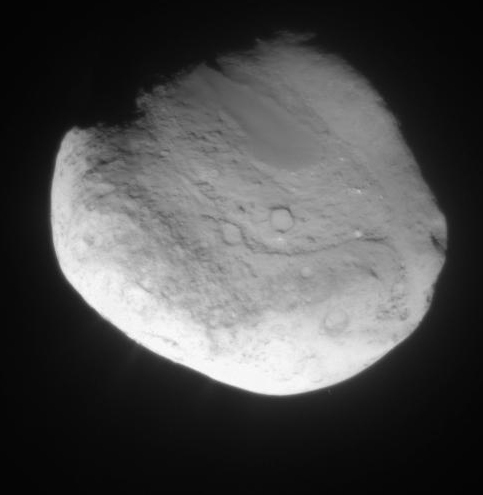 Stardust took this photo of Tempel 1 15 seconds before its close approach to the comet on February 15, 2011.

If you can't see the jets in that photo, try this mightily enhanced version. I can convince myself that I can see at least four jets; Jessica told me she's seen five. 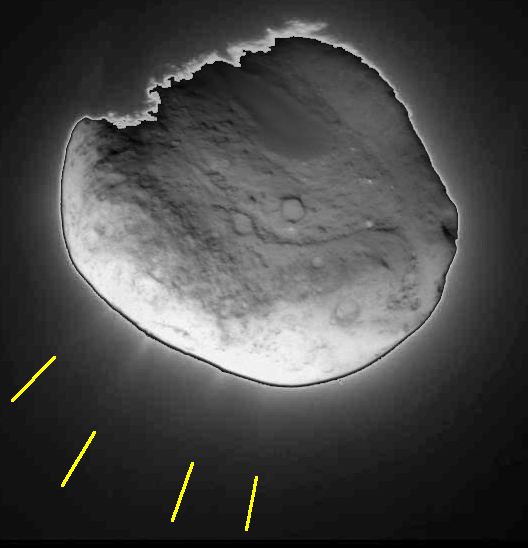 In an image taken just 15 seconds before its closest approach to the comet, Stardust's cameras reveal at least four jets rising from the surface. (This image has been heavily processed to reveal the jets.)

Second item: they've now posted 61 out of the 72 science images of Tempel 1. A few frames have not yet been posted, largely the ones with quality issues. But 61 is plenty for a cool animation. Here's a much more polished version of the animation that I posted yesterday.

This animation consists of 61 images of Tempel 1 taken by Stardust during its flyby on February 15, 2011. The images have been rotated 180 degrees (so that illumination appears to be coming from above) and aligned.

It's hard to track the surface features on Tempel 1 near closest approach because of the rolling of the spacecraft as it passed, so in this animation I tried to compensate for Stardust's changing distance and orientation to the comet by resizing and rotating frames. I'm not sure how successful it is but it was an enjoyable exercise.

Here, the 10 images taken by Stardust nearest its closest approach to Tempel 1 have been resized and rotated to match each other, taking out some of the distracting effects of spacecraft motion, making it easier to follow morphological features as Stardust passes by the comet.

Next, here's a before-and-after view of the Deep Impact crash site. The crater is very, very subdued, but it is unmistakably there. 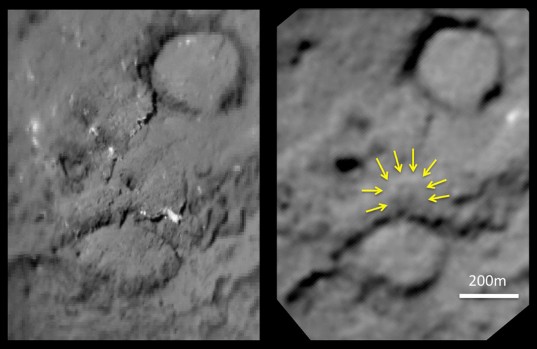 The Deep Impact crater on Tempel 1

This pair of images shows the before-and-after comparison of the part of comet Tempel 1 that was hit by the Deep Impact impactor. The left-hand image is a composite made from images obtained by Deep Impact in July 2005. The right-hand image, from Stardust, shows arrows identifying the rim of the crater caused by the impactor. The crater is estimated to be 150 meters in diameter. This image also shows a brighter mound in the center of the crater likely created when material from the impact fell back into the crater.

The folks at unmannedspaceflight.com have been messing around with the publicly released images, trying to see if they can make the crater appear more obvious. This first effort is from Ian Regan, who stacked several Stardust images to try to bring out more definition in the shape of the crater. In this view it seems to have an irregular, polygonal outline: 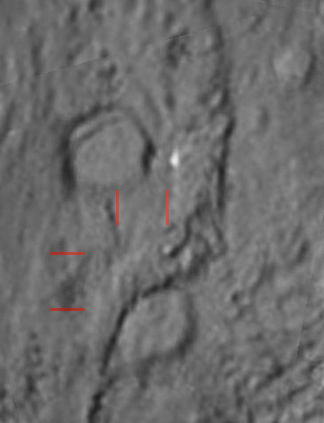 Stacked view of the Deep Impact crater on Tempel 1

Several of Stardust's images of the Deep Impact crash site on Tempel 1 have been stacked to produce this view of the crater and central mound on the comet.

Here's another attempt to explore surface changes by morphing one image to another. This approach is hazardous because of the different viewing angle and lighting angle between Deep Impact and Stardust -- these two conspire to make the lower of the two circular features appear to wobble back and forth between the two images, when we're really just seeing it from two slightly different perspectives. But I think this animation makes it easier to see the surface changes due to the Deep Impact crater. As well as some along the smooth flow-like feature.

In this animation, two views of Tempel 1, from Deep Impact in 2005 and Stardust in 2011, have been warped to match their geometry and then morphed back and forth. Some of the apparent motion between the two images is due to the different viewing geometry, but there are a few visible changes to the surface between the pair of images, particularly along the edge of the smooth flow-like feature at the bottom of the image and at the site of the Deep Impact crash between the two dark-rimmed circular features.

Speaking of surface changes along the flow-like feature, Jessica was really impressed with those. "Our wildest hope was that the flow would move -- and it really did!" She said that they'll work with shape models to try to figure out what changed over the last six years. She said, "We'll probably find out that a lot of the planet didn't change very much, and some of it changed quite radically." 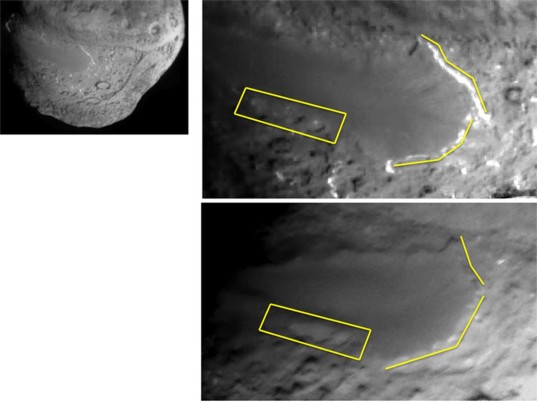 So there you go. Enjoy touring Tempel 1. I'll post more images and interpretation as I hear it! I'll close by posting Daniel Macháček's great crossed-eye stereo view of the comet so that I have all the best images in one post. 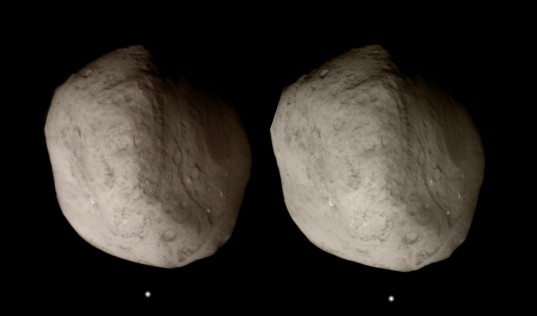 To see comet Tempel 1 in 3D, enlarge the image, look at it, and relax; slowly cross your eyes, trying to get the two pictures of the comet to overlap. Once they overlap in the center of your vision, bring your eyes into focus on the overlapped view, and it should appear three-dimensional. The image has been artificially colorized based on color images from the Deep Impact mission.