Thanks to the work of several amateurs, Google Mars is a great tool for following the past and future peregrinations of the Mars Exploration Rover Opportunity. I've written about this before; today's update concerns some new image layers that the Planetary Society is hosting that will allow rover fans to follow Opportunity's journey from her present position all the way to the rim of Endeavour crater, which is about 6 kilometers away. That's no small distance but since Opportunity has covered more than that in the past year, and the Martian summer is now approaching, I think we can reasonably hope to be at the base of Endeavour's rim by the end of this year.

If you would like to explore Opportunity's landing site using Google Mars, here's how:

Here's a screen shot showing what the map looks like today, with Opportunity wrapping up her work at Santa Maria crater. Once Mars has exited solar conjunction, she'll be hitting the road again toward Endeavour's rim. The blue line shows the direction Opportunity will likely travel over the coming months. She won't make quite that straight a beeline for Endeavour, but she probably won't veer far from it, as the terrain is just getting easier and easier to traverse and the mission has much more to gain from reaching those hills than it does from stopping and smelling the roses along the way. The new image data are the little postage stamp covering Santa Maria (and Opportunity's current position), and the irregularly-shaped section covering the blue line of the future path. 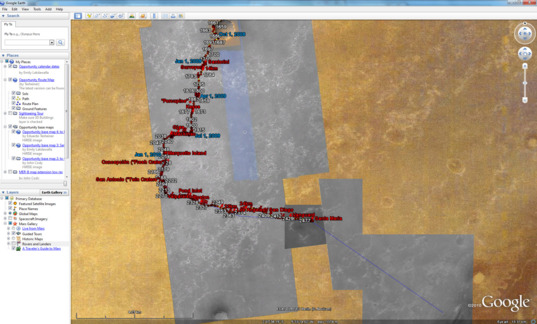 Google Mars view of Opportunity traverse as of February 9, 2011 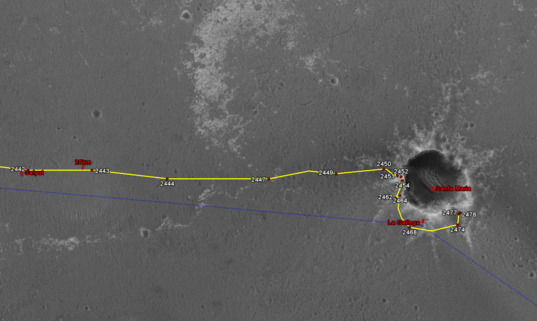 Google Mars view of Opportunity traverse as of February 9, 2011 (detail)

The image layers were formatted and georegistered by John Cody, Eduardo Tesheiner, and me, and are being hosted by the Planetary Society.