I've written here before about the huge storm that's spreading across so much of Saturn that it's been readily visible even from Earth-based telescopes. Over the past couple of days a couple of new images of Saturn have appeared that show just how enormous the storm is today. Here's one from the Cassini orbiter, which is, of course, in a better position than anybody else to view things happening on Saturn: 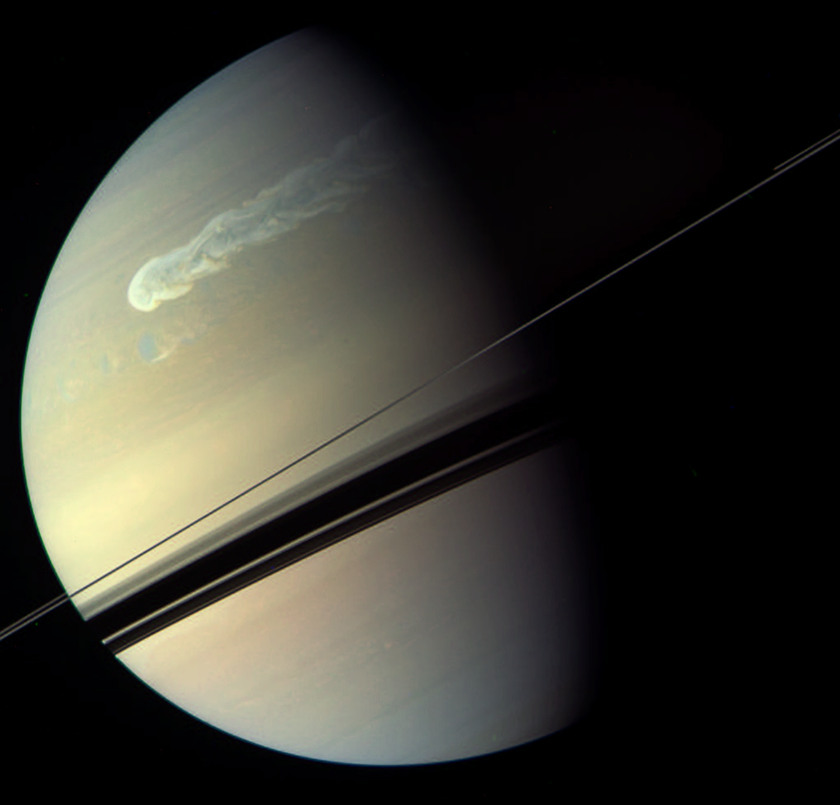 As part of its routine monitoring of Saturn's atmosphere, Cassini took the photos needed to compose this false-color composite view of the storm reaching across much of the planet's temperate northern latitudes on 4 February 2011. (The view is composed of three images taken through infrared, green, and blue filters.)

But I have to say that I am just amazed by how good a view an accomplished amateur can get -- and over a longer period of time than Cassini. Here's an animation from Christopher Go, whose observing site in the Philippines has been rained out for weeks but who finally managed to get a good night of observing in this weekend:

Amateur astronomer Christopher Go composed eight images of Saturn taken over a period of about half an hour into this animation showing Saturn's enormous storm moving with the planet's rotation.

I want to point out that Go's animation doesn't actually show any motion of the storm that we can see; all of the apparent motion is just from the very rapid rotation of Saturn. Still, it's an incredible amount of detail captured from more than 1.3 billion kilometers away, a distance almost 700 times greater than Cassini's distance from Saturn when it took the photo at the top of this entry.