Kepler announcement today: More than a thousand exoplanets including one 6-planet system

I wasn't able to watch the Kepler press briefing today so I will give you links to some of my favorite blogs for information on today's announcement, which follows a major data release last night as well as the publication of a paper in Nature. The bare facts, from the mission press release:

"The number of planet candidates identified by Kepler to-date [is] 1,235. Of these, 68 are approximately Earth-size; 288 are super-Earth-size; 662 are Neptune-size; 165 are the size of Jupiter and 19 are larger than Jupiter. Of the 54 new planet candidates found in the habitable zone, five are near Earth-sized. The remaining 49 habitable zone candidates range from super-Earth size -- up to twice the size of Earth -- to larger than Jupiter." In addition, they note "Kepler also found six confirmed planets orbiting a sun-like star, Kepler-11. This is the largest group of transiting planets orbiting a single star yet discovered outside our solar system."

Here's the paper published today in Nature, which doesn't concern the bulk of the planet discoveries, just one special system: "A closely packed system of low-mass, low-density planets transiting Kepler-11. The full article is behind their paywall but you can read the abstract; they also have a special feature page containing more perspective from Lee Billings and E. Samuel Reich.

Speaking of Lee Billings, he did a bang-up job live-Tweeting the press briefing.

Anything that is already available in blogs is based just on the Nature paper, not on the other details they discussed today, except for this excellent perspective from astronomer Franck Marchis, who says: "Today, with the release of 1,202 exoplanet candidates from data collected with the Kepler spacecraft over 140 days of observation, we have just entered in a new age of astronomy."

For perspectives on the six-planet system, check out what Sky and Telescope's Bob Naeye and Bad Astronomer Phil Plait have to say.

And don't forget that you can help with discoveries at planethunters.org! 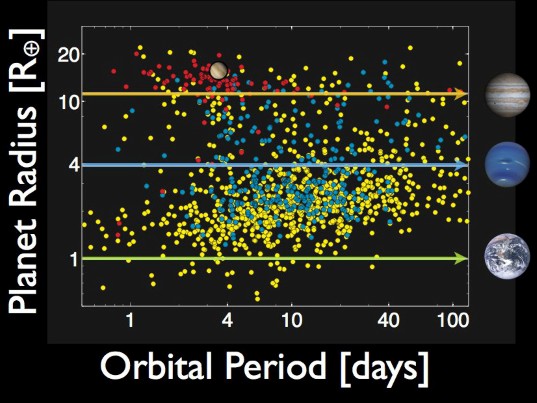 From the Kepler mission's Facebook page: "As of February 1, 2011, there were 91 transiting exoplanets in the catalog maintained by exoplanets.org, 11 of which are in the area of the sky observed by Kepler (red). In June 2010, the team released 312 new transiting planet candidates (blue). Today [February 2], our total count is a staggering 1,235 potential new worlds (yellow), 18 of which are confirmed planets. We compute the total (planets+Kepler Candidates) as 91 - 11 + 1235 = 1315."