I've spent the day noodling around in the current issue of Icarus, following up some of the more interesting stories within its table of contents, and came across a picture of this very cool crater -- actually, set of craters -- on Mars: 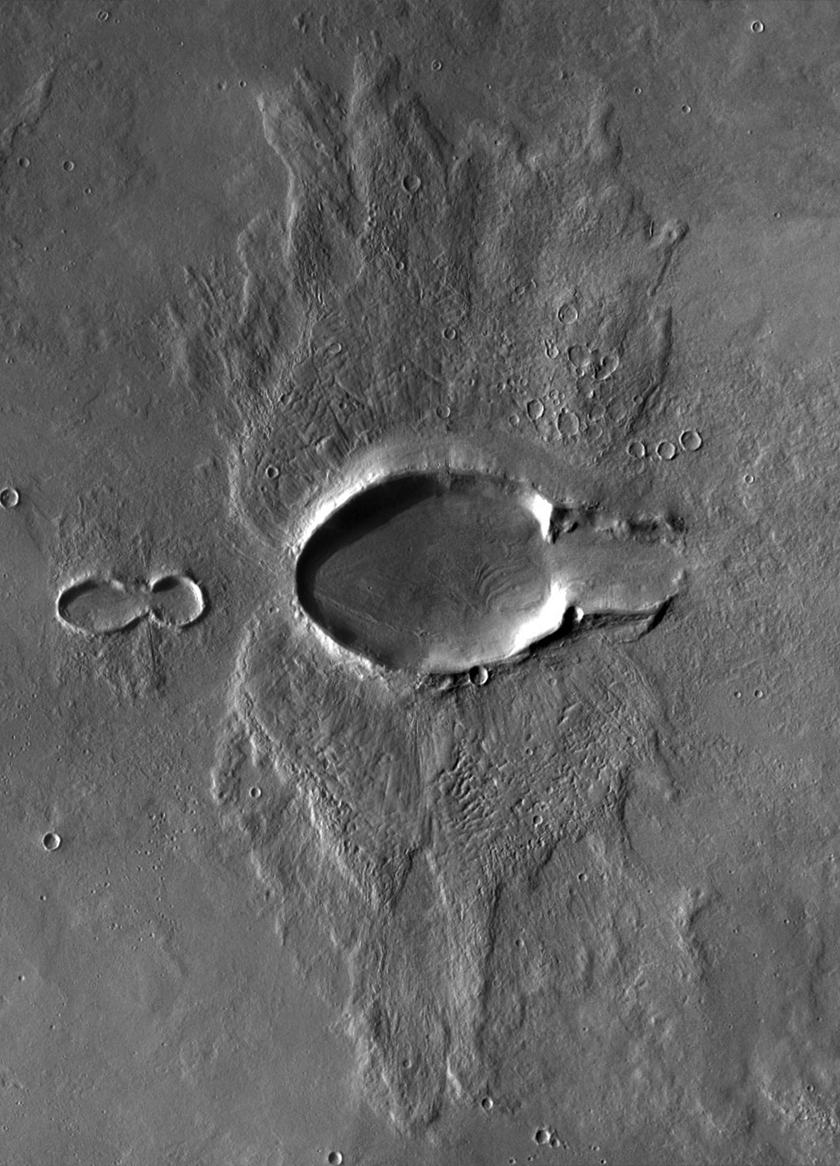 A very unusual elongated crater located north of Acheron Fossae on Mars. The crater is 15 kilometers long but only half that wide.

According to Chappelow and Herrick, the craters are relatively young in terms of Martian geologic history ("late Hesperian" in age). Their elongated shape and the butterfly pattern to the splat of ejecta that was blasted out when the craters formed both indicate that the impact that formed them was a highly oblique one -- that is, the impactor came in at a very low angle, less than 10 degrees, to the ground. The "forbidden zone" in the pattern of ejecta tells you that the impactor was coming from west to east. Given the fact that the two elongated craters, large and small, have exactly the same orientation and midline, they almost certainly formed in the same impact event. The big crater is 10 kilometers long by 7.5 wide; the small one is 2 by 3 kilometers; the small one lies 12.5 kilometers uprange of the large one.

What could have formed this crater? The authors explored five hypotheses:

After a great deal of analysis, here's what they concluded about the five hypotheses. Case 1 was eliminated because asteroids approach Mars at such high speeds (at least 5 kilometers per second and averaging more like 10) that there is not enough time for differential drag to separate the parts of an asteroid that broke up in the atmosphere at all, much less by 12.5 kilometers. They tried to see if it would help to assume the impactor was a comet; it didn't.

Cases 2 and 3 were pretty similar; they were eliminated because it is exceedingly unlikely that the two components would arrive in an exactly straight line, causing the two craters not only to have parallel but collinear long axes as they do; with a little analysis of the other craters surveyed on Mars they came up with odds being "1-in-50 that one of the 9 observed butterfly craters on Mars would be a double, oblique impact with the smaller crater dirctly uprange of the larger."

Their analysis of Case 4 showed it to be eminently reasonable -- even assuming that the atmosphere was no thicker than today's -- and furthermore, that "If a moonlet did form the craters, then it would have an initial mass of about 5.83 x 1012 kilograms, and, assuming a density of 1800 kilograms per cubic meter, a diameter of about 1800 meters, or about 1600 meters if its density were 2500 kilograms per cubic meter. In fact, these represent minimum values, the blowouts at the east ends of the craters, and the extremely shallow predicted impact angles suggest that significant fractions of the projectiles may have 'ricocheted' upon impact, carrying their impact energies downrange with them. If this is the case, the moonlet would have had to be larger."

After analysis of the situation, Case 5 was found to be a "very low-order probability."

So: the picture at the top of this post most likely represents the final moment of a moon of Mars that is no more. The hypothetical mini-moonlet whose orbital decay would have formed this crater would have been in a prograde orbit, like that of Phobos and Deimos. And Phobos' orbit is decaying, bringing the moon in closer and closer to Mars, traveling faster and faster, with every passing moment. Eventually Phobos will suffer the same fate, though it will probably make a bigger crater; Phobos is an order of magnitude larger in diameter than the proposed moonlet, and between two and three orders of magnitude more massive.