Radar topographic view of a volcano

Quick -- where is this? Is it one of Venus' iconic volcanoes? Or maybe Mars'?

The first bistatic radar image acquired by the twin satellites TanDEM-X and TerraSAR-X shows the Italian volcano Mount Etna, on the east coast of Sicily. On the left of the image, below the flank of the volcano, the city of Catania can be seen as a collection of bright points. This image, acquired while the satellites were orbiting at a distance of only 350 meters from one another, is the world's first to be made using such a close satellite formation.

Nope. It's Mount Etna on Earth, with its vegetation mostly stripped away, viewed in detailed 3D by a pair of radar imaging satellites, TanDEM-X and TerraSAR-X. Radar imaging is used elsewhere in the solar system to peer through thick atmospheres. It's useful here on Earth, too, to peel away clouds as well as some or all (depending on the wavelength) of the transient living material that is so pesky to geologists who just want to get a good view of what's happening on the ground.

This image is the first of its kind. Radar imaging of Earth has been done before, for decades, by a lot of different spacecraft including even the Shuttles (search around on "Shuttle Imaging Radar" for more on that). This is a little different because TanDEM-X and TerraSAR-X are whizzing around Earth in tight formation, only 350 meters from each other. They're employing bistatic radar -- broadcasting a signal from one spacecraft that bounces off of Earth and is received by both of them -- to achieve spectacularly high resolution digital elevation data on our home planet. The spacecraft take turns broadcasting, reducing the load on (and heating of) each one's systems, and the two are even sharing health information with each other via an intersatellite link.

Mount Etna is an active volcano, on the east coast of Sicily. On the left of the image, below the flank of the volcano, the city of Catania can be seen as a collection of bright points (probably because they are rough surfaces at the radar wavelength).

TanDEM-X and TerraSAR-X maneuvered into this close formation for the first time a week before this photo was released, on October 14 of last year. They'd previously been positioned 20 kilometers from each other (three seconds of flight time). DLR and Astrium, which operate the twin spacecraft, plan to keep them in this close formation for three years, after which they should have produced an incredibly precise digital elevation model of all of Earth's land surface. The topographic data you get from these missions is so detailed that geologists can actually use topographic data from different dates to watch how volcanoes like Etna are building -- both in obvious ways, like with the emplacement of new lava flows, and in less obvious (but more ominous) ways, like the inflation of the dome within its peak crater. 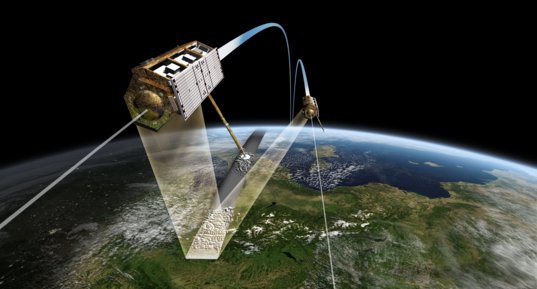