Today the 365 Days of Astronomy podcast aired my contribution, Unmanned Space Exploration in 2011, about what to look forward to in solar system exploration this year. Regular readers will know that I do these updates in the blog once a month; here's a link to the January and December updates, and of course you can look forward to a February one in two weeks or so. There's lots of stuff going on up there! 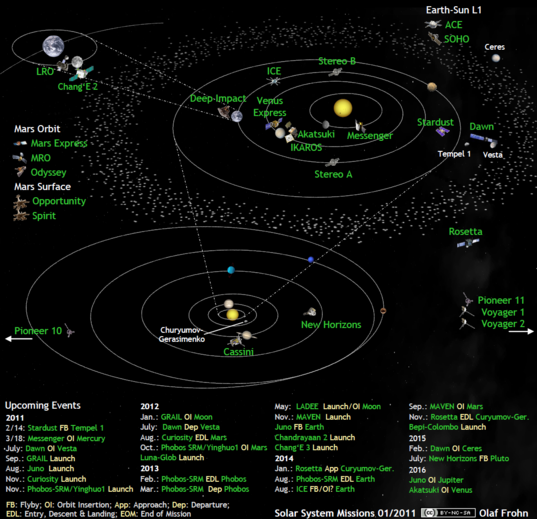 Hi, I'm Emily Lakdawalla from the Planetary Society, and I'm here to tell you about what an exciting year 2011 is shaping up to be in solar system exploration. In fact I'd argue that we're in the middle of the greatest age ever in planetary exploration. Did you know that there's more than twenty spacecraft out there exploring our solar system? They're at Venus, the Moon, Mars, and Saturn. They're on their way to Mercury, asteroids, comets, and dwarf planets. And there's four more scheduled for launch later this year.

The three events that I am most looking forward to in 2011 are encounters with a comet, the smallest planet, and one of the biggest asteroids. The first big event will be Stardust's flyby of comet Tempel 1, on Valentine's day -- that's February 14. Stardust is a spacecraft that has a second lease on life. It launched twelve years ago to fly past comet Wild 2, gathering particles from the comet's tail in a sample return capsule. Stardust returned its capsule to Earth five years ago, but continued on its own orbit around the Sun. Now it is being sent to a second comet, the one that was smashed in to by Deep Impact in 2005. Deep Impact left some unfinished business at Tempel 1. It successfully smashed an impactor into the comet and took lots of pictures and other data. But the crash tossed up so much dust that Deep Impact never saw the crater that it created. Now Tempel 1 has completed an orbit around the Sun, passing through its perihelion, and Stardust is going back for a second look. Hopefully Stardust will finally get that picture of the Deep Impact crater, and maybe see some changes on the comet's nucleus in the nearly six years that have passed since Deep Impact's flyby. But because the rotation rate of the comet nucleus isn't totally precisely known, there's actually a chance that Stardust will not get to see the right side of the comet to solve the mystery of the crater diameter. If that happens, though, there'll be a silver lining: Stardust will image the half of the comet that Deep Impact didn't see.

The next main event for 2011 will be at the smallest planet, Mercury, which will finally earn its first orbiter. Considering how close it is to Earth, it's amazing that Mercury hasn't had a dedicated orbiter yet. It's just hard to get into orbit at Mercury because it is such a small planet located so very close to the massive Sun. So it's taken more than six years for MESSENGER to get there, and it'll enter orbit on March 18. MESSENGER needed one flyby of Earth, two of Venus, and three of Mercury to help adjust its orbit to one that nearly matches Mercury's. During its three Mercury flybys, which happened in 2008 and 2009, MESSENGER did manage to snap pictures of most of the planet, but the orbital mission will give MESSENGER a chance to make uniform maps of Mercury. It'll also map the planet's topography for the first time, map the composition of its surface rocks, map its magnetic field, and study the atmosphere. Yes, Mercury has an atmosphere, but it's so thin that atoms in the atmosphere almost never bump in to each other. The atmosphere is made mostly of ions that are blasted off of Mercury's surface by the solar wind.

But the event that I'm really looking forward to happens this summer, when the Dawn spacecraft arrives at Vesta. But "arrival" might be the wrong word. It's not like most orbital missions where there's a death-defying orbital insertion maneuver and mad thruster firings to quickly brake the spacecraft into orbit. Vesta is a small world without much gravity, so that wouldn't work. Vesta is only about 500 kilometers in diameter, about the same size as Saturn's moon Enceladus, or less than a sixth the diameter of our own Moon.

So instead of depending on one big rocket firing, Dawn's been working on matching its orbit with Vesta. It'll slowly creep up on the asteroid throughout July. The dates are uncertain because they depend in part on how well Dawn's ion thrusters perform. Some time in late July, Dawn will gently slip into orbit around Vesta and continue spiraling downward. Its first orbit will take 10 days; its second will take 4. By the time it approaches to 2700 kilometers above Vesta, it'll be in a 3-day orbit and will stop descending for about three weeks while it maps Vesta from a distance. Then it'll go down farther, orbiting faster and getting higher-resolution images and spectra. Once it's in its low-altitude mapping orbit, about 180 kilometers, Dawn will be close enough to Vesta for lumps and bumps in Vesta's shape to cause the spacecraft's orbit to have lumps and bumps that'll be measurable through the Doppler shifting of its radio communications with Earth. Dawn will spend a full year at Vesta before departing for its journey to the biggest asteroid, Ceres, in July 2012.

After Dawn arrives at Vesta, we will enter launch season. There isn't usually a specific season when planetary launches happen, but for some reason in 2011 all the major launches are clustered together on the calendar, which must be a big headache for NASA. First up is Juno, which will launch for Jupiter in August. Juno is designed to study the atmosphere and interior of Jupiter, answering major questions about the biggest planet's composition, the size of its core, and the origin of its magnetic field, among other things. None of these mission objectives require a camera, but don't worry, Juno will have a small, color camera called JunoCam that has been included on the mission primarily because no one could bear to send a spacecraft all the way to Jupiter without sending a camera with it. But it's going to take a while for Juno to get there. After its launch it will spend its first two years in the inner solar system. A gravity-assist flyby of Earth in 2013 will send it on to a Jupiter arrival three years later, in 2016.

After Juno comes GRAIL. Scheduled to launch in September, GRAIL is actually a pair of spacecraft that will orbit the Moon in tandem. Once the spacecraft arrive in orbit in January, they'll use highly precise radio signals transmitted and received between the two spacecraft and Earth to map the gravity field of the Moon, which will tell us about the distribution of mass in the Moon's interior. This is an experiment that's actually been performed before, by Japan's Kaguya mission and its two minisatellites Okina and Ouna. But GRAIL's map will have twice the map resolution of Kaguya's, and what's more, it'll be a hundred times more precise. The better map resolution is because GRAIL's orbit will be twice as close to the Moon as Kaguya's was, only 50 kilometers above the surface.

Then, late in 2011 there's two launches to Mars, with three spacecraft. Mars launch opportunities come once every 26 months. The last one was in fall of 2009. Two launches were supposed to happen then, but neither spacecraft was ready at the time, so both launch dates had to slip the full 26 months.

One of the Mars launches will be NASA's next big rover. The rover has been named Curiosity by NASA but most scientists will probably continue to refer to it by its acronym, MSL, which stands for Mars Science Laboratory, although it used to stand for Mars Smart Lander. I hate acronyms so will be sticking to calling it Curiosity. Curiosity is much, much larger than the Mars Exploration Rovers Spirit and Opportunity. The enormous size is because it is carrying a much, much bigger science package than Spirit and Opportunity did; basically, Curiosity has the kind of capable analytical chemical laboratory on board that has so far only been put down on Mars on landers. They haven't picked Curiosity's landing site yet, but it's going to be going to some place on Mars where there was liquid water for a long enough period of time to produce an environment that might once have been livable for past organisms. NASA's careful to say that Curiosity's not looking for life, or even really for fossils, just evidence for the past existence of the kinds of environments that might once have supported life. This is all a bit lawyerly. A key fact is that the landing site, whatever it is, should wind up having more spectacular scenery than Spirit and Opportunity had when they landed, because Curiosity's landing system permits a more precise landing in the midst of a bit more interesting terrain. However, like Spirit and Opportunity, Curiosity will likely have some long, slow driving to do before it gets to the really interesting stuff.

The other Mars launch will be Russia's Phobos Sample Return mission, also known as Phobos-Grunt. "Grunt" means "soil" or "ground" in Russian. Apparently my former boss Lou Friedman clued the Russians in that Grunt sounds a little odd in English and now they're calling it Phobos Sample Return or P-h-S-R-M instead, which makes me kind of sad. Anyway, Phobos-Grunt will launch to Mars, nudge into an orbit that follows Mars' moon Phobos, and study Mars and its moons for some time. Then the whole spacecraft will set down onto Mars' smaller moon, take a sample of the soil, pack it into a capsule, and then fire a small sample return spacecraft back to Earth. A Chinese orbiter will hitch a ride to Mars aboard Phobos-Grunt; once it's there, it'll study Mars' atmosphere. Yinghuo-1 will also have an orbit that will enable it to take good pictures of Deimos -- in fact, it may have the best chance since Viking to take pictures of that moon. Another stowaway on Phobos-Grunt is a small experiment provided by the Planetary Society called Phobos LIFE. LIFE is a hockey-puck-size chamber deep within the sample return capsule that'll carry microorganisms to Mars and back. Once the sample capsule is received on Earth, biologists will examine the LIFE organisms to see if they have suffered any damage from the years spent in space. You can learn more about LIFE on our website at planetary.org.

So that's all the new stuff that's happening in 2011. Meanwhile, there's already lots of other activity in space that will continue throughout the year. Europe has two spacecraft at Venus and Mars, named Venus Express and Mars Express. The Moon has two orbiters, NASA's Lunar Reconnaissance Orbiter and China's Chang'E 2. Mars has two other orbiters, Mars Odyssey and Mars Reconnaissance Orbiter. The Opportunity rover is rolling across Mars, and hopefully we'll hear again from a hibernating Spirit rover this year. The Cassini orbiter has just won a seven-year mission extension at Saturn, and will have close flybys of Enceladus, Rhea, and Dione this year. And apart from all of these there are lots of other ships cruising from place to place, like Europe's Rosetta comet mission and NASA's New Horizons Pluto mission. And then there's always the two Voyagers, which are venturing out beyond the solar system into interstellar space.

It's going to be a great year, and I will write about all of these missions and post lots of beautiful images at planetary dot org slash blog. This has been Emily Lakdawalla for the Planetary Society blog. Thanks for listening!