Ready for the New Year? It's going to be an exciting one. Those of you who are reading this and who are going to New Year's Eve parties and who are geeky enough to bring up your interest in space in casual conversation may well hear comments like "how do you feel about the end of the space program?" I get that a lot. There's a couple of ways you could reply to such a comment, but my favorite way is to tell people that, contrary to what seems to be a general impression caused by the current lack of direction for NASA's human space exploration program, we're actually living through the greatest age ever of robotic exploration of the solar system.

If they are curious how you could make that comment, explain that we -- and by "we" I mean "humans" -- have sent robots everywhere, more places than ever before. There are two spaceships at the Moon and four (hopefully five, but we're sure of four) exploring Mars. We have one at Venus and one arriving at Mercury in March. We have one at Saturn and one on the way to Pluto. And a dozen more. Tell them about how in July, Dawn will see a world like no one's ever seen before, an enormous not-quite-a-planet named Vesta. Or how Opportunity and Cassini are still returning hundreds of pictures a day from Mars and Saturn, pictures that get sent straight to the Web for everyone to enjoy. It's important to advocate for the future of human exploration as well, but at a time when everyone is feeling celebratory and looking forward to the next year, let's all think positive and be vocal in support of all the amazing things that the space programs of the world are accomplishing right now, or about to do in 2011, with robots!

There wouldn't be so much happening in space right now if it weren't for the vocal support of space fans, both individually and through organizations like the Planetary Society. If you want to add your voice to the tens of thousands of others who speak through us to support space exploration, please consider joining the Society or making a donation.

Without further ado, I'll get on to all the exciting happenings planned for January and the rest of 2011. First of all, here's Olaf Frohn's marvelous map of where all of our explorers are on January 1. Compare it to last month's diagramto see how things have moved. 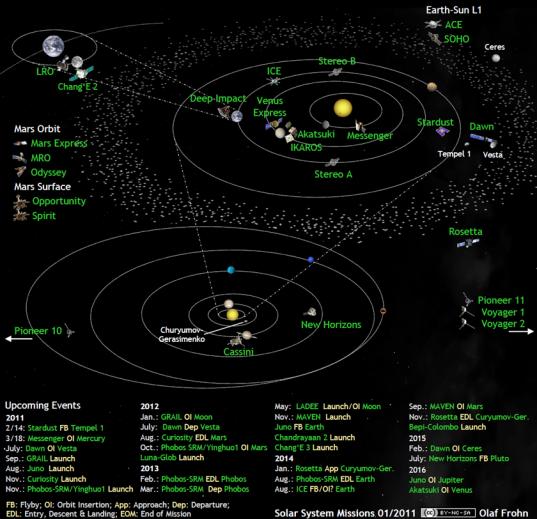 NASA's MESSENGER spacecraft is getting so very close. Only 77 days remain until Mercury orbit insertion (which is planned for March 18, 2011). They've only been releasing one image every two weeks or so to their gallery but that rate should pick up once they arrive in orbit! I do not know if they have plans to do regular raw image releases or not -- we will have to wait and see..

ESA's Venus Express, whose mission is now extended through 2014, will remain the only spacecraft at Venus for a long, long time, now that Akatsuki has missed entering orbit.

NASA's NASA's Lunar Reconnaissance Orbiter is busily mapping the Moon from its science orbit. They continue to select terrific photos to publish in their gallery. My favorite recent image (as much for its title as anything else) is this "Multi-temporal illumination map of the lunar south pole."

Out at Mars, it's early spring in the southern hemisphere, so the rovers' days are now longer than their nights. (It's currently Ls 208.3°.) Today it is Mars Exploration Rover Spirit sol 2486 and Opportunity sol 2465. Spirit has still not been heard from since sol 2210 (March 22). It's now getting less likely that we'll ever hear from Spirit again. But there is still reason to hope -- and more than hope, to keep commanding Odyssey to listen for that elusive signal. Meanwhile, Opportunity put about 1000 meters on the odometer in December, which is just staggering, considering how old the rover is. That put her at the edge of Santa Maria crater, a beautiful impact crater that's about 100 meters across, which Opportunity will explore for several more weeks. Santa Maria is interesting but the main reason that they are stopping for so long is that Mars will be going through solar conjunction on February 4, and they can't command the rover (or the orbiters, for that matter) for about two weeks or so while the Sun with all its radio noise is so close to Mars in the sky. So next month's update will likely see Opportunity in more or less the same position she is now. After that, though, it's on to Endeavour. If 2011 is anything like 2010 -- and it should be better, given that the Martian summer is coming, and with it, lots of power to the rover -- we stand a chance of being at the foot of Endeavour's ancient rim and its promise of ancient clay minerals by the end of 2011. If we aren't there, we'll be close; I know that the Mars Exploration Rover mission is quite motivated to reach those water-laid rocks before the Curiosity rover gets to Mars in 2012! Here is Eduardo Tesheiner's latest route map and Google Earth kml file for Opportunity.

ESA's Mars Express mission posted a picture from Schiaparelli crater last month. In this month's Mars Webcam photos, Mars has grown nearly to quarter phase; the phase of Mars Webcam images results from the current location of Mars Express' orbital apoapsis. Many of the recent images feature pretty clouds encircling the north pole. Like Venus Express, Mars Express' mission has been extended through 2014; they're doing lots of work now to map Phobos for the upcoming Phobos-Grunt sample return mission.

NASA's Mars Reconnaissance Orbiter will spend 2011 as it has past years, monitoring Mars' weather and taking photo after detailed photo of the surface. From the MARCI weather team there was a really cute poem posted last week that I wish I had noticed before Christmas. "The water ice clouds, they formed in some places, / Sometimes being thick, sometimes just traces. / They were seen over Pavonis Mons! Over Arsia! Over Arcadia and Acidalia! Over Tempe! Over Syrtis Major! And a few over Daedalia!..." As always, check in on the latest captioned image releases from HiRISE for your dose of spectacular photos. Possible active dune gullies are cool, and they've also posted several photos of those Acidalian mud volcanoes, like this one and this one.

NASA's Mars Odyssey is now the longest-lived spacecraft ever to operate at Mars, and will presumably keep going through 2011 -- though it's dangerous to take such things for granted, as we saw with Mars Global Surveyor in 2006. You can see the latest from its THEMIS instrument here. I like this doublet crater with its splat of ejecta..

The NASA-ESA-ASI Cassini mission will have a busy 2011. It will orbit Saturn 17 times, spending the entire year very close to Saturn's ring plane, which means there'll be lots and lots of fine moon-imaging opportunities, but we won't be able to appreciate the glorious ring system from above or below. (Don't worry, ring fans, you'll get years' worth of ring images starting in mid-2012.) Cassini's flyby plans for 2011 include six targeted flybys of Titan throughout the year, one of Rhea on January 11, three of Enceladus in October and November, and one of Dione in December. But the biggest news from Saturn happening right now is independent of Cassini: there is a gargantuan storm stretching across a significant fraction of the northern hemisphere, so big that it's readily visible through the sharp-eyed telescopes of the serious amateur astronomers whose work I've featured here before. Cassini's imaging is planned like a year in advance so they aren't going to be doing any special imaging of the storm (at least not right away), but it's caught some amazing views in routine wide-angle imaging of the planet, like those shown here. Tomorrow it begins Rev 143, a 21-day orbit. Jason Perry's "Looking Ahead" article for Rev 143 was just posted minutes ago, and it explains the plans for the Rhea flyby (which include another search for its elusive ring and imaging of the dark line of tiny craters that lies on its equator), as well as what Saturn images throughout the month are likely to contain the great new storm.

Stardust spacecraft is now only 46 days away from its planned flyby of comet Tempel 1 and should have acquired its first images of the comet on December 16; daily imaging should begin on January 4. Closest approach will happen at 8:42 p.m. PST on February 14, 2011, or 04:42 February 15 UTC. This will be the first ever repeat visit to a comet, and I can't wait to compare Stardust's views of Tempel 1 to Deep Impact's, taken more than five years ago. The latest mission status update is slightly worrying, though; Stardust experienced a third "safe mode" event on December 9. A tiger team was convened to address what to do about these safing events with the flyby coming up so soon, and they have decided to do a "cold reboot" of the spacecraft on January 4. More information is here.

NASA's Dawn has now been in space for three years. It continues patiently propelling itself toward a rendezvous with Vesta in July 2011, only 198 days away. I have to say that Vesta is the event I'm most looking forward to next year.

NASA's New Horizons has 13.33 AU to go to reach Pluto. It's still on course for a January to July 2015 encounter with the Pluto and Charon system. There are 1656 days left until Pluto closest approach.

Deep Impact has completed its "EPOXI" mission extension, in which it studied extrasolar planets and encountered comet Hartley 2. NASA is now soliciting proposals for another mission extension. Sadly, there's not enough fuel remaining to target a third comet, but it could conceivably be used for more exoplanet observations from its current orbit.

JAXA's Akatsuki is now in solar orbit, beginning its long cruise to a second encounter with Venus in December 2016. According to the latest update from the Daily Yomiuri newspaper, it's not yet known whether it will be able to enter orbit in 2016, even if it remains in good health.

JAXA's IKAROS flew past Venus in December and has been operating successfully since May 21, 2010, really an amazing accomplishment for such a small, experimental craft. According to the latest entry in the IKAROS blog, they aren't sure how long the spacecraft can carry on, but they certainly plan to keep operating it into the New Year.

ESA's Rosetta mission is preparing to hibernate from July 2011 to January 2014. The next object it'll encounter will be its goal, comet 67/P Churyumov-Gerasimenko; rendezvous is set for May 2014.

Some other milestones to take note of in January, taken from JPL's Space Calendar: