As 2010 waned I've been watching @SungrazerComets on Twitter, which has been maintaining a count of how many comets the Solar and Heliospheric Observatory (SOHO) has discovered during its mission. SOHO was launched more than 15 years ago to study the Sun, primarily; but a side benefit of its constant observation of the Sun has been its ability to notice "sungrazers," comets that are on deadly close approaches to our star. As December passed, the numbers have been ticking upward into the high 1900s, and finally, yesterday, they announced the discovery of SOHO's 2000th comet. (For context, SOHO has discovered well over half of all comets ever observed.) Here it is: 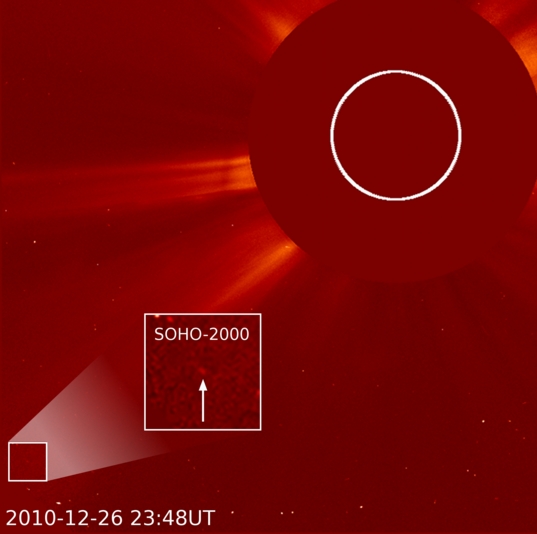 SOHO's LASCO camera has, as of December 26, 2010, discovered more than 2000 comets, with some help from amateur comet-hunters. The 2000th comet was found in SOHO images by Polish astronomy student Michal Kusiak.

A neat feature of this story (there's more info on NASA's website) is that the comet discoveries are enabled by the volunteer work of amateurs. There are more amateurs now doing this comet investigation than there used to be, which is one reason that SOHO's comet discoveries have been accelerating -- it took ten years to find the first 1000, but only five more years to find the second 1000. However, amateur help isn't enough to explain the increased discovery rate: it's "also due to an unexplained systematic increase in the number of comets around the sun. Indeed, December alone has seen an unprecedented 37 new comets spotted so far, a number high enough to qualify as a 'comet storm.'" Cool!