Today the 365 Days of Astronomy podcast aired my contribution, Small Worlds, about the smaller denizens of the solar system visited in the past year, and due to be visited in the next. Here's the perfect illustration for the show, followed by the transcript. 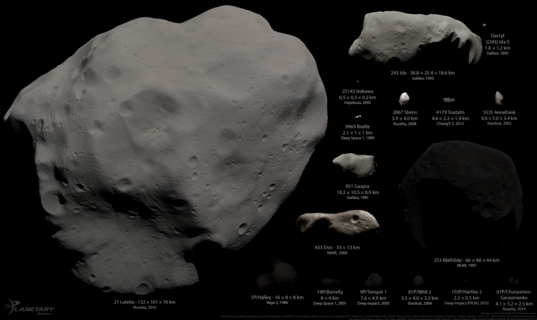 This image is also available as a larger version at 20 meters per pixel; if you prefer, you can download a version without text. Both are 8600x6250 pixels, 9.4 MB.

This montage is freely available to researchers and educators for use in presentations. If you would like to use it in print, please send Emily Lakdawalla an email and please preserve the credit information for the data sources and processing work, as far as space allows.

And now for the transcript:

I'm here to speak up for the little guy. There's been a lot of debate over the past five years about what things count as planets and what don't. Whenever I hear people arguing about what's a planet, I always think about the things that'll never be admitted to that exclusive club. Across the solar system there are countless moons, asteroids, and comets, of all sizes and shapes. There's great round moons like Ganymede and Titan, both of which are larger and more dynamic than the planet Mercury. And there are tiny things like Itokawa and Dactyl, which have been visited once by a spacecraft and very likely will never be visited again. Each of these non-planets has a unique surface and its own complex origin story just waiting to be told.

The last year has been a great one for the exploration of the solar system's smaller bodies, and next year'll be a great one too. In 2010, there were two close encounters with small bodies. First, Europe's Rosetta mission, which will eventually go into orbit around a comet, flew past an asteroid named Lutetia. Lutetia was by far the biggest asteroid ever visited by a spacecraft. It's 132 kilometers long by 76 kilometers high, making it similar in size to Los Angeles County, or to the island of Corsica. The pictures from Rosetta showed it to be very lumpy, with lots of craters, which was expected. But there were surprising features too. It has grooves, sets of parallel gouges marching across its surface. In some places, the grooves just look like straight troughs, but in most places, they look like chains of craters. Lutetia is not the only solar system body with grooves. Mars' moon Phobos, which is quite a bit smaller than Lutetia, also has lots and lots of grooves.

The natural question is, what makes these things groovy? What can make chains of craters? There are two main ways you can make lines of craters all in a row. One is to have a line of impactors all in a row. Astronomers actually witnessed this happening once, when a comet named Shoemaker-Levy 9 approached too close to Jupiter. The powerful force of Jupiter's gravity ripped apart the nucleus of the comet, separating it into a long string of more than twenty distinct fragments. The fragments eventually all crashed in to Jupiter's clouds. You also see lots of chains of impacts on the Moon, where one big impact tossed out spinning blocks of ejecta that split into trains of smaller blocks that then crashed down in a long line.

There's another way to make grooves, from the inside rather than the outside. The force of a large impact could be so great that it could fracture a small body like Phobos or Lutetia right through, opening up a crack. The body would still hold together under its own gravity, but the expansion and contraction of the body heating and cooling during daytime and nighttime could open and close that crack. Dust from the surface could fall in to the crack, and then hold it wider open. The places where dust falls in become collapse pits, and they'd be right in a row, all along the crack.

The other big encounter that happened last year was Deep Impact's flyby of Hartley 2. Deep Impact originally flew past a different comet, Tempel 1; this flyby of Hartley 2 was a bonus that came five years after the primary mission ended. Tempel 1 was a relatively big, relatively inactive comet. Hartley 2 is a very small, very active comet. It's barely more than two kilometers long, so it's one of the smallest things ever visited by a spacecraft, and it was just fountaining with comet jets when Deep Impact flew past it in November. Hartley 2′s fountains contained gaseous water vapor, plus a snowstorm of solid water ice particles, lots of carbon dioxide, and lots of dust. The mission team says that Hartley 2 has to have big pockets of solid carbon dioxide inside it to make those jets and blast out all that dust.

Deep Impact's photos showed Hartley 2 to have what I thought of as a dog bone shape with two lumpy ends and a very smooth middle. Other people saw a leg of fried chicken. That shape reminded me a lot of the very smallest asteroid ever visited by a spacecraft, the little cheez-doodle shape of Itokawa, a lonely object that's only five by two hundred meters across. Itokawa also has two bulbous ends and a waist with smoother material. It's a real surprise that such small things as Itokawa and Hartley 2 have regional geology, where their surfaces look different from place to place. Imagine yourself on Itokawa. You'd be floating above its surface, because it's too small to have gravity powerful enough to pull you down. Maybe you could pull yourself hand-over-hand across it using ski poles. At one point, you'd find yourself floating among boulders much bigger than you. Suddenly, you'd cross an invisible boundary and there'd be no boulders, just a surface of rough gravel.

How can things get sorted by size on a place as small as Itokawa? Its gravity is slight but it's enough for there to be places that are uphill and places there are downhill. Whenever something smashes in to Itokawa, which happens from time to time in the asteroid belt, the whole world is set shaking. That shaking jiggles the rocks on the surface, and the gravelly stuff slides downhill toward the lowest-gravity areas. These round areas of smooth gravels on Itokawa are actually called ponds, because they are topographic lows, where downhill sliding stuff pools; but it's a pond of gravel, not water, and it takes eons for the stuff to flow downhill. Itokawa's not the only place with ponds. Much larger asteroids, like Eros, also have them.

Hartley 2′s bumpy similarity to Itokawa is only superficial. A comet like Hartley 2 probably doesn't have a lot of boulders on its surface. Instead, it probably has funky towers built around places where its jets are coming out, where larger particles float back to the surface and stick together, making fluffy aggregates that'd puff into snow if you were to try to grab one.

Next year we're going to see a lot more exciting encounters with the smaller bodies in the solar system. It'll start in January, when the Mars Express orbiter has a series of flybys of Phobos. Mars Express can see Phobos from all sides, and they're working on the best mapping ever done of its surface and its gravity field in order to prepare for the Russian Phobos-Grunt Sample Return Mission, which is planned for launch at the end of next year.

The next thing to look forward to is Stardust's flyby of Tempel 1 in February. Like Deep Impact, little Stardust finished its primary mission a long time ago, but it's still a healthy spacecraft, and they're now flying it back to Tempel 1. Tempel 1 was the original target of the Deep Impact mission. Deep Impact left some unfinished business there. It smashed an impactor into Tempel 1, which raised a cloud of ejecta representing samples from the comet's interior. Deep Impact studied that ejecta and learned about the comet's composition. But the cloud was so thick and dusty that it never cleared enough for Deep Impact to see the size and shape of the crater that it made, which would have told us a lot about how comets are structured inside -- whether they're layered, whether they're strong and cohesive or loosely fluffy. Stardust will have the first ever second chance to fly past a small body in the solar system, and they hope to get a picture of that crater to see its size and shape.

Then, in July, comes the event I'll be looking forward to all year. NASA's Dawn spacecraft will approach and enter orbit at Vesta. Vesta is the second or third largest asteroid. (It's tied in size with Pallas.) It's nearly six hundred kilometers across, making it similar in size to some of the mid-sized round moons of the outer solar system, like Mimas and Enceladus at Saturn and Miranda at Uranus. We know from Earth-based observations and Hubble photos that Vesta is a fairly round world but that it has a huge bite taken out of its south pole, probably the scar of a huge ancient impact, that may reveal the insides of this little proto-world all the way down to its core.

Vesta is going to be something like we've never seen before, a whole new type of world in the solar system. I'm a little worried that the general public won't understand just how cool and different this is, and how exploring it is as exciting as exploring a planet. Most people can list off most or all of the planets -- Mercury, Venus, Earth, Mars, Jupiter, Saturn, Uranus, and Neptune. But that list leaves out so many fascinating worlds, as diverse and dynamic as the planets. Even if they're not planets, they deserve attention and exploration. Places like Io and Callisto, Triton and Proteus, Haumea and Eris, Hygeia and Chiron. There are countless worlds out there, each a unique place waiting to be explored, and I can't wait to see them.

I try to give these worlds the respect they deserve at planetary dot org slash blog, where I write about space missions and the beautiful pictures they return to us. Check in regularly to see fantastic views of the surprising and strange landscapes to be found across the solar system. Thank you for listening.