Unless you live under a rock you probably know that there is a total lunar eclipse tonight, one that should be particularly favorable for viewing from North America but which will be at least partially visible to viewers in South America, Europe, and easternmost Asia and Australia too. Assuming, of course, that your skies are clear -- mine aren't! Some good places to go for times to view it in North America include Sky & Telescope and Stardate, and NASA is hosting a chat. Sadly, the eclipse website at GSFC, which is usually my favorite, appears to be down -- perhaps they're getting hit too hard today! But lunar eclipses aren't like solar eclipses; they're much easier to view. You need no special equipment to view them safely, and they last for hours. Just make a note of when's a good time to be outside in your part of the world, go out, and look up! For observers in Europe and South America, that's in the morning on the 21st; for observers in the U.S. it's the night of the 20th/wee hours of the morning on the 21st; for observers in eastern Asia, it's in the evening on the 21st. 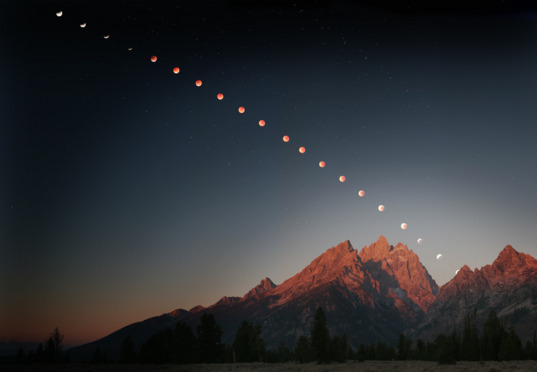 Lunar eclipse over the Grand Tetons

Tyler Nordgren captured this lunar eclipse sequence from his campsite in Grand Teton National Park on the night of August 29, 2007. He took an exposure of the moon every 10 minutes until it disappeared and the sun lit up the mountains with alpenglow.