Don't blink when you play the video below -- it's only 15 seconds long, but it's so cool. It's an animation composed of Viking 1 Orbiter images. It shows a dust storm over the spot on Mars where its lander was sitting. And, as you watch, you can see the shadow cast by Phobos shooting across the clouds. I don't know how Daniel Macháček spotted this in 33-year-old data. Hats off to him!

On September 28, 1977, Viking Orbiter 1 observed a dust storm over the site where it had dropped its lander, a little more than a year previously. As Viking 1 orbiter watched, the shadow of Mars' inner moon Phobos passed over the cloud tops. The sequence of images has been artificially colorized and is displayed at a speed ten times that of real time. (Viking images f467a31—f467a69)

Just think -- more than thirty years ago, a Martian lander was giving us our first views from the surface of another planet while an autonomous orbit observed the stormy weather swirling overhead. Daniel also sent me a bunch of the stills from this sequence. It's so hard to spot Phobos' shadow! 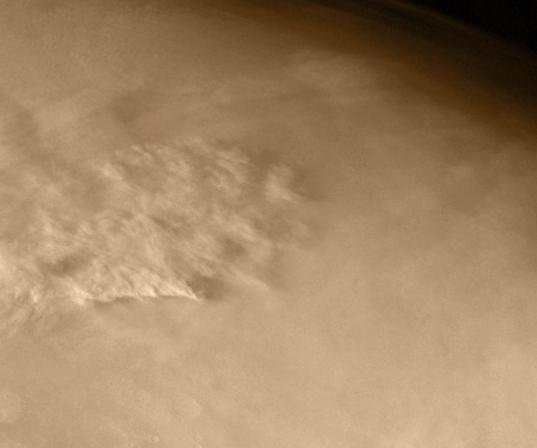 On September 28, 1977, the Viking 1 Orbiter turned toward the place where its lander had touched down (on July 20, 1976), witnessing the high clouds of a storm overhead. While Viking 1 studied the clouds, a visitor made itself known: Phobos, Mars' inner moon, whose shadow is cast on the cloud tops. This is just one frame from a series of 20, which are animated here and here.

Hopefully we'll be seeing more new pictures from Phobos soon; Mars Express is going to be having another series of encounters with the moon, and a Tweet from ESA suggests that they'll be reactivating the Mars Express blog to follow it.