Opportunity is on a kilometers-long eastward road trip across Meridiani Planum toward the rim of a large ancient crater named Endeavour; it'll be many months yet before she gets there. But she is just about to arrive at a major landmark by the side of the road, a good place to spend a night or two (maybe even two months) before hitting the road again: a 100-meter-diameter hole in the ground named Santa Maria.

You can follow the trek daily (even hourly), as I do, at unmannedspaceflight.com. All of us over there have been watching and waiting for Santa Maria's little rim to peek up above the horizon, something it started doing a few drives ago. As of sol 2447, which was Sunday, that rim had grown quite prominent, only 200 meters away:

On sol 2447 (December 12, 2010), Opportunity drew to within 200 meters of a reasonably large (100-meter-diameter) crater named Santa Maria. It has a noticeably upraised rim. The hills of the rim of Endeavour crater loom in the background.

Since then, on sol 2449, Opportunity has driven another 100 meters and is now only 90 meters away from the rim. [EDIT: Only an hour after I posted this, images from that drive became available; here's one version of a panorama, which shows great big boulders on the rim.] Rover driver Scott Maxwell has been sharing their driving progress on his Twitter feed, and said that the next sol's drive will likely take Opportunity another 70 meters closer, then they'll take one more drive to fine-tune the approach.

Once Opportunity gets to Santa Maria, they'll explore it for a few weeks. Santa Maria's a compelling target, so they'd've stopped there in any case, but they have two reasons to make the stay longer than they otherwise would. First, it's a matter of staffing; there's the holidays coming up, and on its Nth extension with a reduced budget the Mars Exploration Rover mission no longer works through nights or weekends or holidays the way it once did. They plan ahead for weekends and holiday periods, giving the rover lots to do more or less on its own without much expensive overtime effort exerted on the ground.

The other reason they'll be stopping for a while is that, on February 4, Mars will pass through conjunction, when it's at nearly the same position in the sky as the Sun. This makes radio communications difficult, because the Sun generates so much radio noise, and it doesn't help that this geometry also occurs when Mars is near its maximum distance from Earth, weakening spacecraft signals over the great distance. So there's a period of about two weeks when there'll be no commands uplinked to any of the Martian spacecraft, and no data downlinked (though I would guess that they probably will all still be sending at least carrier signals back to Earth; we can still detect that, and even use them to probe the Sun's atmosphere, if scientists are so inclined).

So that's the reason Opportunity's been pushing so hard to get to Santa Maria. She'll likely arrive this week, and they still have some time before conjunction to poke around and look at it from different directions, scoping out a really good spot to park and gather some data over the conjunction communications blackout period. I can't wait to see the crater from up close!

Get your 3D glasses to appreciate this anaglyph view of Santa Maria: 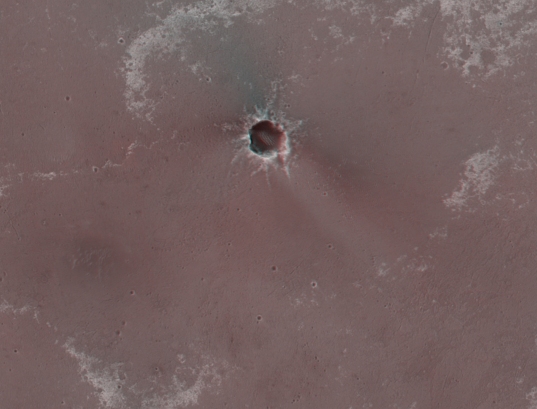 A red-blue HiRISE anaglyph of the 100-meter-diameter Santa Maria crater, which Opportunity approached in mid-December 2010.