An English-language article in the December 11 Yomiuri Shimbun (further disseminated by the Associated Press) summarizes the news from the Akatsuki press briefing held at 11:00 December 10 JST (last night, my time). It's succinct and clear so I'm reposting it here. If you go to the Yomiuri Shimbun site there is a good collection of links to other articles in English that summarize the previous developments. I'm afraid that this is mostly bad news.

The sudden loss of balance that prevented the Akatsuki space probe from going into orbit around Venus on Tuesday was due to a sudden drop in engine power likely caused by an insufficient supply of fuel, the Japan Aerospace Exploration Agency said Friday.

As the ceramic nozzle on Akatsuki's engine is believed to have been damaged, JAXA may find it difficult to put the probe into orbit around Venus when it comes close to the planet six years from now.

The agency analyzed data recorded while Akatsuki's orbit maneuvering engine was retrofiring to reduce the probe's velocity so it would be drawn by Venus' gravity into orbit around the planet. The data indicated the flow of fuel and changes in temperature around the engine.

It showed the pressure in the fuel tank began to drop immediately after the retrofiring, which caused the engine propulsion to slow.

The probe lost its balance two minutes 23 seconds after starting the maneuver, as engine propulsion had drastically weakened.

It remains unknown what caused the sudden slowdown in propulsion, but JAXA officials suspect problems with the engine burn, resulting from a lack of fuel, may have damaged the engine nozzle.

The fuel tank is supposed to maintain its internal pressure while the engine is being fired by injecting helium gas as fuel is pushed out. But the pressure in Akatsuki's tank is believed to have weakened as fuel was gradually consumed, making it impossible for the tank to properly supply fuel to the engine.

JAXA officials suspect there were faults in the pipes and valves used to inject helium.

When the space probe Nozomi was launched in 1998, it failed to fire its engine due to problems with the injection of helium, which led to lower pressure in the fuel tank.Here is some more detail on what was said at the press briefing; this information was originally Tweeted in Japanese by @ots_min and @ShinyaMatsuura and translated for me by @hee913758. I am very grateful for the effort that went in to this translation! I don't get quite all of it but copy it here anyway in case it's useful to people.

@ShinyaMatsuura (from his recap of the failure timeline on this site) 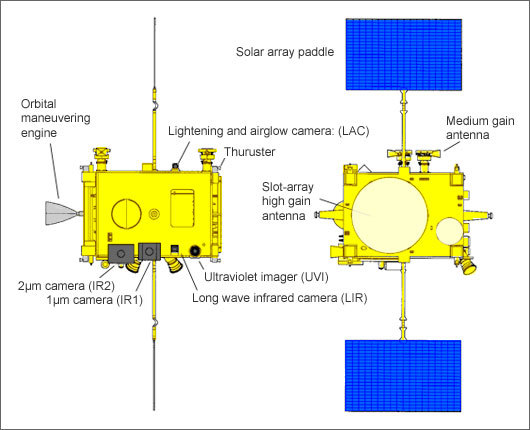