I've got two more pieces of information to share on Akatsuki further to what I posted yesterday. The first one is a worrying detail about what went wrong during orbit insertion. There was a plot released during the December 8 press briefings that I didn't understand, so I didn't repost it. Thanks to this article I now understand it to be a plot of the orientation of the spacecraft's three axes (X, Y, and Z) from the start of the orbit insertion maneuver (0 on the X-axis) to 150 seconds after the orbit insertion began. As you can see, there are some small rotations at the start of the maneuver, and particularly at about 56 seconds after the start. But then, suddenly, at about 145 seconds, the X-axis orientation suddenly massively swings. This is certainly not normal. I would be curious to hear from other people who know more about spacecraft than I do whether the smaller perturbations at the start and at 56 seconds would be considered nominal during a thruster firing -- even those seem a little large to me, but I don't know if they are. 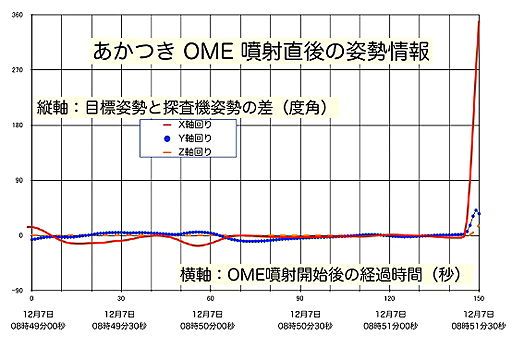 The X-axis shows time, in seconds, from the beginning of Akatsuki's attempted thruster firing at 23:49 on December 6, 2010 UTC. The Y-axis shows the orientation, in degrees, of the spacecraft's principal axes.

So the next obvious question is, if the spacecraft suddenly started spinning around its X axis -- the news article I linked to above said it was spinning once in five seconds, or 12 rpm, a pretty high rate -- what sudden force could have caused this? The important fact is that the Z axis is the one that is parallel to the direction of thruster fire, so the X axis is orthogonal to this. (A diagram of the spacecraft shows that the Y axis sprouts out of the spacecraft in the direction of its solar panel struts. The X axis is in the direction of the science instruments.) Something had to be shooting out of the spacecraft sideways. Some of the Tweets from the press briefing (which I linked to in yesterday's post) suggest that the team speculated that the main thruster nozzle -- which had worked fine in cruise -- had suffered some sudden damage.

Which would of course be very bad news for any attempt, six years from now, to try to enter orbit again.

The same news article says they have not yet determined whether there actually is any damage to the thruster nozzle. They don't have any self-monitoring camera that could reveal this. So they have to determine it through careful tests of thruster firings, to see whether it imparts the expected velocity to the spacecraft. Obviously, as the article says, if your thruster isn't firing in the direction you expect, "some fear it would upset the position again, you need to do very carefully."

The other thing I have to post is this nice little animation that demonstrates how it can take Akatsuki six more years to reunite with Venus. Thanks to Natsu Shigure for the pointer to this. (Note -- there's something funky about the video at the very start, but bear with it for about 9 seconds and the color will work properly.) Here's the original video in mp4 format.