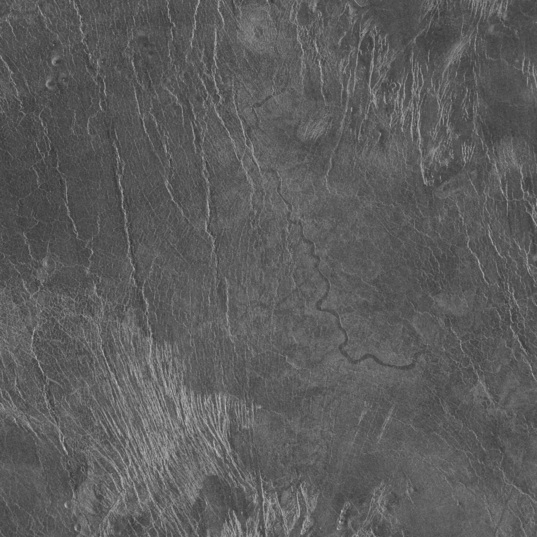 At full resolution, the image is 150 meters per pixel; the area shown is 222 kilometers square.

It's not a river, of course. It's one of Venus' enigmatic canali. Venus' canali (singular: canale) look much more like Earth's river valleys than the Moon's sinuous rilles do. This one is about 2 kilometers wide and the part of it in this image is nearly 200 kilometers long.

Venus does have some sinuous rilles that look much like those on the Moon: deep single channels, often originating in steep-walled pits, which get shallower and narrower along their lengths until they peter out. Sinuous rilles on both the Moon and Venus are presumed to have a volcanic origin. Canali are much longer than sinuous rilles; the longest one wanders 7,000 kilometers across Venus without changing in width. And they can meander and anastomose and have cutoff oxbows and even have tributaries and distributaries just like the braided channels of Earth's rivers. Look closely at this one and you'll see some faint tributaries, and I think I see a shallow one that actually crosses the main one, which really makes no sense.

This is Venus -- hot, volcanically surfaced Venus -- so a channel really can't conceivably have had anything liquid flowing in it other than some kind of lava. But why do canali look so different from lunar-type sinuous rilles? How can they have constant width throughout thousands of kilometers of length? How can lava have been flowing long enough to create braided channels, meanders, and oxbows? It's all very mysterious.

Elsewhere in the image, you can see little pimples of shield volcanoes that are about 2 or 3 kilometers across. And there's lots of wrinkle ridges, trending generally north to south.

In just a bit less than 24 hours, Venus will have not one but two orbiters. Akatsuki starts firing its engines to enter orbit at 23:49 UTC on December 6. You can be sure I'll be posting updates about that tomorrow!