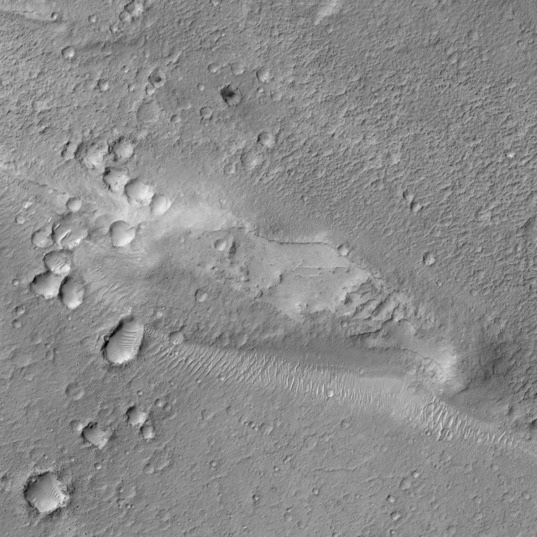 This image has a resolution (when fully enlarged) of 1 meter per pixel, so shows an area about 2.5 kilometers square.

I took this image. Or at least, I made a request through a computer system that was viewed by somebody who worked on a mission who elected to let this request become part of the mission's science plans. It's from HiRISE on Mars Reconnaissance Orbiter, and is one of three "HiWish" requests that I've had fulfilled. It shows a small streamlined island within one of Mars' largest outflow channels, Ares Vallis.

But, like my first fulfilled HiWish request, using the fantastic zooming ability of the powerful telescope on HiRISE has, unfortunately, not revealed much that is new about Martian outflow channels, because what we have zoomed in on is a landscape whose original shape has been almost annihilated by impact cratering, and then mantled by dust. When you look at it from a greater distance, you can make out the path of the channel, which is much, much, much wider than this image. But when you zoom in, it's mostly craters and dust.

This dusty, cratered landscape is typical for Mars, and even if I can't learn much geology from the picture, it's still pretty. The wind has built that dust into repeating fractal landscapes of dunes. The dunes make really cool patterns within craters, where the wind must have whipped and whorled around the crater rims to make swirly cross-breezes in the floor. There are hints of some interesting subsurface layering or, at least, structure within the wind-scoured top of the streamlined hummock. But, overall, it's frustratingly difficult to see past the craters and dust to get any understanding of what forces shaped these islands, and whether the liquid that flowed across this area from lower right to upper left flowed for a long time or a short time. I hope other people have had greater success with their HiWishes!