As I did last year, I'm hereby posting reviews and comments on every recent space book for kids that's crossed my desk in the last several months. The first three reviews were published in the September/October issue of The Planetary Report. 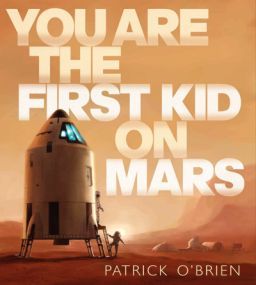 You Are the First Kid on Mars

This terrific book, told in the second person, asks "Would you like to go to Mars?" Then it takes you, the reader, up a space elevator, to a space station, to a space ship, to another station, and down to a habitat on Mars' surface, where you see how scientists and engineers use robots to maintain their colony, explore the world, and search for microscopic life.

By addressing his audience so directly, O'Brien effectively pulls the reader -- or kid listening to the story -- into this imagined future. O'Brien's 42 paintings are fully realized concepts of future technology and have a dimensional reality that adds to the immersive feel of the book. 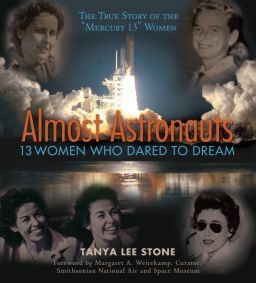 Almost Astronauts is by turns inspiring and enraging. It is the story of 13 women pilots who were selected, in 1961, to undergo the same (and in some cases, more stringent) harrowing physical and psychological testing that the seven Mercury astronauts underwent, and who passed these tests with flying colors. The project was the brainchild of Randolph Lovelace, the NASA doctor who tested the Mercury Seven. He wanted to know: with their lighter body mass and lower oxygen requirements, would women be more cost-effective astronauts than men? But by embarking on a scientific program to answer this question, he and the 13 women astronaut candidates plunged into the 1960s' swirling maelstrom of prejudice and politics.

Of course, those 13 women never made it to space, and it was not until 1999 that 8 of the surviving 11 were able to witness the first American space launch to be piloted by a woman.

The second half of the book details the tumultuous social changes in both the public and military spheres that were necessary before women could be admitted to the inner core of America's space program, first as mission specialists and later as shuttle pilots.

Although this story is often frustrating, the book is no feminist rant against past injustice. Instead, the reader is left with admiration for how brave, how resourceful, how strong, how capable these thirteen women were; how they competed on a very unequal playing field to achieve thousands of hours in the air as civilian pilots; and, once they were finally admitted into a program where they were tested no differently from the men, they rose to the challenge and demonstrated that they, too, had the legendary Right Stuff. They may never have made it to space, but because of their courageous struggle, later generations succeeded. 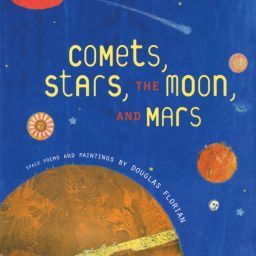 Comets, Stars, the Moon, and Mars

I think the book is suitable for kids down to age 3 or 4. It'd be an excellent resource for teaching poetry or collage in a language or visual arts class, and sneak in a little science!

Postcards from Pluto: A Tour of the Solar System

This book tours the solar system with the cute conceit of kid-written postcards from each planet, accompanied by acrylic paintings of kids discussing fun facts with a robot. It's much more fun than some of the more informational books about the solar system reviewed here, and I think more likely to be read alone by a child, though they'll need help with some of the words. It was last revised in 2006, before the demotion of Pluto. 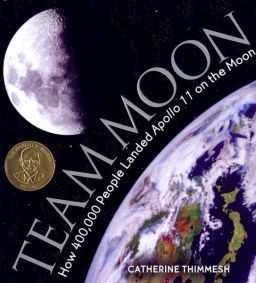 This account of the almost unbelievable effort it took to land the Apollo 11 astronauts on the Moon grips the reader from the start by quoting the speech that President Nixon had been prepared to give in the event that Armstrong and Aldrin died in the attempt. ("Fate has ordained that the men who went to the moon to explore in peace will stay on the moon to rest in peace.... ") There is a lot of text, but that text is dramatic, quoting dozens of the participants on Apollo's massive backstage, both well-known and obscure; It is lavishly illustrated with photographs, and beautifully designed. A treat in the last several pages is snapshots of the people who are quoted in the book. Although the publisher states that the book is for older elementary students, like Almost Astronauts, I think it's suitable and fascinating for older kids and even adults; there are several pages of notes and bibliography at the end to inspire further research.

Far-Out Guide to the Solar System

Note: There are 12 individual titles in this series, Far-Out Guides to the Sun, Mercury, Venus, Earth, the Moon, Mars, Jupiter, Saturn, Uranus, Neptune, Asteroids and Comets, and Icy Dwarf Planets.

It is cool to have distinct titles for older elementary kids on each planet in the solar system as well as the Sun, Moon, asteroids, and icy dwarf planets. That being said, it seems prohibitively expensive for anybody but a library to buy all 12 titles (which will run you $270 even at the publisher's discounted price). Even the publisher must think this is expensive because they wouldn't send me all 12 for review, so I requested the books for Uranus, Mercury, and icy dwarf planets, figuring that those would contain information that is harder to find in more general titles for kids.

Although I grumble about the price, these books are absolutely packed with facts and will arm a trivia-happy kid with material for days of "Did you know that...?" conversation. There are lots of photos, as well as discovery timelines, glossaries, and indexes, so they will be great resources for student research.

The Mercury one is updated to include MESSENGER results, with lots of quality photos of the spacecraft and of Mercury in both true and false color, and includes some narrative about the excitement of the flybys, quoting principal investigator Sean Solomon repeatedly. It even discusses ESA's future Bepi-Colombo mission in detail.

The Uranus one covers the Voyager 2 encounter, quoting Ed Stone and Larry Soderblom talking about the drama, the planet, and the moons. Only half the book is Voyager-based; it follows with accounts of research from Hubble, with a detailed explanation of the 2007 equinox/ring plane crossing, quoting Mark Showalter. It describes Keck's adaptive optics systems.

The icy dwarf planets one is very up-to-date and provides thorough information on four dwarf planet systems: Haumea, Makemake, and Eris in addition to Pluto. There's a glaring error on the physical fact pages, where the diagrams mix up the identities of Pluto and Haumea's smaller moons (it puts Hi'iaka and Namaka with Pluto and Nix and Hydra with Haumea); the error is not repeated on a later text facts page, so at least the correct information is to be found in the book somewhere. The book quotes Mike Brown about the Eris discovery, explains the IAU decision on Pluto extremely well, and has several pages previewing New Horizons, quoting Alan Stern. I wish it did a better job explaining that Pluto, Haumea, Makemake, and Eris are far from the only icy dwarf planets out there; the focus of the book on those fascinating four makes it seem as though they're the end of the story. 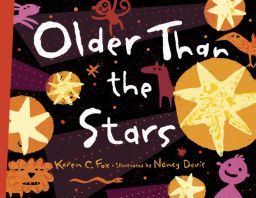 Older Than the Stars

(See my longer review of this book here.) This is a book about Big Bang cosmology, solar system formation, and human evolution for young children. It's hard to imagine that such a thing could succeed, but it does. The main text is a repetitive, singsongy, catchy rhyme in the spirit of the traditional "house that Jack built" poem. The rhyme is really fun to read aloud, and a reasonably factual account of the scientific "creation story" accompanied by quirky, brightly colored graphics, with text incorporated into the artwork traveling in topsy-turvy directions, so it's a success for my preschooler. 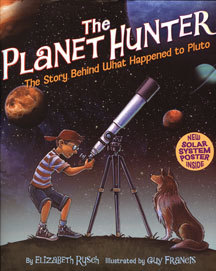 The Planet Hunter: The Story Behind What Happened to Pluto

This book seeks to inspire future scientists with the story of Mike Brown, opening with him making mud craters in his backyard as a kid, and continuing to tell his story of becoming an astronomer, searching for distant objects, and upending the solar system. It's a well-told narrative with lots of marginal "fun facts," and really engagingly animated illustrations. Yet I feel a strange awkwardness while reading it. I've thought about it for a while and I think the major reason for this awkward feeling is that the book describes Mike's work as though it was an utterly solitary endeavor; it mentions "fellow astronomers" and "people" asking him questions but names none of them, and in the illustrations include only one other person, a nameless, generic assistant-type woman in a white lab coat. I think this is a problem with the book but it's still a very engaging and, I hope, inspiring story. 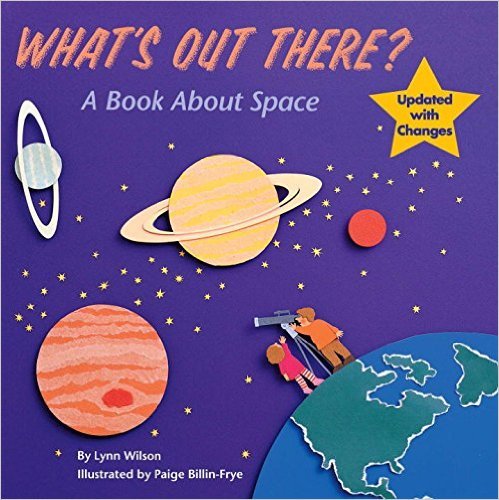 What's Out There?: A Book About Space

This is a good, if dry, introduction to the most important concepts in planetary science for young children; it discusses the planets, the differences among the terrestrial planets, the phases of the Moon, the origin of day and night and of the seasons, human exploration of the Moon, and a couple of other ideas, all in succinct, easy-to-understand text. It's been updated in 2007 with Pluto's new status. However, when they updated the 1993 edition of the book, they failed to update the two pages on Mars exploration, which say that Mars was explored in the 1970s and shows a Viking lander, which, while not technically wrong, ignores the last 15 years of the Renaissance of Mars exploration. Hopefully anyone reading this book to their kids can mention that, since Viking, we've sent a lot more spacecraft to Mars!

What's So Special About Planet Earth?

The main point of What's So Special About Planet Earth is that Earth is the only place suitable for human life; in the first half of the book, it makes this point with an imagined tour of the solar system. But this tour isn't nearly as fun or even as informative as the one in Postcards from Pluto, or even Dogs in Space. The illustrations and shaky handwritten text try to be "fun" but the text is as dry as in What's Out There?. The second half of the book explains what about Earth makes life possible, and explains how people could be better stewards of this special environment. To be honest, I think the book would be better without the solar system tour.

I still have a stack of grownup books to review -- stay tuned for that to come before the month is out!