Deep Impact at Hartley 2: Two weeks after the flyby

Today the Deep Impact/EPOXI science team held a press briefing that followed up on their very successful flyby of two weeks ago, a status report on what they can say so far about the science that's coming out of the encounter. There's still years worth of work to be done with this data set, and actually the spacecraft hasn't even stopped taking Hartley 2 data yet; according to the timeline, it is still snapping photos every half an hour and will continue to do so until the last day of November.

Before I launch into detail, here were the major points from the briefing:

Mike A'Hearn showed the first image from the High-Resolution Imager that has been revealed from the Hartley 2 encounter. Mike showed how the initially blurry images from that camera can be sharpened using "scene-dependent iterative deconvolution."

Deep Impact's High-Resolution Imager (HRI) has suffered from a blurring problem since launch, but the team has developed methods to "deconvolve" the blurred images to reveal more detail. This blink animation compares HRI views of the nucleus of comet Hartley 2 before and after deconvolution.

This is such a cool picture. I'm glad they released both the "before" and "after" versions, because while the "after" one is certainly a better picture, it may contain artifacts that result from the image processing, so it's nice to be able to compare individual features to the same spot in the "before" image to increase my confidence that they really exist in the data. Mike remarked that every single dot in the field of view is a chunk of ice, ranging in size from the size of a golf ball (a few centimeters) to the size of a basketball (a few tens of centimeters). Which sounds like an awfully dangerous environment to be flying a spacecraft into. But, Mike said, they are probably very porous. Jessica Sunshine elaborated on this, saying "we're not seeing hail particles or ice cubes; we're seeing fluffy aggregates of very small particles of ice, like a dandelion puff." I'll have a bit more to say about this image at the end of this post.

Most of the best images from today were animations that show how you can track individual particles from one image to the next. Here's one that just floored the science team, according to Pete Schultz.

Two images from Deep Impact's Medium Resolution Imager taken just seconds apart near the spacecraft's November 4, 2010 flyby of Hartley 2 blink back and forth, which reveals the three-dimensional depth of Hartley 2's jets and the cloud of particles that accompanies it.

I'm mesmerized by how the jets have a visible 3D structure to them, but what Pete was looking at was the motions of individual "snowballs" visible against the sky. Go ahead, look at the animation, and see if you can track individual particles. Some of those apparent motions are optical illusions (the human brain likes to draw lines between two points) but there are particles whose motion can be tracked consistently across multiple frames, tracing out a 3D motion field of snowballs in space, reminding Pete of a snow globe:

Several frames from Deep Impact's Medium Resolution Imager near closest approach to comet Hartley 2 on November 4, 2010 show numerous ice-rich particles that were ejected by the comet, several of which can be tracked from frame to frame. The particles themselves are moving relatively slowly (at less than a meter per second); most of the apparent motion results from the many-kilometer-per-second relative speed of the spacecraft. The particles appear to move in different directions and with different speeds because they are at different distances from the spacecraft.

This cloud of individually visible big snowbally particles were a complete surprise to the science team. They were not seen at Tempel 1 at all.

With all those snowballs flying around, was this actually a dangerous environment? Project manager Tim Larson said that one of the first things they looked at after close approach was spacecraft health, and that "we went past the comet, through the coma, with no discernible damage to the spacecraft" from any of the telemetry they received from Deep Impact's instruments or systems. So the next question is, were there any hits that resulted in no damage? Larson said that they examined whether they got hit by small particles by looking at torques that such hits may have exerted on the spacecraft. They performed a detailed examination of the spacecraft's attitude data, which was measured in two different ways (he didn't specify how), and that they corrected for any motions of the spacecraft that resulted from its autonomous navigation and even its switches of filters in the cameras and the tiny sweeping motion of the scanner in the infrared instrument. He said "we've identified nine events in the ten minutes around closest approach that could possibly have been dust hits." Making an assumption about where the particles hit -- assuming that they all hit at about a meter away from the spacecraft's center of mass -- they used the torques to determine the mass of the particles that may have struck the spacecraft to range from about 0.02 to about 0.2 milligrams. Snowflakes.

Jessica Sunshine presented the most detailed science story of the briefing, based on data from the High-Resolution Imager's infrared spectrometer. Seen in visible light, Hartley 2 is jetting from the two rough ends of the nucleus -- from the sunlit area on the right, and to a lesser extent, from the left side of the nucleus. But no jets arise from the smooth "waist." The story is similar when Hartley 2 is viewed at a wavelength at which carbon dioxide (CO2) emits light, and at other wavelengths where dust and ice particles are visible. However, the story is very different for water vapor, which seems to be emitted predominantly from the waist rather than the two ends. 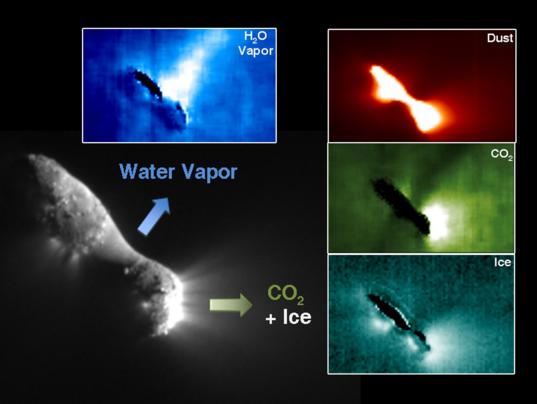 So the comet is behaving one way on its ends -- spewing out carbon dioxide jets that have particles of dust and ice entrained in them -- but is behaving differently at its middle, where there's a calmer outgassing of water vapor. What on Earth does this mean? A'Hearn proposed an explanation, and provided a couple of cartoons to illustrate it.

The behavior that they observed in the "waist" area of Hartley 2 is actually the comet behavior that they're familiar with, and saw at Tempel 1. Subsurface water ice, mixed with dirt, is heated by the Sun and sublimates (turns from a solid to a gas) gradually through the comet's pore spaces into the coma. 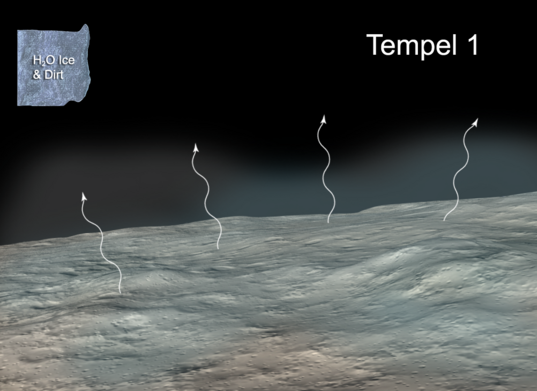 But the ends of Hartley 2 are behaving very differently from this, probably because it is (for reasons no one understands yet) much richer in carbon dioxide than other comets we've visited. Subsurface carbon dioxide ice located deep inside the comet feels the warmth from the Sun and sublimates, breaking out of the nucleus as jets carrying bits of solid water ice with them. The jets appear above discrete surface features. 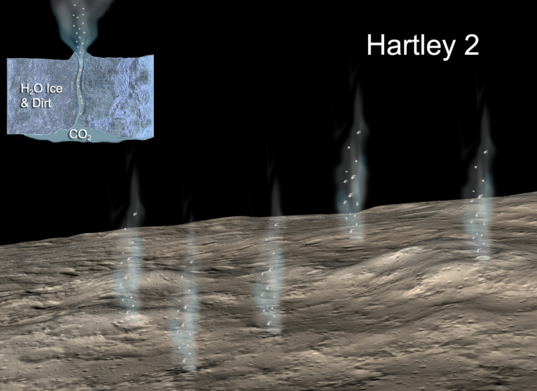 So, that's the story from the first two weeks of work following the encounter. I don't know what their plans are for future briefings. The Thanksgiving holiday is next week here in the U.S., and I strongly suspect that the scientists are ready for a break with family and friends. Once we come back from that, it's only two weeks until the American Geophysical Union meeting, but I see no Deep Impact/EPOXI related sessions in the scientific program. The next big meeting after that is, I think, the Lunar and Planetary Science Conference, which begins on March 7; the abstract deadline (that is, the date when scientists have to submit articles describing what they'll present at the meeting) is January 4. I suspect that's where we'll see the next big science results unless there's something that people just can't keep quiet about. They may also be working now on papers to submit to one of the major journals, like Science.

A couple of you might be disappointed that they didn't release more High-Resolution Imager views of the nucleus, and might be particularly frustrated by the fact that the one image they did release is cut off. Well, there's a reason for that, and it's not because they're withholding data. It's because, it looks like, the High-Resolution Imager got great views of those snowballs in space because it wasn't pointed dead-center at the comet during the couple of minutes surrounding the very closest approach. The team hasn't said anything about this publicly, but it's pretty clear when you look at those Medium-Resolution images that they released right after the encounter. Here's the deal: both the medium-resolution imager (MRI) and high-resolution imager (HRI) have 1024-pixel-square detectors, but they have different optics. MRI has a 10-milliradian field of view, while HRI has a 2-milliradian field of view. That means MRI can see an area five times wider than HRI, while HRI's pixels cover an area five times smaller than MRI's. 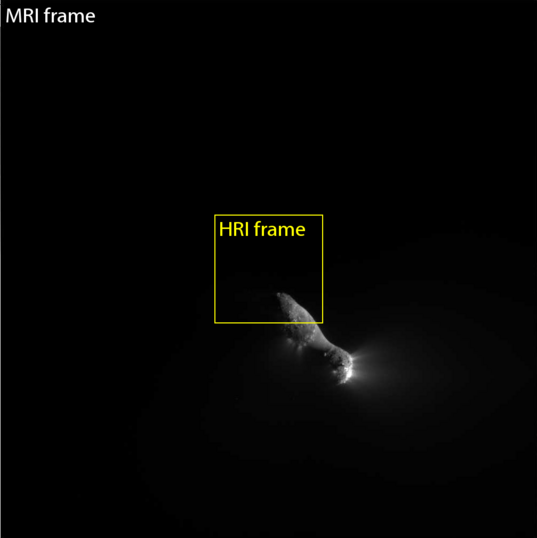 This cartoon was drawn by me and is not warranted for perfect accuracy; the square representing the HRI FOV should be shifted a few pixels away from perfect center but I wasn't sure which direction it was supposed to be offset, so I left it in the dead center.

So the HRI image that they released today may show pretty much everything that there is to see in the HRI data set, as least if you're looking for more detailed views of the nucleus than were achieved with the MRI. (I can't take credit for figuring this out myself; a little bird suggested I examine the closest-approach images with respect to the field of view of HRI, and I was like, "dang, why didn't I notice that before?") But if you throw the HRI field of view onto some of the images taken in the two or three minutes before closest approach, there should still some decently complete HRI views of the nucleus yet to come.

I haven't talked with anyone on the team about this, so I don't know whether it was intentional or not; I'll admit to a bit of personal disappointment that we won't get just a bit more detail on the Hartley 2 nucleus, but then I never expected the HRI images to tell us a whole lot more than the MRI images did, because of their blur. And those MRI images are pretty darned awesome.

About an hour after its closest approach of Hartley 2, Deep Impact downlinked five precious images taken during the nearest part of its flyby. The top two images were taken 82 and 16 seconds before closest approach, and the bottom three 18, 57, and 117 seconds after closest approach (image times are 13:58:07, 13:59:13, 13:59:47, 14:00:26, and 14:01:26 UTC on November 4). They show a very active comet with numerous jets. The comet's nucleus has two lobes. The lobe ends are noticeably lumpy. The lobes are connected by a thin waist that is much smoother. In the images taken after closest approach under more dramatic lighting, one can see comet jets that originate on the night side of the comet and rise into sunlight.