I can't wait for MAHLI to land on Mars

EDIT: Thanks to Ken Edgett for setting me straight on my interpretation of the sand.

JPL has just released some test images from the camera that has just been installed on the end of the Curiosity rover's robotic arm. MAHLI, the Mars Hand Lens Imager, is included on Curiosity for the same reason as Spirit and Opportunity's Microscopic Imagers -- to take closeup views of the rocks and soils that it encounters. But there's just no comparing Microscopic Imager and MAHLI images. MAHLI is going to achieve incredible detail in absolutely beautiful color.

Here's one sample image, a closeup on some sand. Each sand grain is revealed to be a rock, many of them containing even tinier grains. As a geologist, I am just drooling over this picture. You can see crystal shapes. With the wonderfully subtle color, a geologist can instantly tell what minerals are visible -- all those translucent ones are plagioclase feldspar. Ken Edgett explained the provenance of this sand to me: "The plag and the pumice grains (big white round grains) and some of the other crystalline grains are all sand-sized tephra from the terminal eruption of Mt. Mazama (now Crater Lake). The plag crystals are relatively angular because they haven't been transported far from where they fell out of the sky, and all that transport was by wind. The majority of rounded, dark gray and black grains are basalt lithic [rock] fragments eroded and originally transported fluvially [by a river] from local/surrounding bedrock. All of the sands in the picture are from the upper surface of a sand dune, so all have also undergone eolian [wind] transport." 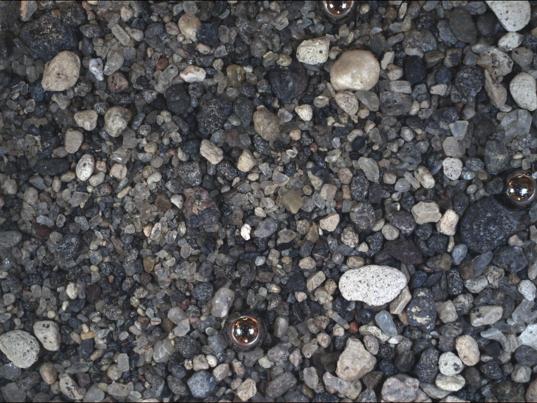 A closeup on some rounded sand grains captured by MAHLI, the Mars Hand Lens Imager, built for the Curiosity rover. Most of the sand grains, which were taken from a sand dune near Christmas Lake, Oregon, are under a millimeter in diameter. Within the field of view are three manufactured steel balls, each two millimeters in diameter. Reflected in the steel balls are the four white light-emitting diodes (LEDs) on MAHLI, which provide even illumination for the scene.

MAHLI's just one camera, but it's positioned on the end of a robotic arm, and one of the first things they are teaching (or will teach) the arm to do with it is to take stereo images, the old fashioned way: take one photo, shift position a little bit, take another photo. Here's a crossed-eye stereo pair on some cobbles of different rock. Looking at it in 3D, I can just feel how that rounded gray rhyolitic cobble would heft in my hand, filling it smoothly, ready to be tossed into a puddle with a ker-sploosh. That piece of vesicular lava on its left, on the other hand, would be sharp and rough and oddly lightweight. 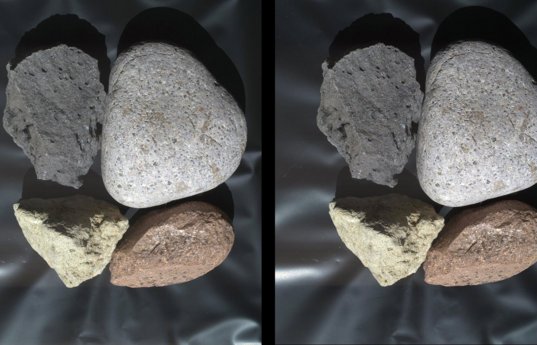 Crossed-eye stereo view of some rounded rocks from MAHLI

This is a test view of some Earth rocks captured by MAHLI, the Mars Hand Lens Imager for the Curiosity rover. The two images were taken by MAHLI sequentially, with a small shift of the arm between them, to create a stereo view. To achieve the stereo effect, bring the enlarged image up on your screen, then cross your eyes. The left and right images will overlap. Try to adjust your eyes' crossing until the two images overlap exactly, and then focus on the overlapped image. MAHLI is capable of focusing at different distances from the target, so can obtain wide views like this one (the gray cobble is about 11 centimeters long) and much tighter views zooming in on the grains.

Keep checking the CuriosityCam to see them working on Curiosity's "hand" full of science instruments (more officially known as the "turret") this week!