It's official: in a press release today, JAXA announced that some 1,500 dust grains scraped from the interior of Hayabusa's clean-looking sample return capsule are not of terrestrial origin so must be from Itokawa. Here is my interpretation of what the Google translation of the release means (so take the following with a grain of salt):

Particles were collected from within the sample catcher chamber by a specially shaped spatula. Using a SEM (scanning electron microscope) for observation and analysis, we identified 1,500 particles {of about one stony}??. In addition, the results of the analysis indicate that nearly all of extraterrestrial originated in an asteroid. Most of the particles collected smaller than 10 microns in diameter, which must be handled using special skills and technology. Now that the initial analysis is complete, JAXA is preparing the equipment to handle the samples properly to perform a more detailed analysis.

Here's one of the images accompanying the release, showing the edge of the special Teflon spatula they designed to scrape the interior of the sample return capsule: 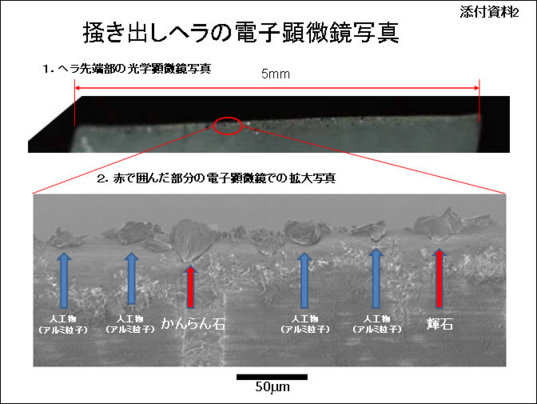 A special Teflon spatula was used to scrape the interior surfaces of Hayabusa's sample return capsule. This electron micrograph of the edge of the spatula reveals a few of the largest of the more than 1,500 grains identified as being of extraterrestrial origin, most of them smaller than 10 microns in diameter.

There's a couple of English-language stories from Japan and China on the Web but none of them contain any information beyond the release. Kelly Beatty has a story over at Sky & Telescope; he quotes Mike Zolensky, who's been working with JAXA on how to analyze such tiny grains.

I'm not going to lie to you: it's going to be difficult to analyze such tiny grains. But scientists around the world have experience in doing that, thanks in large part to the Stardust mission and NASA's generous policy of distributing Stardust samples to any researcher, NASA or not, who can demonstrate that they have a properly equipped lab and a good question to answer. The path has been prepared for us to learn what we can from the minuscule treasure that Hayabusa returned to us.

If this announcement holds up to scientific scrutiny -- and I don't see why it wouldn't -- this is the first time ever that samples have been retrieved from the surface of a body beyond the Moon. (Hayabusa has been preceded in the return of tiny grains collected from space by Genesis, which returned molecules collected from the solar wind although it crashed upon return, and Stardust, which collected particles from the tail of a comet and a few precious interstellar dust grains.) The next planned sample return mission is Phobos-Grunt, planned to launch about a year from now.