The Disturbance is Starting

Jupiter's faded belt may be coming back.

Jupiter's South Equatorial Belt -- one of the two broad red stripes that are usually visible across its disk in even small telescopes -- faded into a pale white earlier this year. As I wrote in June, it's not the first time that Jupiter has "lost" a belt; in fact, it's happened 14 times (I guess 15, now) since astronomers first noticed the phenomenon in the early 20th century.

Over a period of a year, one of Jupiter's two main dark belts -- the dark stripes most visible in amateur telescopes -- faded completely away. The South Equatorial Belt (SEB) is gone, leaving just the north belt (NEB) viewable in small telescopes.

In 1996, Agustin Sanchez-Lavega and J. M. Gomez published a paper on "The South Equatorial Belt of Jupiter, I: Its Life Cycle," in which they searched for patterns within the belt's disappearances and reappearances. They found that the global fade phase typically lasts 1 to 3 years or so, and is followed by a sudden instability lasting only days, which gives rise to a global disturbance lasting 1 to 6 months, then (maybe) it spreads to the tropical and equatorial regions for about a year, then it settles down into its ordinary belt-like appearance for anywhere from 1 to 14 years before beginning the cycle again.

So since the belt faded, astronomers have been watching Jupiter to see that first "instability" that will herald the onset of the global disturbance. And in the last few days they have spotted such a disturbance. It didn't look like much in visible wavelengths: 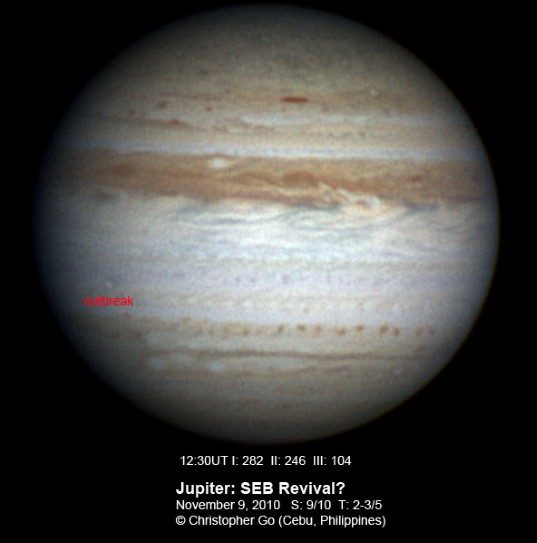 It's much more obvious in infrared wavelengths, a brilliant spot on the edge of that white belt. Note that Donald Parker's images (the two below) are in the traditional orientation, with south up, as they appear through the eyepiece of the telescope, while Go (whose photo is above) rotates his 180° to put north up. 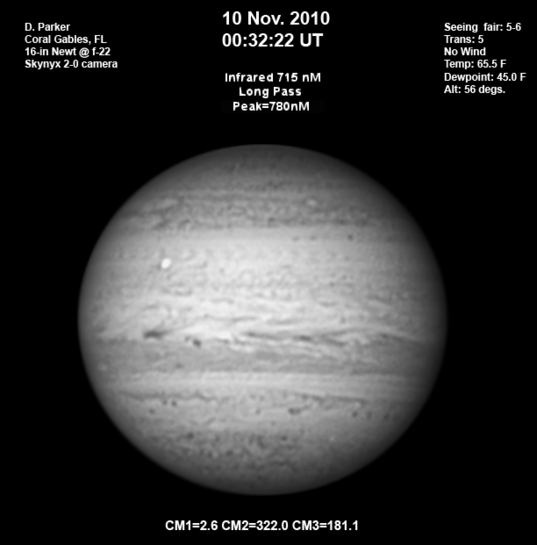 And from one night to the next it's gotten more obvious in visible wavelengths: 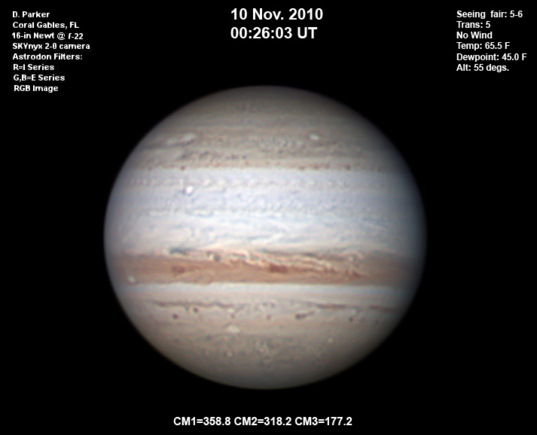 Now we'll get to see whether Sanchez-Lavega and Gomez' analysis of historical records actually has predictive power -- will this outbreak lead to a global disturbance or not? It's time to point big telescopes at Jupiter.

By the way, those astronomers who've been monitoring Jupiter over the past year to watch for the start of the disturbance? They're amateurs. They are the watchmen who have let the professional community know that now is the time to turn the big telescopes to Jupiter to see if they can catch that belt in the act of returning. Without amateurs, the professionals wouldn't know when to look. Professionals know this, and they've organized ways for amateurs to get them these valuable monitoring data. One such way is the Planetary Virtual Observatory and Laboratory -- that's where I got the images for this post. Go there, click the "Images" link on the top bar, and then "Jupiter Images" on the left bar, and you'll see all the latest amateur photos for yourself!