Two weeks later, I have finally found some time to return to my notes from the Division of Planetary Sciences annual meeting. At the end of the Tuesday morning session on Pluto (October 5), there was a bit of an orphan talk by Bill McKinnon on the origin of small impact craters on Triton. I guess people now consider Triton to be more at home among Pluto, Eris, and the other trans-Neptunian objects than it is among the moons of Saturn, which would have been the other place that the DPS organizers could have stuck the talk. Bill's talk mostly sought to debunk the conclusions of another paper.

A relatively new version of Voyager 2's highest-resolution mosaic on Triton put together by Paul Schenk shows lots of tiny little craters on Triton's cryovolcanic plains, most of them less than 20 kilometers in diameter. Paul, with coauthor Kevin Zahnle, published a paper in 2007 in which they proposed that the 100 or so impact craters visible in the mosaic are "sesquinaries," resulting from an impact onto or disruption of one of Neptune's other moons, an event that would have created a population of shrapnel in Neptune orbit that could have produced all (or, at least, most) of Triton's craters in one event. If this explanation were true, the craters could have formed as recently as yesterday (geologically speaking). The abstract of the Schenk and Zahnle paper is fairly easy to read, as such things go, so I'll repost it here: 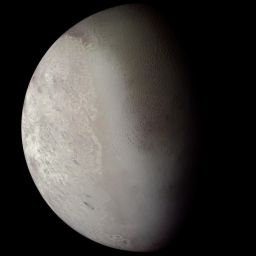 Voyager 2 acquired the images for this high-resolution mosaic of Triton on August 25, 1989. The south pole is at the right; several of Triton's famous south polar geysers are visible. Toward the equator at right, Triton is covered with a strange "cantaloupe terrain".

New mapping reveals 100 probable impact craters on Triton wider than 5 km diameter. All of the probable craters are within 90° of the apex of Triton's orbital motion (i.e., all are on the leading hemisphere) and have a cosine density distribution with respect to the apex. This spatial distribution is difficult to reconcile with a heliocentric (Sun-orbiting) source of impactors, be it ecliptic comets, the Kuiper Belt, the scattered disk, or tidally-disrupted temporary satellites in the style of Shoemaker