Six moons with one shot

There are six, count them, six moons in this photo. Plus the outer edge of Saturn's rings. Awesome. 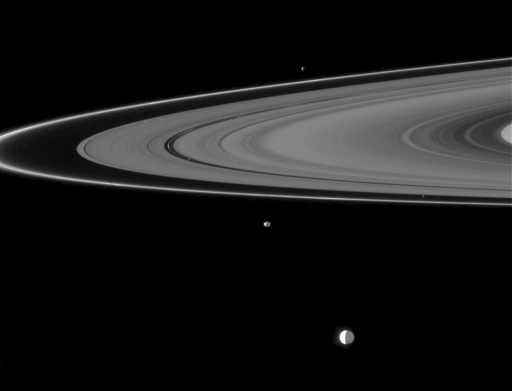 Six moons with one shot

On October 6, 2010, Cassini managed to catch six different moons passing through its narrow-angle camera field of view at once. At the time, Cassini was on the southern (shadowed) side of the rings, so the uppermost part of the rings are closest to Cassini, and rings and moons orbiting Saturn appear to be going in a clockwise direction. With the Sun behind and to the left of the rings as seen from Cassini, the skinny multiple braid of the F ring is the brightest of all the visible rings; its sparse, dusty material scatters light forward to Cassini like dust motes in a sunbeam. The largest moon visible, Enceladus, is the farthest away from Cassini. Both Enceladus and Janus, the oval-shaped moon above it, have night sides lit by light reflected from Saturn. To the right of both Enceladus and Janus, between the bright F ring and the main rings, is Atlas. Immediately above Janus, orbiting along with a pair of ringlets within the Encke gap, is Pan. (Pan appears to be accompanied by a clump in one ringlet.) Immediately above Pan is Daphnis, making a bright spot within the Keeler gap at the outermost edge of the main rings. Above the F ring near the upper right corner of the image is Epimetheus. Unlike Janus and Enceladus, Epimetheus is located between Cassini and Saturn, so its night side is not lit up by reflected Saturnshine.
This kind of coincidence of moons passing through Cassini's extremely narrow Narrow-Angle Camera field of view is a really, really unlikely event. But if you spend long enough at Saturn, it can happen. Cassini doesn't catch six moons at once by accident, though; someone on the imaging or planning teams had to figure out that this coincidence was going to happen, and that it would happen at a time that Cassini could take a photo, and then get the photograph into Cassini's long list of instructions; so well done and thanks to whoever it was on the Cassini team who was responsible for grabbing this incredible shot!

In fact, they took four shots at this opportunity, two each with different exposure settings. (Here's the originals: 1 - 2 - 3 - 4) Here's a little animation of the two longer-exposure shots, with the six moons called out.

Six moons with one shot (animation)

It was tough to figure out which moons were which, and in the end, I needed help. Usually I go to the PDS Rings Node Saturn viewer, put in the date of the image (October 6, 2010) and start at 12:00 and then just push forward and backward in time until I can get the view to match the photo, but I was sure that the big moon was Mimas and so I couldn't get it to work out right. So thanks to Luke Dones for helping me match the time (17:10 is pretty close) and name the moons in the Saturn Viewer. Disconcertingly, the Saturn Viewer does not name Daphnis as being in the view, but I think I have had that happen to me with Daphnis before; I don't think it's where the Saturn Viewer thinks it is.