I'm part of the conspiracy, apparently

Oh, bother. From the Bad Astronomer I learned that a Cassini pic of Titan and Dione that I processed is apparently evidence of a NASA coverup, at least according to some guy on Youtube. And then I found out that there are newspapers that use random guys on Youtube as a source for news stories. (Here it is in Australia, and in Belgium. And holy cow, it's now on the Fox News website.) This is a weird world.

Here's the image I made, which was a relatively quick and dirty color composite of three views of Titan and Dione captured by Cassini through red, green, and blue filters. If you download this image and open it in a paint program and increase the contrast, you'll see the brush strokes on the night side of Dione where I painted out some misalignment in the three component images that resulted from Dione's apparent motion across Titan in the time that separated the three frames. Which is apparently a NASA conspiracy. 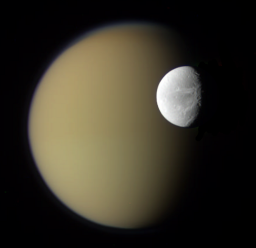 Dione passes in front of Titan in this Cassini color composite from April 10, 2010. Dione's icy surface is considerably more reflective than Titan's smoggy atmosphere.
To my surprise, there are sane commenters on Fark who not only pointed back to my original blog post on this, as well as the post in which I explained the image processing technique, but suggested that the reason it was a relatively sloppy Photoshop job is because it really wasn't meant as more than a "hey cool, look at this photo" kind of deal. (Thanks, "Spaced Cowboy.") As I explained in my comment on the original posting, Cassini takes color pictures by snapping three sequential photos through red, green, and blue filters. In the time that separated the three frames, Dione moved, so if I did a simple color composite I would be able to make Titan look right, but not Dione; or Dione look right, but not Titan. So I aligned Dione, cut it out, and then aligned Titan, and then had to account for the missing bits of shadow where the bits of Dione had been in two of the three channels. (Thankfully the Australian web story also made this part of the story clear.)

If any of you out there would like to take a crack at doing a more careful processing job on this photo than I did, the images were part of a long sequence of 21 images of Dione crossing Titan taken on April 10, 2010. You can go to the Cassini raw images website and enter "04/10/2010" and "04/11/2010" in the Start and End text boxes under Observation Time and click "Search Images" and you can download them. If you just want the three pics I used, I am pretty sure that the three original images I used were this (blue filter), this (green filter), and this (red filter).

However, I think that the time to really make an effort with this sequence is next April, because that's when the photos will be released to the Planetary Data System. The versions on the Cassini raw images website are in JPEG format and have been contrast-stretched in a way that wipes out some detail, especially on the sunlit part of Dione and on the night sides of both moons. I plan to revisit this sequence once the science data are formally released. Science data for Cassini are released quarterly, 9 to 12 months after they are acquired, so these images will become available at high quality on April 1, 2010 2011 (oops, initially wrote the wrong year, sorry). Here is an example of what a really good image processor can do with the high-quality data of a Titan-icy moon mutual event.