The first announcement I made today was the new partnership between the Planetary Society and UnmannedSpaceflight.com. The second is the launch of a new project that is near and dear to my heart: AmateurSpaceImages.com. It doesn't exist yet; we've registered the URL, but there's nothing there but a 1996-era index page with a couple of pictures. But I hope that in a few months, it will be much more: the online source for amateur-processed images from space missions. In order to do it, I need your help. And when I say "help," I mean "money." 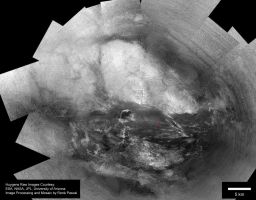 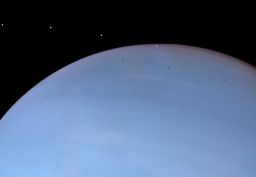 Despina, 148 kilometers across, is a tiny moon of Neptune located within its ring system and discovered by Voyager 2 in 1989 as the spacecraft approached for its flyby. This view of Despina eclipsing and transiting Neptune is composed of four frames captured nine minutes apart on August 24, 1989 from 20:00 to 20:27 through blue, orange, violet, and green filters. The images were originally captured to study the colors of Neptune's clouds; the fact that Despina and its shadow were visible in the images was discovered by amateur image processor Ted Stryk in 2009.
Ever since I started this blog I have been posting spectacular space images that were processed from original mission data not by scientists but by members of the public. Once missions are over, their data gets archived, and not a great many people get funded to look at it. There are huge collections of images that have never been seen by the public. But there are more and more people out there who are learning to access and process these data into incredible views of strange planets and moons. Many of these people have their own blogs or Flickr albums, and of course I feature some of this work, as do other sites. But that's not enough. These people are taking mission data and creating the best imaginable illustrations of alien worlds, but there's no single place you can go to find amateurs' most amazing views of Enceladus' plumes or Spirit's last stop. I have long wanted to create a website that serves as the Planetary Photojournal for amateur-processed images, and I have finally been granted permission by my bosses at the Planetary Society, in partnership with UnmannedSpaceflight.com (where many of these images are first posted), to raise funds for and create this site.

At AmateurSpaceImages.com we will post photos from both ongoing and ancient missions, from across the solar system. You'll be able to share the images via social networking sites, download them for use in your presentations and Web articles, and discuss them with each other. Just like UnmannedSpaceflight.com it'll be moderated to maintain a high standard, so that when you search on "Rhea" or "Lutetia" or "Mercury" you'll get images that can serve as illustrations, either print or online. And we will make sure that the credit for each image is clear -- both for the missions and science teams that originated the data, and for the amateurs who took that data and produced something amazing from it.

If you care about the stunning images returned from space missions, if you want to see more like them, if you have ever had a hard time finding that amazing amateur-processed mosaic of Huygens' landing site or that newly discovered view of Neptune's tiny moon Despina, please donate to support me in developing AmateurSpaceImages.com. Donate here!