I'm so proud 1: UnmannedSpaceflight.com now partnered with the Planetary Society

I have two big announcements to make today, one project I've been intimately involved in for years and one that has been a dream of mine for years and which I can finally take public. The first announcement I'll make below; the second will be in the next post.

The first announcement is that the online forum UnmannedSpaceflight.com is formally becoming part of the Planetary Society. Ever since a post on that forum first showed up as a result in some arcane Mars Exploration Rover-related Google search I did in the summer of 2005, I have known it as a place full of my people -- space enthusiasts who not only enjoy the adventures of robotic missions, but who seek to make the most of the archives of image data that they have returned to Earth. I've been one of the Administrators of the site since September 2005 -- which is right about when I started this blog!! -- and I've been delighted to watch it grow in members, not just "laypeople" but also space scientists and engineers too, as spacecraft have discovered new worlds and returned new images. Earlier this year UnmannedSpaceflight.com's founder Doug Ellison asked The Planetary Society if we could provide a permanent home for it. 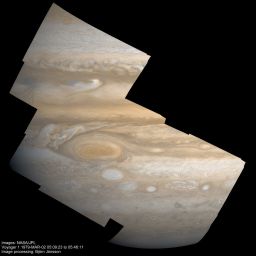 A large proportion of the great images that I post in this blog -- including this one -- appear first on UnmannedSpaceflight.com.

This is a 12 image mosaic (12 orange + 12 violet + 12 synthetic green images). The images were obtained on March 2, 1979 at a range of 4.3 million km. The first image (C1629045.IMQ) was obtained at 05:09:23 and the last one (C1629131.IMQ) at 05:46:11. The resolution is roughly 43 km/pixel. As UnmannedSpaceflight.com's new overlords, The Planetary Society will make sure the forum has continuous funding, and that donors to the site's administration will get the customary tax credit for their generosity. We will not, however, seek to change UnmannedSpaceflight.com or the way it is run. For most people, that is welcome news, but for a few, it will not be. For those of you who don't know what UnmannedSpaceflight.com or indeed an online forum is, let me explain.

A forum is a public meeting, or a place for such a meeting. Online, it's a website where people can have public discussions -- forums are the inheritors of the spirit of the good old BBS's of yore. Forums have "threads" or "topics" or discussions, and each thread may consist of many, many posts, by different people contributing and responding in each discussion. To see some current examples of this forum at its best, visit the thread where Eduardo Tesheiner posts his nearly daily updates on Opportunity's position on Mars, or the one where I and the other forum members are working on developing new HiRISE image base map updates for Eduardo's maps, or the one where we keep an eye on the awesome new images from Cassini. Explore UMSF through the list of all topics and you'll see we talk about MESSENGER to Voyager and everything in between.

Many forums are public, where you can create an identity and start posting away immediately. While UMSF is public, it is fairly strictly moderated. If you sign up, you have to wait to be approved (this is mostly to eliminate spam-bots in the signup process). But more importantly, to participate at UMSF, you have to stay to the rules of conduct, keeping to the subject of robotic missions, and the data they return, and not post about forbidden topics or engage in antisocial behavior like trolling or ranting. In practice, these rules can be a bit on the dictatorial side. But because they exist and are enforced by a 14-member, international moderation team, the quality of discussion on UMSF is almost uniformly high. As a direct result of our policies, UMSF attracts a large number of scientists and engineers to participate in forum discussions with what I like to call "the interested public" -- exactly the kind of interactions that The Planetary Society seeks to foster. The policies do mean that UMSF is not perfectly "public;" we do throw out participants from time to time, and others decide that the rules are too restrictive and take themselves away. But the administrative team at UMSF, which includes me and Doug and a dozen other people from all over the world, believe that our policies have resulted in the richest possible conversation about robotic exploration and how the public can interact with the data that they return to Earth.

As longtime readers know, I get quite a bit of my news and many of my greatest space images from UMSF. And I consider it to be home -- it's a place where I can interact with other people who are truly passionate about solar system exploration, and about the beautiful photos they return. So I'm thrilled that UnmannedSpaceflight.com and the Planetary Society are now formally affiliated, and I expect great things from our association.