What's up in the solar system in October 2010

Out in space, the most exciting things cooking this month are on Deep Impact, which is fast approaching comet Hartley 2 for a November 4 encounter, and at the Moon, which should soon see a second orbiter, China's Chang'E 2, which is set to launch Friday. There will be more action on Earth, with the 42nd Annual Meeting of the Division for Planetary Sciences of the American Astronomical Society (otherwise known as "DPS") in Pasadena, California next week, from October 3 to 8. It's a five-day meeting with three concurrent sessions on everything from Mercury to trans-Neptunian objects, and there should be a lot of planetary press releases. I'll be attending every day, and trying to turn myself into four people (three for the concurrent sessions and one to do the writeups) in order to cover it to the best of my ability!

I have a cool new illustration for these monthly updates, thanks to reader Olaf Frohn; it's a visual guide to the positions of all the active spacecraft traveling beyond Earth—and a list of the ones that are to launch in the future—including several solar and astrophysical missions that I don't write about. 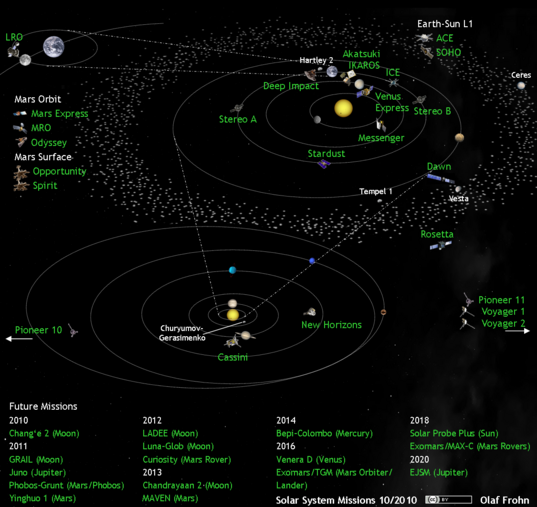 NASA's MESSENGER spacecraft is cruising along, with only 168 days remaining until Mercury orbit insertion (which is planned for March 18, 2011). Check their gallery for their latest image releases; there's a spectacular recent one of an oblique view of a long scarp. Also, the September issue of Icarus -- which is sitting here on my desk, not yet read, sadly! -- was a special report on science from MESSENGER's first two flybys.

ESA's Venus Express is quietly orbiting our sister planet, under an extended mission proposed to last through 2012. I posted some cool images and movies from Venus' south pole last week.

JAXA's Akatsuki en route to join Venus Express at the second planet. It is planned to arrive at Venus on December 7 -- in 68 days! There hasn't been much news out of the mission, but notes on its Twitter feed indicates the spacecraft has communicated daily with the ground station in Usuda, so it seems like all is well.

JAXA's IKAROS, too, is flying toward Venus, and according to this kawaii animation, it will pass Venus (without entering orbit) on December 18. I am not sure what, if anything, the spacecraft will be able to do to mark this event. IKAROS' Twitter feed has been extremely voluble in the last day, since the mission just won a "Web Creation Award." Humorously, the specific award that IKAROS won is rendered, in its Google translation, as the "Anxious people Web award," but a Twitter follower informs me that a more correct translation is "Remarkable people Web award."

New to my "what's up" roundup, China's Chang'E 2 lunar orbiter is set to launch on Friday! It is a duplicate of Chang'e 1 with improved camera and laser altimeter instruments and a lower planned orbit. It may possibly carry an impactor or hard lander of some kind. Here's as much as I know so far about the mission; I'll try to post something more later this week, especially if I find new pictures. Via Junya Terazono I've learned the launch time is to be 7:00 p.m. local time at Xichang, which I think is 11:00 UTC.

NASA's Lunar Reconnaissance Orbiter is busily mapping the Moon from its science orbit. I am so happy to be seeing more and more Wide-angle Camera images coming out of the mission, including some in color! The high-resolution images are amazing, but once it's complete, the WAC data set is what we'll be browsing on Google Moon for years to come, so it's wonderful to see it take shape. Don't forget to check the LOLA image of the week site too. Also, check out the entries in the International Observe the Moon Night photo contest here.

Out at Mars, it's late winter in the southern hemisphere, (it's currently Ls 156.2°), which means that the rovers' nights, though long, are getting shorter every sol. Today it is Mars Exploration Rover Spirit sol 2396 and Opportunity sol 2375. Spirit has still not been heard from since sol 2210 (March 22). Some people have been asking me whether we should be worried. I think the answer is that we should not be more worried now than we were last month. I keep hearing mid or end November as the time by when we should have heard from her, if she is going to wake up again. I wore my "Free Spirit" T-shirt to the Curiosity landing site selection meeting on Monday. Opportunity is, as usual, driving for two; she's already moved on past the meteorite named Oileán Ruaidh. She drove past a nearby meteorite, Ireland, but didn't even stop; she's got places to go. At this pace, it'll only be two more months until she drives off the highest-resolution base map that the rover fan community has created for her in Google Mars; I just posted a call for help on unmannedspaceflight.com, looking for someone who's interested in teaching himself how to register images in Google Mars to try to extend that base image coverage. Here is Eduardo Tesheiner's latest route map and Google Earth kml file for Opportunity.

ESA's Mars Express mission has been quiet lately. I was extremely pleased to see that Thomas Ormston and the VMC team at ESA's European Space Operations Centre won a "special mention" Public Engagement award at the Europlanet meeting last month, for the work they do with the "Mars Webcam." The Mars Webcam has not been given a lot of data volume recently but there have been a few postings with unusual high-phase (crescent) views of Mars covering the northern polar cap.

NASA's Mars Reconnaissance Orbiter went into safe mode on September 15 but was back to work on September 18; this was the first entry into safe mode in 10 months. The amount of data that it has returned from Mars is staggering; one of the tidbits I learned at Monday's Curiosity landing site selection meeting is that all four of the possible landing sites have not only been completely covered by HiRISE, CRISM, and CTX images -- but they have been completely covered by HiRISE and CTX in stereo. (That means they've been imaged twice, from different angles, permitting the construction of incredibly high-resolution digital terrain models.) The other newsworthy tidbit from this mission is that the CRISM team has started employing a trick called "PROTO" imaging, pioneered at Mars on Mars Global Surveyor: gimbaling the instrument three times faster than its original design, permitting them to increase the resolution of their data on the ground. (See the third-to-last paragraph of my verbose update from the meeting for more detail on that.) The latest MARCI weather report rising dust storm activity, as is typical for this time of year. Note that "this time of year" is exactly one Mars year before Curiosity lands, so people are particularly interested in the weather just now. As always, check in on the latest captioned image releases from HiRISE for your dose of spectacular photos from Mars. Here's a cool fresh impact site.

NASA's Mars Odyssey remains the longest-lived spacecraft in orbit at Mars. You can see the latest from its THEMIS instrument here. I just loved this recent one of a transparent bank of clouds drifting across a near-polar dune field.

The NASA-ESA-ASI Cassini mission will reach apoapsis on October 4 to begin Rev 139, a low-inclination orbit with about a 24-day period; the similar Rev 140 starts on October 28. Since we're so close to apoapsis, there's not a Looking Ahead article to cover much of October, but you can check out the article for Rev 138, which promises non-targeted encounters with Titan, Mimas, Dione, and Rhea in Rev 139; my Cassini tour page indicates these fall on the 14th, 16th, and 17th of the month, respectively. It also explains how Cassini is quiet for a few days, from September 27 to October 3, while it is in solar conjunction and restricted in its ability to communicate with Earth. I've learned recently that my Cassini tour page and my Google calendar for Cassini are based on outdated positional information for the orbiter, so encounter times are off by a few minutes and distances by a few percent; I will update those tables when I have the time! For now they are close enough to the truth.

NASA's Deep Impact's Encouter Phase with Comet 103P/Hartley 2 is now under way! The mission has been posting images weekly as they begin to approach the comet. The most recent one, posted yesterday, is from a range of 42 million kilometers. Closest approach will be at a distance of only 700 kilometers, a few minutes before 14:00 UTC on November 4. Observations will continue through November 25, which will mark the end of scientific observations for the Deep Impact extended mission. After returning all data from the comet encounter, Deep Impact will be decommissioned. Earth-based photos are still better than those from the spacecraft; visit the University of Maryland's Amateur Observers' Program Hartley 2 gallery.

All systems on NASA's Stardust are "nominal" as only 138 days remain until its flyby of comet Tempel 1. Stardust passed through perihelion last month; the mission reports that "Thermal engineering celebrated passing the milestone, and looks forward to cooler temperatures." Closest approach will happen at 8:42 p.m. PST on February 14, 2011, or 04:42 February 15 UTC.

NASA's Dawn has now been in space for three years. It continues patiently propelling itself toward a rendezvous with Vesta in July 2011, only 290 days away. I just posted Marc Rayman's latest Dawn Journal, in which he describes the "high altitude mapping orbit" phase of the Vesta segment of the mission.

NASA's New Horizons has 14.10 AU to go to reach Pluto. It's still on course for a January to July 2015 encounter with the Pluto and Charon system. There are 1665 days left until Pluto closest approach.

ESA's Rosetta mission is preparing to hibernate from July 2011 to January 2014. The next object it'll encounter will be its goal, comet 67/P Churyumov-Gerasimenko; rendezvous is set for May 2014.

Finally, NASA's Voyager 1 and 2 spacecraft are still going strong. I'm enjoying following the relatively active Twitter feed of Voyager 2, which also mentions the position of Voyager 1 once a day.Some other milestones to take note of this month, taken from JPL's Space Calendar: