Last week I posted a stack of Voyager Mission Status Bulletins, which were once the main resource for space enthusiasts to follow the dramatic events and photos of an in-flight space mission. (There was also a phone number that people could dial at JPL to hear a recorded mission status update, but it was a long-distance call back when long-distance calls were a big deal and not cheap.) The first stack of 42 bulletins, which were all scanned by reader Tom Faber, covered the mission from before launch, through the cruise to Jupiter, and Voyager 1's encounter with the King of Planets. I'm now posting another stack, covering Voyager 2's Jupiter encounter and both spacecraft's flybys of Saturn, which takes us through October of 1981. I'm very happy to say that a reader (Phil Stooke) stepped forward with a scan of Bulletin #43, which Tom did not have. So, Tom, here's your reward for scanning 99 newsletters: a copy of the one that was missing from your collection! Everyone else can download updates numbered 43 through 67 on the Voyager Mission Bulletins page.

Clearly, the rings were the stars of the show for the Saturn encounters. There's a funny comment embedded the discussion of Saturn satellite science results in Update #61, published January 14, 1981, between the two Saturn flybys: "As Titan loomed larger and larger on November 10 and 11, it still looked like a fuzzy yellow tennis ball, and spectators thought at last they were going to find some boring satellites. Not so. Saturn's satellites present a new class of icy, intermediate-sized objects unlike any planetary moons thus far explored..." I can almost feel the chagrin of Saturn rings scientists echoing through time as they wanted to be able to argue for less Voyager data from moons and more from rings. In the event, though, the rings scientists seem to have held the day. Update #62 -- dated June 26, 1981, what a long wait for the Voyager fans! -- says, under the heading "Changes in Science Emphasis," that "Because of Voyager 1's amazing findings last fall, Voyager 2's emphasis will be on the rings." Of course Voyager 2's scan platform stuck shortly after closest approach, resulting in the loss of some planned observations, but since there were still plenty of spectacular photos from the flyby, the bulletins did not spend nearly as much text on this serious problem or its solution as they would have devoted during the Earth to Jupiter cruise phase, when there were no science results to discuss.

This adorable cartoon, having a bit of fun with Voyager 2's poor scan platform, was at the end of Update #67, dated October 12, 1981. The next newsletter would not be published for three and a half years, on April 10, 1985. That's where I'll pick up the story in the next batch! 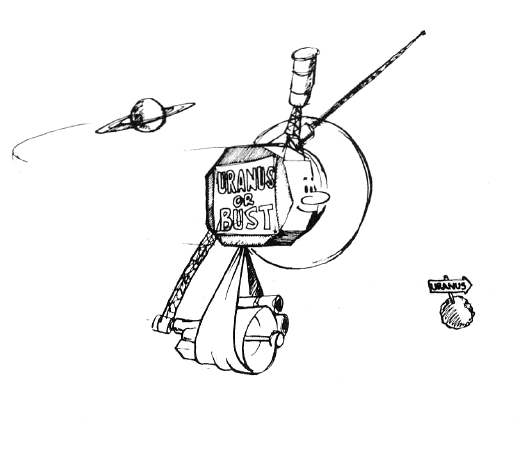 Cartoon published in the October 12, 1981 Voyager Mission Status Report (#67). A reader, Richard Carter, informed me that the cartoon was also printed in an old issue of The Planetary Report and credited to Philip Gwimm. I want this on a T-shirt.

P.S. Do you have a collection of mission information that is not available online, a scanner, and the interest in putting in your own time to scan? Another reader has promised to send me scanned versions of the Viking mission status bulletins, of the same vintage as the Voyager ones; I won't say no to other collections that are unavailable elsewhere so long as I don't have to do the tedious scanning! (Thanks again, Tom.)