I've been itching to get back to the Jet Propulsion Laboratory to get a good look at Curiosity, the next Mars rover. (I was not excited about the name when it was first bestowed upon the rover, but, like Spirit and Opportunity, it's growing on me, and I MUCH prefer such a name to "MSL" for communicating with the public.) JPL had an event to invite the media to view the rover last Thursday, so Bill Nye, A. J. S. Rayl, and I headed up there to see how she's coming along. Here's a pic of me with the rover; JPL Tweeted a photo of Bill earlier. 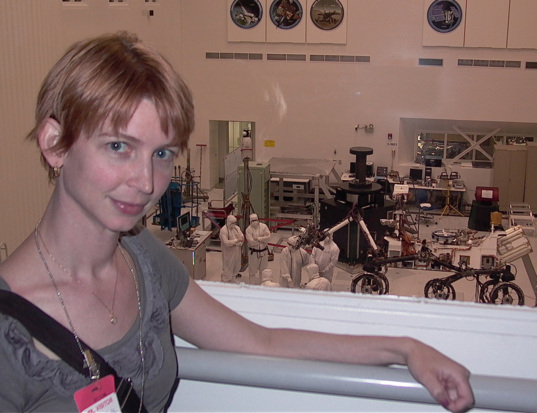 When we saw her, she was pretty well assembled, from her enormous wheels to her arm and mast. They had her strapped onto a tilt table, and were apparently "teaching" her how to use her robotic arm from such a position; specifically, they were working on getting the rover to apply the right amount of "preload" pressure with the drilling tool on the end of the arm, preparing her for acquiring rock samples from such a tilted position.

While we watched, they raised the arm. I'd be nervous about having my head underneath such a collection of deadly-looking instruments!

Here's a video from JPL that explains in a bit more detail -- with some cool images of the arm moving -- why they had the rover on that table.

Off in a corner of the room, one engineer worked at a station that I was told was actually giving instructions to the rover. Through the window in front of him you can see another engineer; there are people outside with a fully functional mockup of a DSN station receiving Curiosity's telemetry and running it through the same ground systems that they would if it had arrived at Canberra, Goldstone, or Madrid. Behind that engineer is the descent stage -- the part of the spacecraft that will lower Curiosity to the Martian surface -- and, in the far corner, the cruise stage, which will help propel Curiosity to Mars and keep it powered during the trip. It will have solar panels mounted on it; they're off now for some reason. You can see the system on the cruise stage that will radiate away the heat generated by Curiosity's RTG during the cruise to Mars.

Here's another cool recent video showing them testing the rocker-bogie suspension system. Curiosity will be able to handle substantially larger obstacles than Spirit and Opportunity. In practice, they do not like driving the rover's wheels over rocks larger than half a wheel diameter in size. Sean Haggart, the mobility engineer doing the narration, mentioned in the video that Curiosity's top speed is 4 centimeters per second, which is actually slower than what I've heard quoted for Spirit and Opportunity's top speed (5 cm/sec).

The rover may look well assembled and not far from being ready for launch -- but they're actually taking the whole thing apart again to do more testing! There's still a lot of work to be done before they can ship her to the Cape to be bundled into her rocket for launch next November. I chatted with project scientist John Grotzinger for a while about how things are going. I asked how they were on their instrument deliveries, and he said they were still waiting for three: ChemCam, CheMin, and SAM. One instrument he didn't mention was the camera systems, which were delivered a long time ago; but Malin Space Science Systems, which developed all the cameras, is now madly racing to produce a different version of MSL's MastCam that will restore the originally intended zoom capability, something that was tragically descoped from the mission back in 2007. There's no certainty that MSSS will be able to finish these on time, though everybody's hoping. Even if they don't, however, the MastCam that is currently attached to Curiosity produces fabulous images, as you can see in these photos and video from Malin's website. It even captures video. Here's some test video from MastCam. It may not look like much, but we've never had video from Mars. One thing's for sure -- if there are joggers on Mars, MSL will see them!

John was looking forward to the next community landing site selection meeting, which will happen on September 25-27, parts of which I will be attending and blogging (yay). He wouldn't rise to my bait and give any indication of what, among the four sites currently under consideration, his favored landing site was, instead mentioning advantages to all four and then pointing out that, ultimately, NASA Headquarters will decide where the rover will be sent.

After we were done gawking at Curiosity, Bill and I walked over to the JPL visitors' center with Doug Ellison and Dave Doody to take a look at another spacecraft, or at least part of one: Hubble's Wide Field and Planetary Camera 2 (WFPC2), which was, for 15 years, Hubble's workhorse visible-wavelength camera instrument. It was removed by astronauts and replaced with WFC3 in May 2009, and is now touring around the country before taking up permanent residence at the Smithsonian Institution in Washington, DC. It is huge -- practically the size of a whole small spacecraft, yet it was just one of Hubble's instruments. 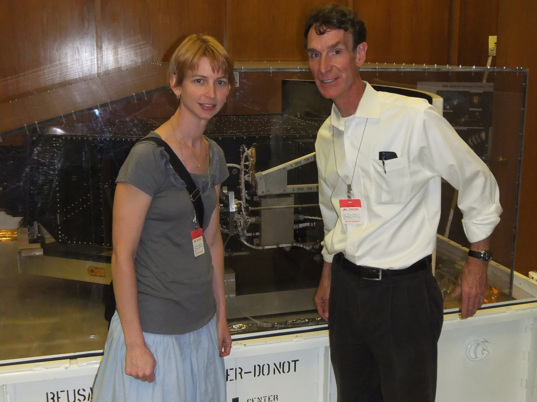 Emily and Bill with Hubble's WFPC2

Hubble's Wide Field and Planetary Camera 2 toured the country in 2010 before going to a permanent home at the Smithsonian Institution. Bill Nye and Emily Lakdawalla paid their respects to it on September 16, 2010.

I liked the triangular pair of bars on the outside that read "FOR EVA HANDLING ONLY" in the kind of text that says "NO STEP" on aircraft wings. Doug made sure that Bill and I checked out the exterior housing of the camera, which fitted into the cylindrical shell of the spacecraft. It was pitted with several dozen tiny holes, badges of duty from five years spent in space. Here's a closeup of the largest one, which was a beautiful impact crater in miniature, a hole not much bigger than a pinhead with a lovely raised rim. 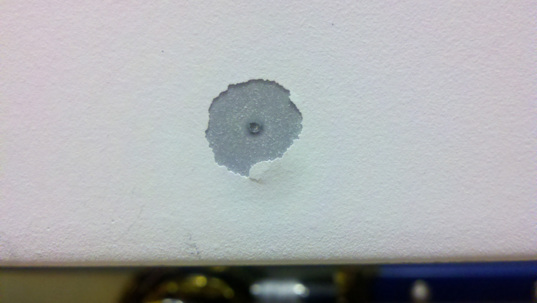 A closeup photo of the exterior housing on Hubble's Wide Field and Planetary Camera 2 (WFPC2), which spent more than five years in space, shows the largest of many micrometeorite impacts that pock its surface. The crater is about the size of the head of a pin, and has a raised rim.