I'm listening to a press briefing from several members of the Lunar Reconnaissance Orbiter science team, regarding three papers published today in Science:

The first paper is one of those kinds of articles that does not make for sexy headlines but which will no doubt be cited in many many future articles. It's a catalog, made from Laser Altimeter data, of all the largest craters on the Moon. Such catalogs have been made before, from Lunar Orbiter data, but not yet using this instrument, which measures topography of the Moon better than all previous instruments. The paper largely confirms previous results, so in that sense it's not sexy news, but I'd like to note here that it's not at all given that new spacecraft confirm results based on science from previous missions. This map is kind of a progress report, a first results paper; it's the groundwork for future more detailed studies on how craters are distributed and what that means about the Moon's bombardment history, and especially whether the theorized "Late Heavy Bombardment" actually happened or not. 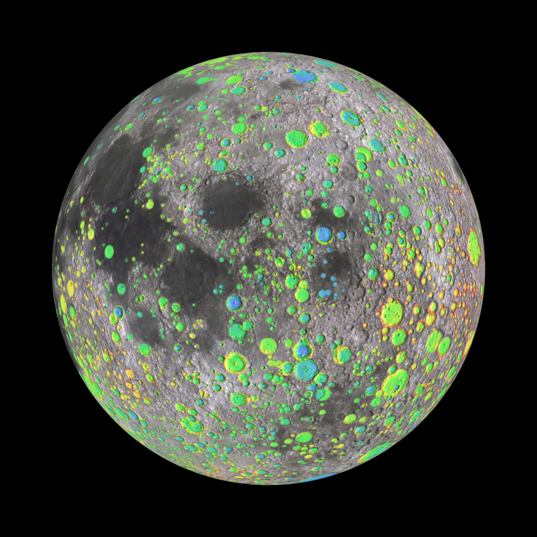 Catalog of large craters on the Moon

By the end of Lunar Reconnaissance Orbiter's first year at the Moon, the Lunar Orbiter Laser Altimeter (LOLA) team had mapped the entire moon and developed the first comprehensive catalog of large craters (colored on this map) from the LOLA data set. (The NASA website from which this image was taken did not explain the meaning of the different colors.)

The other two papers have to do with some anomalous compositions on the Moon. The first thing anybody is taught about lunar geology is that there are dark lunar maria, which are made of a black volcanic rock called basalt, and bright lunar highlands, which are mostly made of anorthosite, a rock that forms from a melt that is almost entirely made of the mineral plagioclase. With new instruments like Diviner that can map lunar compositions in really high resolution, scientists are now discovering small spots on the Moon that are made of materials that are not basalt or anorthosite. Most excitingly, they are finding places that are rich in silica. What silica means to a geologist is a rock that has been highly processed geologically; it hasn't just had one geologic event happen to it, a silica-rich rock has to have been partially melted or reworked more than once, maybe many times.

Here's a couple of the comments that Tim made today, paraphrased: The high-silica materials are fundamentally different from basaltic maria and anorthositic highlands. They have high SiO2. We see them in volcanoes and inside craters. He showed an image of Hansteen Alpha, which I reproduce below, and said that if it were on Earth we'd call it a rhyolitic volcano. It's like the dome formed on Mt. St. Helens after its eruption. He also showed an image of the crater Aristarchus, and pointed out orange and red colors associated with crater's central peak and ejecta blanket. This suggests to a geologist, he said, that the material was brought up by the impact. As for what the silicic materials mean, they have several ideas, but they note that they're mostly found within an area known to lunar mineralogists as the Procellarum KREEP terrain, which is an area unusually enriched in radiactive elements. "So what we think happened is that the basaltic magma intruded into the anorthositic crust. The heat diffused into the crust and started to melt it. The highly silicic component either reached the surface and erupted or separated and formed granitic bodies. In either case, we have new, really juicy targets for lunar exploration, and the Moon is a lot more complicated than we thought."

I won't go into much more detail on this because I actually wrote about one of these pieces of research a lot when it was presented at the Lunar and Planetary Science Conference in March. 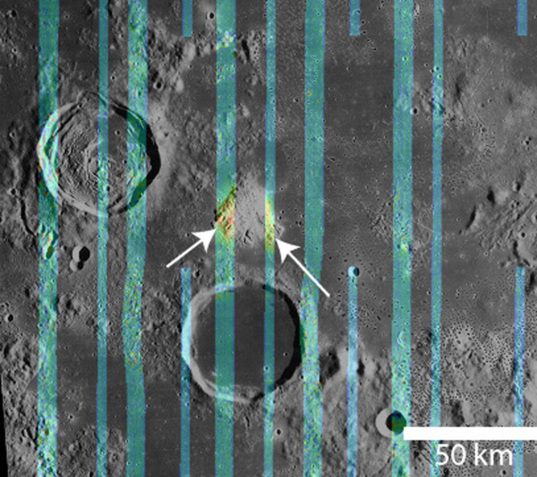 Diviner spots silica-rich terrain across Hansteen Alpha on the Moon

Lunar Reconnaissance Orbiter Diviner data are superimposed on Lunar Orbiter IV mosaic of a high feature on the Moon named Hansteen Alpha, which is believed to be a silicic volcano. Red and orange colors indicate highly silicic compositions.

Probably just as significant as these science results is an event that took place on Lunar Reconnaissance Orbiter today. The mission was actually developed to map out lunar terrain for possible human landing sites, and as such it was under the management of NASA's Exploration Systems Mission Directorate, or ESMD, the human exploration side of NASA. With its stationkeeping rocket burn this morning, Lunar Reconnaissance Orbiter was officially handed over from ESMD to the Science Mission Directorate or SMD, for a two-year science mission, in a transition that was planned long before the cancellation of the Constellation program. Rich Vondrak, Lunar Reconnaissance Orbiter's project scientist, said that there are five main science goals for the extended mission, the most important tow of which are to understand the Moon's bombardment history and to understand its detailed surface composition. As such, he said, these three publications give them a "running start" on their science mission.

The last press question today -- there weren't many -- was about the accessibility of the data to the public. Benjamin Greenhagen spoke up to point out that all the Diviner data, including what was presented today, are available from the Diviner website.

Finally, this wasn't part of the press briefing, but it was a nice new photo of Earth from the Moon released on the Lunar Reconnaissance Orbiter website today. 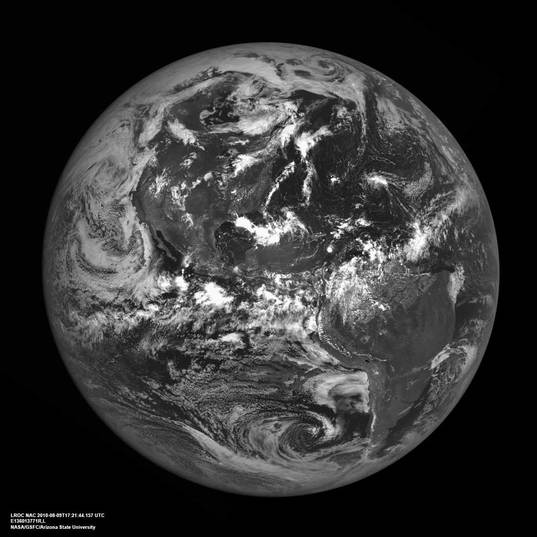 Earth from the Moon