I've got a treasure for you readers. We take for granted now the ability to get detailed mission updates in a timely fashion via the Web. Many space missions have websites with regular -- weekly or monthly or so -- science and engineering updates giving the status of spacecraft and their science missions, with information on both the good and the bad, the exciting and the mundane. (Check out, for example, the rovers, Cassini, Deep Impact, and IKAROS.) How did people get their mission status before the Web? Through printed newsletters, of course. And it's a sad fact that these documents are mostly not available online; in fact, I doubt they're available in many libraries.

So it's wonderful that there are space enthusiast pack rats out there who saved this stuff for decades. And it's even more wonderful that these pack rats have scanners and free time. One such space fan, Tom Faber, sent me an email out of the blue a few weeks ago saying, "I have a set of the Voyager Mission Status Bulletins that JPL published from 1977-1990. I have scanned these and made PDFs of them. I've looked for these on the net and haven't found them posted anywhere so I would like to make them available. Can you suggest who might put these on line?" Can I suggest anybody? How about me?!! 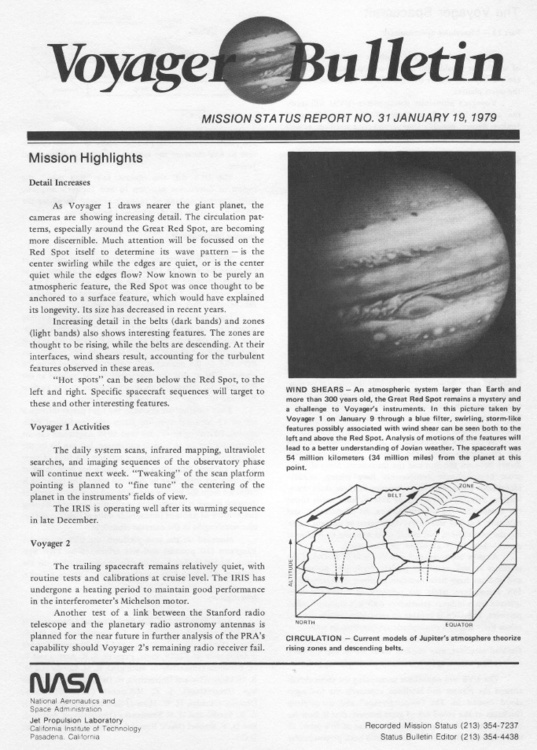 JPL published newsletters containing status updates on the Voyager missions from 1977 to 1990.

So here you go -- the Voyager Mission Status Bulletins. At least the first batch of them. I am not posting quite all of them because I want to look through the files first and index them; I've gotten through the first 42 (out of a total of 99), which takes the mission from before launch through Voyager 1's Jupiter encounter. And it forms a natural break, because there was a single mission status bulletin that Tom's collection is missing, number 43, which would have been from between May 11 and June 29, 1979, when Voyager 2 was approaching Jupiter. I don't know if anyone else out there reading this has also kept their Voyager bulletins for 30 years, but if you have, I need a scan or copy of #43!

It's amazing, reading these newsletters, how many problems the two Voyagers faced after their launch. Voyager 1 had a flight data system failure; its scan platform stuck; its filter wheels failed to rotate; the sensitivity of its plasma instrument fell; while Voyager 2's primary radio receiver failed, and a problem was found with its backup; its photopolarimeter's analyzer wheel stuck; its IRIS instrument's sensitivity fell. And there were several events where the spacecraft went into a safe mode because of computer faults. Some of these problems were fixed, while others (the biggest one being Voyager 2's radio receiver failure) were never rectified. Thank goodness for redundant design. There's both pride and worry coming through that first year's worth of mission updates. But once Voyager 1 started getting its first shots of Jupiter, the tone shifted to anticipation and then elation. It's funny, now, to read the previews of what the science team expected to see in the Jovian system. They were madly anticipating what they'd find at Io, and weren't disappointed, but they were shocked at their first distant views of Europa, clearly having no guess that the smallest of the Galilean moons would prove to be such a compelling place to visit.

These documents are a fascinating read, and I'm glad Tom sent them to me. I'll get the rest of them posted over the next couple of weeks. If anyone else reading this has some dusty carton of historical mission information that's unavailable online and is willing to give over a few evenings or weekends to scanning, send me an email!

Here's a couple of videos that make for fun viewing along with the Voyager 1 Jupiter encounter bulletins, courtesy of Ian Regan. First: a '70s-era animation of the Voyager 1 encounter with Jupiter:

Next: an animation put together from the Voyager 1 Jupiter approach images:

This Jupiter rotation movie was created using images taken by Voyager 1 as it approached the planet in 1979, over a period of approximately 15 hours. This equates to one and a half Jovian days.

Finally: Ian Regan's reprocessed version of that animation, a work in progress:

Ian Regan created this Jupiter rotation movie using images taken by Voyager 1 as it approached the planet in 1979, over a period of approximately 15 hours. Ian reprocessed the images and used VirtualDub / AVISynth frame stabilization filters for the animation. The original approach movie can be viewed here for comparison.

(P.S. Youtube seems to be having serious issues today. If those last two videos aren't loading for you, try again later.)