Book review: Older Than the Stars

Older Than the Stars is a book about Big Bang cosmology, solar system formation, and human evolution for young children. It's hard to imagine that such a thing could succeed, but it does. The main text is a repetitive, singsongy, catchy rhyme in the spirit of the traditional "house that Jack built" poem:

This is the blast intense enough
To hurl the atoms so strong and tough
That formed in the star of red-hot stuff
That burst from the gas in a giant puff
That spun from the blocks
That formed from the bits
That were born in the bang
Then the world began. 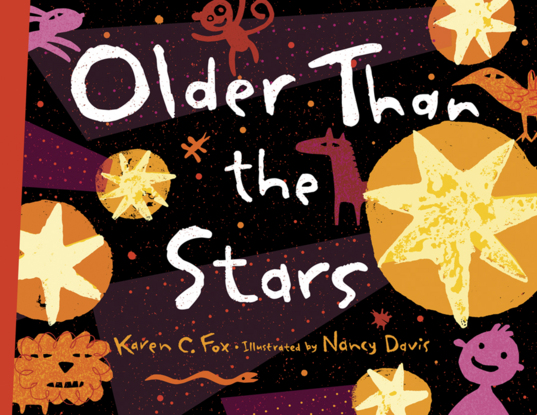 Older Than the Stars

The rhyme is really fun to read aloud, and a reasonably factual account of the scientific "creation story" accompanied by quirky, brightly colored graphics, with text incorporated into the artwork traveling in topsy-turvy directions, so it's a success for my preschooler. But wait, there's more. Each rhyming page contains a block of smaller text suitable for older children, explaining the same phenomenon described in that page's rhyme in much more detailed prose format. For example:

Each star shone brightly for billions of years. But stars don't live forever. Whenever a star died, it exploded in a giant fireball called a supernova. The searing heat of the supernova forced some of the star's atoms to melt together into new metals like iron, copper, and gold. The explosion sent all the atoms -- big and small -- hurtling through the universe in all directions.

In fact, I think this book is rather sneaky. Although those blocks of text are marketed as being for older children (and will certainly be read by older children), in fact I think they're really intended for a different audience: parents and teachers. I think there's a lot of otherwise well-educated parents out there who find themselves at a loss trying to explain to their children the scientific view of the origin of the universe, our world, and life. Worried about being wrong, they don't explain their children's origins to them at all. The blocks of text on each page will give parents a foundation in the scientific story for themselves, making them better prepared to answer their children's "why?" and "how?" questions.

Page spread from Older Than the Stars