Periodically, usually after I've posted some images pulled out of an image archive, a reader asks me: "What about all the non-image data? Are those public too?" The answer is yes; all of the different kinds of data from space missions are stored in public archives, waiting for people to access them. The reason I don't post other kinds of data is simple: I don't know how to access them, nor do I know how to interpret them. Images are easy. I can wrap my head around some non-image data, like the altimetric profiles from Mars Orbiter Laser Altimeter. But radio occultation data, or magnetometer readings, or energetic particle counts -- I've never worked with them, and am not sure, even if I learned how to handle the files, if I could interpret the data once I had it on my computer.

Well, the Cassini Saturn orbiter's RPWS team (which stands for Radio and Plasma Wave Spectrometer) has just solved half that problem for people who are curious about their particular non-image data set. Today via the Planetary Exploration Newsletter I learned of an easy-to-use Web browser that lets you access RPWS data from Cassini's approach to Saturn in January 2004 to August of 2010. Just visit the Public Kronos Data Browser, put in a date, select "Spectral Flux Density" or "Raw Power Spectral Density" or "Circular Polarization Degree" and it'll display a pretty graph for you. To make things even easier, the page opens with a default search, so you just need to fiddle with the existing settings to explore the data, which is always easier than facing a blank list of dialog boxes. Very cool, and extremely easy to use! 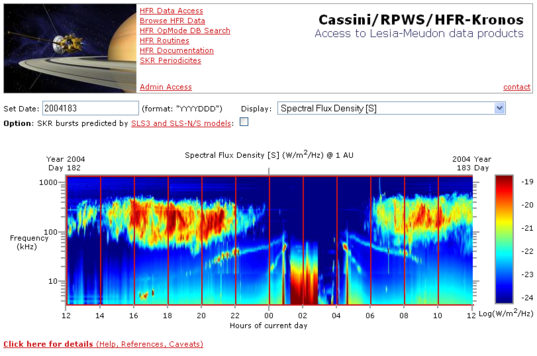 You can browse one of the Cassini Saturn orbiter's non-imaging data sets, from the Radio and Plasma Wave Science (RPWS) instrument, at this website. The screen capture here shows spectral flux density for the 24-hour period around Cassini's orbit insertion; Cassini fired its main engine from 01:12 to 02:48 UTC on July 1, 2004 (DOY 183) to enter orbit. This event definitely shows up in the data. The variations are partially due to Cassini's position with respect to Saturn and partially due (I think) to Cassini's changing three-axis orientation.

Of course accessing the data is only half the problem...and no, I don't have any idea what these data mean! But the graphs are pretty, and the site seems to be well documented, so if you are curious enough to take the time to read, you could learn something about how a non-imaging instrument works at Saturn, and you'll get the privilege of exploring more than six years' worth of data that few other people have seen. You'll also find that the RPWS team has a sense of humor. For example, on the link about "SKR Periodicities" they write, "The main auroral radio emission of Saturn, known as Saturn Kilometric Radiation (SKR), is modulated at a period thought to be related to the rotation of the planetary interior (whatever this means)." You can also learn more about RPWS -- and listen to sounds generated from its data -- on Principal Investigator Don Gurnett's website at the University of Iowa.

If I were going to take the time to dig in to these data, I would probably begin by trying to understand how the pretty graphs change with time. You get a plot of one 24-hour period at a time, divided into twelve 2-hour chunks. Click on any of these chunks to to recenter the plot on that time. I'd start by exploring how the plots change in appearance on short time scales, just slowly scrolling back and forth in time to see how their shape changes, and see if I can see the evidence of Saturn's slightly-less-than 11-hour rotation. Then I would begin to explore how Cassini's changing position within Saturn's plasma environment affects the data. I might open my Cassini Tour page and investigate whether I saw the same patterns on widely separated dates when Cassini was at periapsis (closest to Saturn) or apoapsis (farthest from Saturn). If there were similarities, I'd see if the similarities go away when Cassini's apoapsis is on a different side of the planet -- on the sunward side versus the night side. I'd also have fun putting in that first date, 2004001 (January 1, 2004), and marching forward to see how the instruments start picking up more and more signal as they approached the July 1, 2004 orbit insertion. If you need help converting dates from calendar format to date-of-year format and back, here's a converter. If you need help visualizing where Cassini is with respect to Saturn on any given date and time, use JPL's handy Solar System Simulator.

I think I will probably stick to imaging data sets, but I wanted to offer something to all of you who've been asking me "what about the non-imaging data?" all these years. Go explore it, and tell me if you find anything cool!