Two natural bridges on the Moon (now with 3D!)

Imagine this landscape: you're walking across an unusually smooth lunar surface, an impact melt sheet on the floor of a relatively recently formed crater. Suddenly, a pit opens before you, leading to a floor six meters below you. Crossing the pit is a thin, arching bridge of solid lunar rock. Taking a chance on an unusual walk, you venture out onto the platform, which is 7 meters wide and 20 meters long -- just a short walk across, but you feel nervous about doing your usual astronaut skip, knowing there is open space passing beneath the bridge under your feet. So instead you shuffle along, raising little puffs of dust, and breathe a sigh of relief as you finish your crossing.

That scenario is now known to be possible, as the Lunar Reconnaissance Orbiter Camera team has discovered a natural bridge within one of the "Constellation Regions of Interest" within King crater, on the lunar far side. 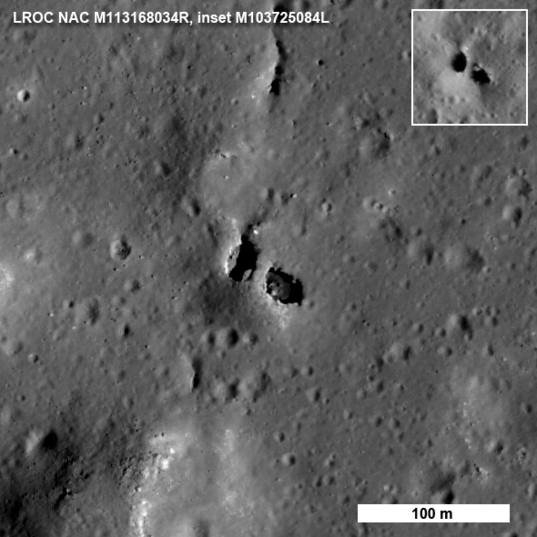 Natural bridge on the Moon

In a first, the Lunar Reconnaissance Orbiter camera team spotted a natural bridge on the Moon in an image from King crater, on the lunar farside. The bridge appears to have formed when two adjacent sections of roof collapsed into an underground void, leaving a small section of uncollapsed roof between them. Such collapses are commonly theorized to form into lunar lava tubes, but this region is not associated with lunar volcanism; instead, the collapse appears within the impact melt sheet of King, a very fresh, moderately sized (77-kilometer-diameter) crater.

The team is confident it's a bridge because of the shadow cast on the left (western) pit: you can see a crescent of sunlight that has shot completely through from the right (east) pit to the floor of the western one. The LROC team has actually imaged this thing six times already, within images M103725084L, M103732241L, M106088433L, M113168034R, M123785162L, and M123791947L, under various lighting conditions. (Note: the last two are not yet available but will be in the September 15 data release. Thanks to Mark Robinson for the corrections and links.) If you do explore those other images, realize that some of them will appear mirror-reversed (west for east) on your screen; here's why.

Here's a comparison of two of them:

Two views of the natural bridge within King crater on the Moon show the advantage of using a variety of solar illumination angles to view unusual topographic features. The left image shows the bridge when the Sun was 42° above the horizon, and the right is the same area taken at a time when the Sun was 80° above the horizon (near noon). M113168034R on the left, M123791947L on the right, both are 128 meters across, north is up.

Furthermore, the LROC team says, there is actually a second bridge nearby! (Their hint: "it's fairly close to the one shown above and about half its size.")

Here's a locator map showing you where on image M113168034R the bridge can be found. Thanks to Jonathan Aul and Tony DeBlasio for locating it for me! I'll leave it as an exercise to the reader to find the other bridge the LROC team mentioned (I found it, but don't want to spoil the puzzle for the rest of you). 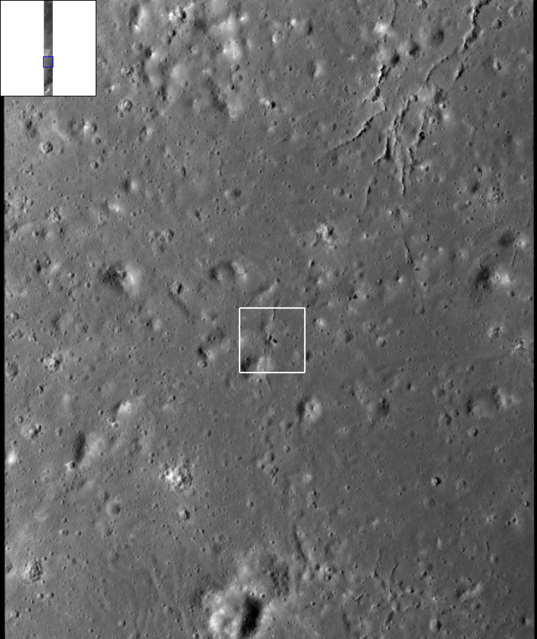 Locator map for image of natural bridge on the Moon

And, thanks to Nathanial Burton-Bradford, here's a red-blue anaglyph with which you can see the bridge and its pit. You'll need red-blue glasses (red on the left eye) to see the 3D effect. 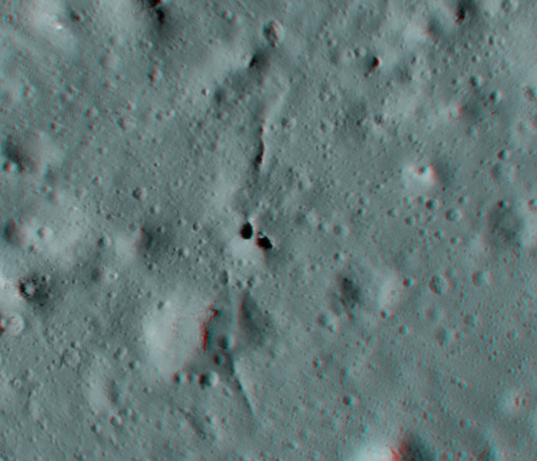 Two orbital views of a natural bridge spanning a collapse pit in King crater on the lunar farside have been combined into a 3D anaglyph. The bridge is about 7 meters wide and 20 long; the pit is about 12 meters deep on the left side and shallows to 6 meters on the right.