I've had a fun morning of noodling around learning how to write KML files, and have produced one for Google Mars that shows you all of the Mars Orbiter Laser Altimeter tracks that cross the area Opportunity has driven through already, as well as the area of Endeavour crater. For the 5% of you who have any idea what I'm talking about and any understanding of why I would want to do this, here's a link to the KML file and a screen grab from Google Mars showing it in action. For the rest of you, I'll explain below what I did and why it was a worthwhile use of my time! 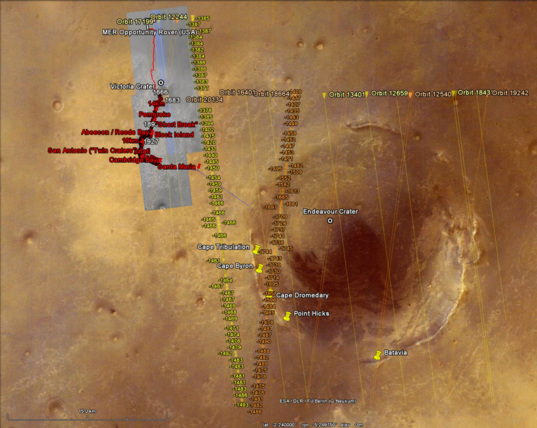 OK, so I have three things to explain. What are Mars Orbiter Laser Altimeter ground tracks? Why would I want them in Google Mars? How do you get them into Google Mars? Taking them one at a time:

Mars Orbiter Laser Altimeter -- MOLA, for short -- was one of the science instruments on Mars Global Surveyor, which orbited Mars for nine years, from 1997 to 2006. It's a pretty simple experiment to explain: it consisted of a laser that fired flashes of light at the surface and watched for the reflected flash. By timing the delay between the initial and reflected flashes and multiplying by the speed of light and dividing by two, the MOLA team calculated the range to the planet. That information, combined with precise tracking data, permitted the MOLA team to compute Mars' global topography to very high precision. The altitude measured at each shot point was precise to within 37 centimeters, and shot points were separated along the spacecraft's orbital path by about 300 meters. Here's the resulting MOLA map of Mars: 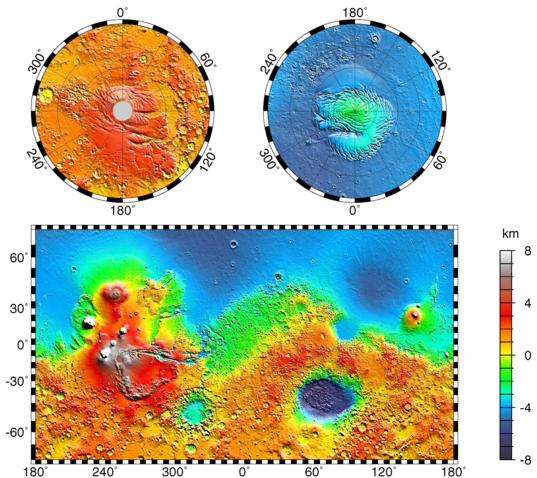 The Mars Orbiter Laser Altimeter aboard Mars Global Surveyor produced the first global map of the topography of Mars. MOLA operated by shining a laser at the planet and timing its reflection. The highly detailed along-orbit topographic profiles were resampled into this gridded map. The map is in Mercator projection to 70 degrees North and South, and Polar Stereographic projection for the south (left) and north (right) poles. The most obvious feature of this map is the major contrast in elevation between the southern highlands (mostly orange) and northern lowlands (blue). The highest elevations are found in the Tharsis volcanic province at about 250°E, while the lowest elevations are in the Hellas basin at about 60°E. A high-resolution version of the Mercator projected map can be downloaded here (18 MB, 3.5 km/pixel).

That map also demonstrates how most people interact with the MOLA data set. The MOLA team used the millions of individual shot points to calculate a gigantic digital terrain model, which is basically an image where the pixel values correspond to the elevations.

Why do I want to bring the MOLA ground tracks into Google Mars?

That global digital terrain model is really valuable for looking at the topography of vast landscapes, but when you really want to look at detailed topographic information for small-scale features -- like, say, the elevation changes encountered by the Mars Exploration Rover Opportunity during its kilometers-long traverse across Meridiani Planum -- this map is simply not good enough. You need to dig in to the original MOLA data, which consists of latitude, longitude, altitude triples. (Actually there's more information than that, but latitude, longitude, and altitude is the part of the data that I need.)

If I zoom in on Opportunity's path, you can see why this is important. This screen cap shows Opportunity's path as mapped by Eduardo Tesheiner in red. In orange and yellow are Mars Global Surveyor ground tracks; some tracks were on the ascending branch of the circular orbit and some were on the descending branch, which is why they cross. The ground tracks are labeled with the locations and altitudes of individual MOLA shot points. (The altitudes here are negative numbers; elevation is relative to Mars' mean, and the rovers were constrained to land at low-elevation locations to give them longer paths to decelerate through the atmosphere.) The shot points are mostly very evenly spaced along each track at 300 meters apart. But in the cross-track direction -- going from east to west -- the spacing is very uneven, and in some places the tracks are several kilometers apart. What you're looking at is MOLA's cross-track resolution at its worst. Mars Global Surveyor was a polar orbiter, so the ground tracks crossed near the poles. Near the equator (another constraint for the rovers was that they had to land near the equator, to maximize output of their solar panels), the tracks are spaced at their widest. 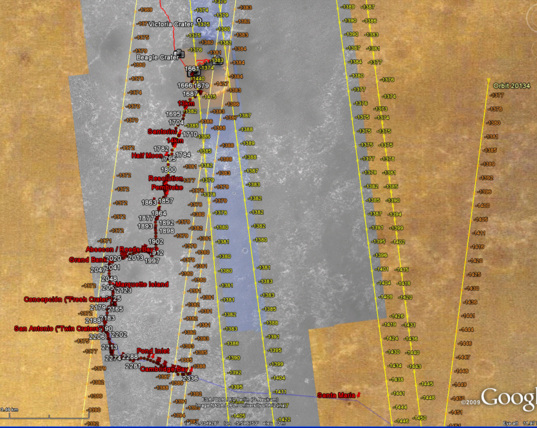 With the Google Mars map in hand, I can do a few fun things. First, I can figure out which MOLA ground tracks are a good representation of Opportunity's traverse (both past and future), and use them to see how the topography is going to change over time. But if you look at the Google Mars map, you'll see that Opportunity's path to date mostly lies in the no-man's land between MOLA ground tracks. Here's a plot of the most representative MOLA data available. It shows that Opportunity has spent nearly all of her mission within an altitude band spanning fewer than 20 meters of elevation, from a low of about -1388 meters (where she landed) to a high of somewhere around 1370 meters near Concepcion crater. Now that she's turned east toward Endeavour, she's going to be losing elevation rapidly; by the time she approaches the toe of Endeavour's western rim, she'll have lost almost 100 meters. The eastward turn also means that the topographic information gets much sparser, since she's traveling in the cross-track direction rather than in the along-track direction. 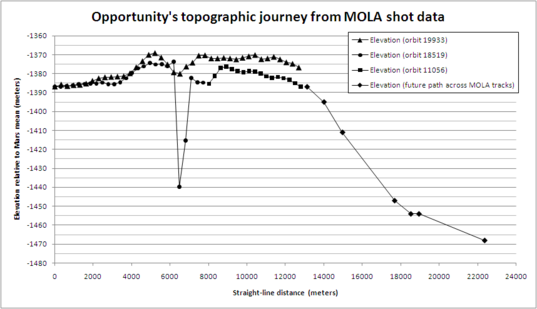 MOLA ground tracks are sparse near Opportunity's landing site. The elevation shown here is from two sets of paths that bracket Opportunity's journey from sol 1 to about sol 2300. One track (orbit 19933) passes to the west of Opportunity's path from Endurance crater to just past San Antonio ("Twin Craters"). It has slightly higher elevation overall than a path that passes to the east of Opportunity's traverse, composed partially of data from orbit 18519 and partially of data from orbit 11056. The orbit 18519 ground track clips the western edge of Victoria crater, producing a deep valley in the topographic profile. Orbit 11056 crosses Opportunity's path at about its sol 2327 position at a spot named Halifax. Now that Opportunity is traveling predominantly east, it will only rarely cross MOLA ground tracks, and the available topographic information gets much sparser.

Another reason I wanted to look at these data, besides seeing how Opportunity's altitude is varying, is to see the shape of Endeavour. Unfortunately, there are not very many ground tracks crossing the near rim, but one does seem to pass right over the point named Cape Dromedary, and another pair of tracks cross right over the high point on the southern edge of the rim named Batavia. Both of these tracks fail to hit any of the peaks on the north rim. 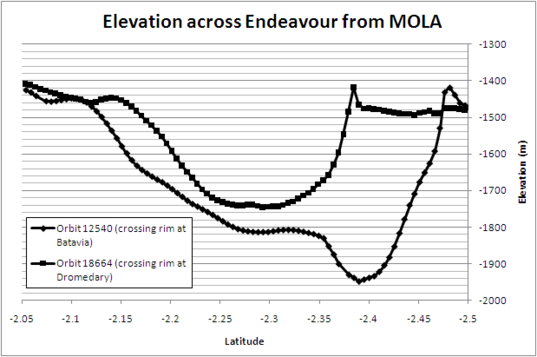 Elevation across Endeavour from MOLA

Two typical MOLA tracks crossing Endeavour crater show that it is a great big hole in the ground, dropping almost 500 meters from the surrounding plains. The rim is very subdued compared to the crater's depth, only rising about 60 meters above the plains.

How do you get MOLA data into Google Mars?

The first thing you have to do is to get the MOLA data. When I was in grad school and MOLA was active, this was a very tedious process. Now, though, it's very, very easy, thanks to the Geosciences Node of the Planetary Data System.

The query tool is pretty self-explanatory. Put in your min and max latitude and longitude values in the "Step 1" dialog box; you may need to add 360 to longitudes determined from Google Mars, which measures longitude from -180 to 180 rather than 0 to 360. Skip Step 2. Then click the "Query Count" button under step 3. It'll let you know how many MOLA shots are in the latitude and longitude box you checked. Once you've done that, you can download the data by using one of the "Generate Files" buttons. I used CSV format, which opens readily in Excel, and it worked fine except that the column headers were messed up -- but that's easy to fix manually. 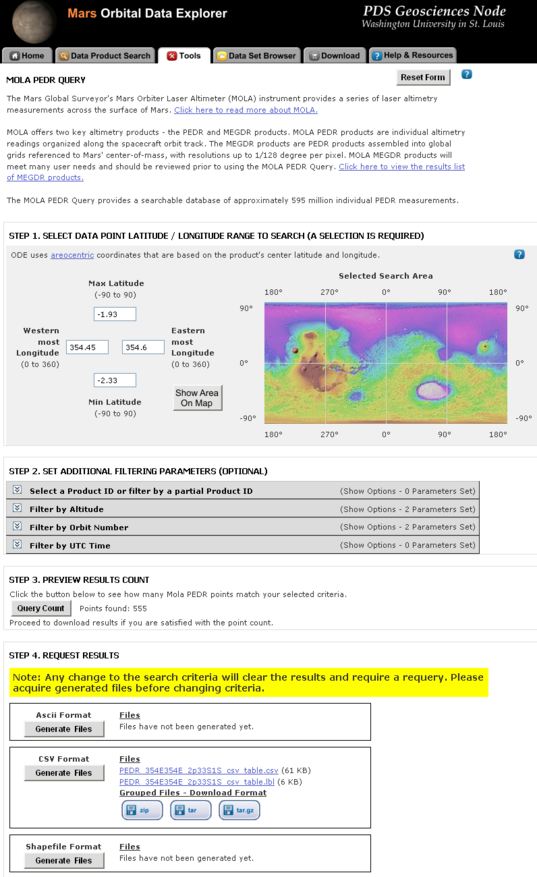 Once you have the data in Excel, there are tools for converting it to KML, the format employed by Google Maps to display geographic data. However, the KML format is super easy to understand, and there's an excellent online Reference, so I just took a KML file I already had (namely, Eduardo Tesheiner's latest Opportunity traverse map) and figured out how to use Excel CONCATENATE commands to generate the code I needed for the various point and line features. After a little trial and error, I had a map I was happy with. You can download the KML file here and open it within Google Mars if you'd like to play with it!

Nowadays, excellent stereo coverage by the Mars Reconnaissance Orbiter CTX and HiRISE cameras are resulting in much more detailed topographic information for landing sites on Mars than even MOLA afforded. But even with beautifully detailed digital terrain models derived from those high-res cameras, MOLA will remain important, because its accuracy across all of Mars allows scientists to tie the high-res digital terrain models derived from single images, which only produce relative elevation information (elevation change within the image), into regional elevation maps with precise absolute altitude information.