I got an advance copy of the first episode of "Bad Astronomer" Phil Plait's new series Bad Universe today, which will air for the first time on the Discovery Channel this coming Sunday at 10 p.m. ET and again at 1 a.m. (as always, check local listings for times). It's been delightful to watch Phil's progress from being a scientist to a blogger to a writer successful enough to quit his job and move wherever the heck he wanted to someone who has his own freaking TV show. Congratulations, Phil! Where are you going next? 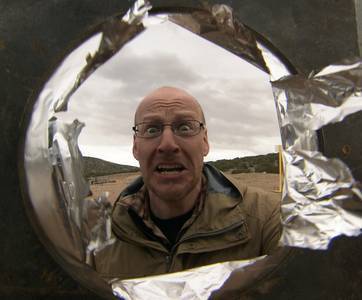 So I sat down with my husband this evening to watch the DVD. (I try to have the husband on hand when I watch TV shows I'll be reviewing, as someone who doesn't already know most of the facts or concepts being presented.) Titled "Asteroid Apocalypse," the episode is about the consequences of an asteroid impact, and looks at a few ways we could save ourselves from impending doom.

Bottom line: if the idea of watching Phil Plait and Dan Durda blow lots of different things up in the New Mexico desert sounds like a good time to you, you'll love the show, because there is no lack of explosions. I lost track of how many there were, but there were at least six explosion experiments, all replayed numerous times from various points of view and at various speeds. I'll admit that we got a little tired of all the explosions, and I proposed to my husband that we should have been passing the time with a drinking game (drink every time Phil says "Holy Haleakala" or shows Sydney's picturesque harbor being destroyed in a hypothetical impact. Seriously, Phil, what do you have against Sydney?)

But there were also some way cool moments. I think my favorite was the slow-mo replay of the very first explosion experiment, where he showed the visible effect of the expanding shock wave, a perfectly hemispherical distortion propagating outward in the air. For his part, my husband was surprised and educated about how we can apply what we learn in laboratory examination of meteorites to understand the composition of asteroids (Phil explained this effectively without ever using the word "spectroscopy" -- awesome job). I wish there had been fewer explosions and more observations -- maybe visits to or at least images of impact craters (bonus points if it wasn't Meteor Crater) or more information about just how many hazardous objects are out there or how fast we're discovering them. There wasn't a single photo of an actual asteroid that has been visited by a spacecraft. And it would have been nice to see a nod to the role amateur astronomers play in discovery, tracking, and followup of these asteroids. I did enjoy seeing JPL's Near Earth Object orbit simulator tool get some serious screen time. And Phil does a terrific job on camera; he comes across very naturally, with lots of enthusiasm.

Hopefully the bounteous explosions will draw in the enormous audience that is enjoyed by successful Discovery shows like Mythbusters, whose style has clearly influenced Bad Universe. Here's a preview -- for this explosion and many more, watch on Sunday! As for subsequent episodes, there's no airtime listed, and Sunday's episode is described on Discovery's as a "Sneak Peek." Stay tuned.

this has to be the most annoying science show ever presented. It seem like you are trying to squeeze three hours of TV in one hour. The presenter is hyper-active bordering on HDD. The camera work is often unwatchable and the content is quite often missed because of the speed of the mouth on the presenter and the unbelievably amatueurish camera work. Please,, this show could be great if all involved took some calming medicine and the man in front learned to keep still while talking.

Tell that guy to quit saying Holy Hollyockola so much.