MESSENGER: A snapshot of home

MESSENGER is in a unique position in the solar system, orbiting the Sun well within the orbit of Venus. From there, it can gaze outward from the Sun to search for tiny objects that may possibly be traveling in the same region, called vulcanoids. It's hard to search for vulcanoids from Earth, because looking for objects close to the Sun necessarily means pointing your telescopes close to the Sun; the tiny objects are lost in the glare and would never rise much above our horizon at night when our planet blocks out the Sun's light. But MESSENGER can look out into the night and potentially see these things, lit fully by the Sun behind the spacecraft. MESSENGER has been performing these searches for several months around each of its perihelion passes, when it is closest to the Sun, near Mercury's orbit.

Periodically, a previously known object -- or objects -- wanders through MESSENGER's field of view during these searches. On May 6, the objects that swept through its field of view included two very, very bright things: Earth and the Moon. 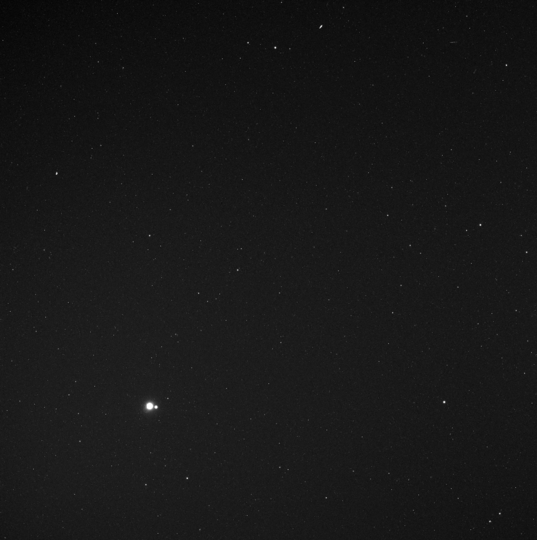 See those two bright dots? That's the double planet of Earth and the Moon. MESSENGER captured this view of its birthplace on May 6, 2010, during a search for vulcanoids, asteroids that are theorized to reside between Earth and the Sun. No vulcanoid has yet been discovered, but searches continue.

Today MESSENGER is at perihelion. It has two more solitary orbits of the Sun to go -- another lonely perihelion passage late this year, and then, the next time it gets close to the Sun, on March 18, 2011, it'll meet Mercury there.

I noticed that the just-released issue of Icarus is all about MESSENGER -- 23 peer-reviewed articles buttoning up the current state of Mercury science, employing the data from MESSENGER's three Mercury flybys. That set of publications will serve as the foundation for the science to come once MESSENGER finally arrives at Mercury in March.