It never ceases to amaze me how much science is being wrung out of the few grams of material that were returned to Earth by the Stardust mission. Stardust was the mission that flew through the coma of a comet, Wild 2, with a paddle containing sampling cells covered in aerogel. Comet particles that had been blown off of Wild 2 embedded themselves in the aerogel. After the encounter ended, the paddle was folded into a sample return capsule that came back to Earth. The mother ship is still active and is set for a flyby of comet Tempel 1 on February 14 of next year; but, as cool as a repeat visit to Tempel 1 will be, the real excitement on Stardust comes from the bits of primordial solar system material that are stuck in those many aerogel cells.

This photo shows the back of the sample paddle, the interstellar dust collector; I include it because the hands give you a sense of the scale of these aerogel cells. 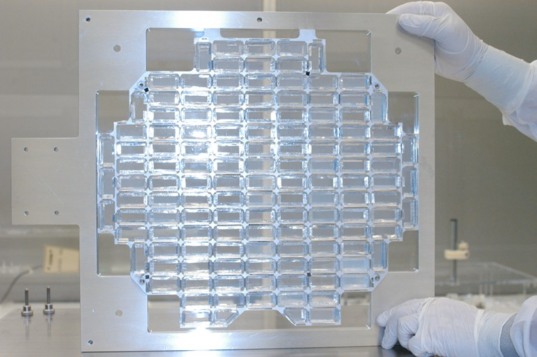 Stardust's Interstellar dust collector seen here after its move to the Stardust@home lab at JSC on April 21, 2006.

Since the capsule's return to Earth, most of those cells have been extracted and analyzed in minute detail. Inside them are tiny comet particles, with tracks left behind them by their high-speed impacts into the aerogel. Particles and their tracks are extracted as "picokeystones" and distributed to laboratories around the world for many different kinds of analysis by hundreds of scientists.

It's been fascinating to watch but hard to wrap one's head around -- hard not only for casual observers but, I think, for researchers too. So it's excellent news that Johnson Space Center (which is the main NASA center for the curation of stuff that has come to Earth from space) has just launched its Stardust Sample Catalog, an online database devoted to collecting information about all the Stardust samples and their analyses.

How to use the catalog? It depends on why you're checking it, of course. I clicked around some of the buttons, and the best "instant gratification" button to click is to go to the "Cometary Samples" or "Interstellar Samples" menu and select "Cometary [or Interstellar] Samples by Status (Tray View)." That gets you to a clickable map of the sample paddle, with every cell and inter-cell bit of foil labeled and color-coded according to its analysis status. 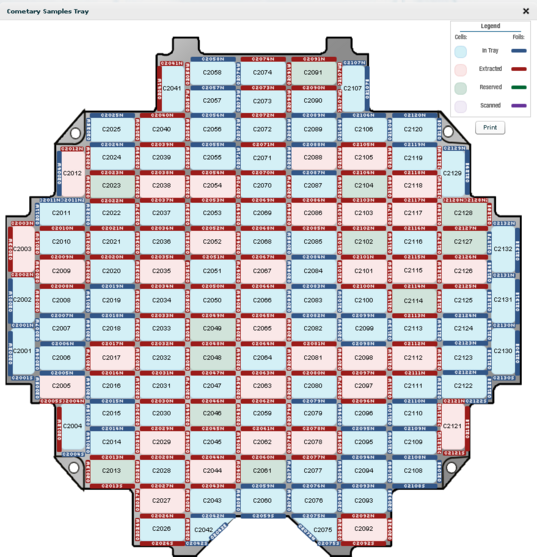 A snapshot of the status of Stardust sample analysis as of August 11, 2010, from the Stardust Sample Catalog.

Click on any one of the cells and you can get further information -- details and notes on extracted samples, and (probably most interesting for those of you reading this blog) photos of the whole cell with sample locations labeled as well as microscopic views of tracks and particles. 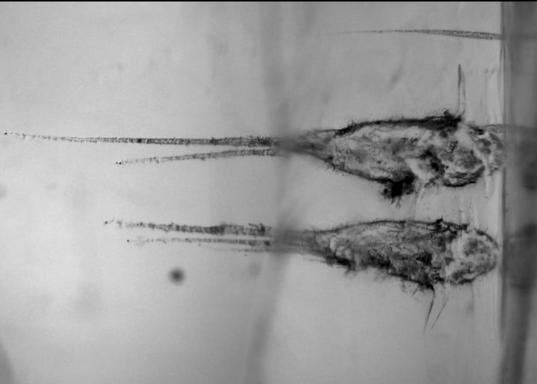 These tracks were made by two particles from comet Wild 2 after they crashed into an aerogel sample cell on the Stardust spacecraft. The largest comet particles fragmented into multiple pieces on impact; you can see several particles at the ends (on the left) of these tracks.

How else to use the catalog? I imagined myself a researcher reading a paper on a Stardust sample analysis and wanting to see all the data related to that sample. I checked out the most recent Lunar and Planetary Science Conference abstracts on Stardust sample analysis (that link takes you to a multi-MB PDF document) and selected the first abstract, by Brownlee et al., which discussed "Track 25," also known as "Inti." Could I find this one in the database? It's a cometary sample, so I clicked the "Cometary Samples" menu and selected the "Cometary Tracks" option. A menu opened up with tracks numbered sequentially; I selected "C25" and was rewarded with the information that C25 is a "Turnip track grading into carrot track." Clicking on the "Track subsamples" tab got me to a long list of subsamples, some of which were named "Inti-G," "Inti-H," etc. -- so it seems that I managed to find what I was looking for in just a few seconds without knowing very much at all about Stardust sample analysis. Well done on the database design, JSC! I think this will be a very useful tool for anybody who wants to work on the Stardust samples -- or for anyone who wants to browse the photos of those funky turnip- and carrot-shaped tracks!