I've spent a pleasurable hour or so browsing over the latest release of images from Cassini to the Planetary Data System. These releases happen four times a year, as the imaging team archives a quarter's worth of data and makes it available to other scientists (as well as to members of the public, like me). Of course, all the other Cassini instruments are archiving their data as well, but I'm afraid I've mostly never tried to access any of the data from any of the other instruments. I'm a sucker for images! 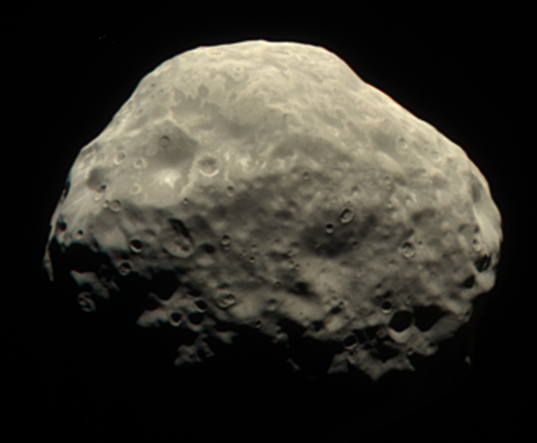 Cassini took the images for this unusually close view of Janus on 26 July 2009. The image is composed of four pictures taken through red, green, blue, and clear filters and is enlarged by a factor of two.

And here's a view of Iapetus, one of many taken by Cassini in September of last year. 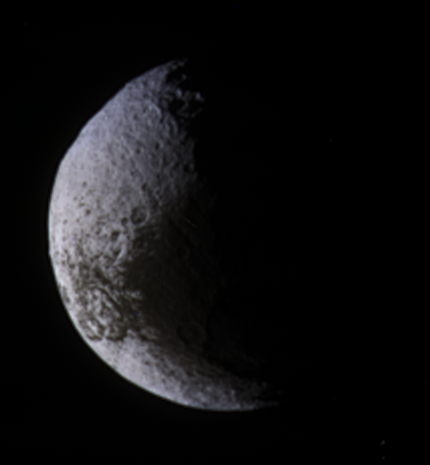 Cassini took several series of photos of Iapetus from a distance in September, 2009. This one is composed of four pictures taken through infrared, green, ultraviolet, and clear filters and is enlarged by a factor of two.

There aren't too many high-resolution images of moons in this particular data release because it is the one that covers Saturn's equinox, which happened in August of last year (the release covers the period from July 1 to September 30). So it is really worth browsing the archive to see all the amazing photos of dark rings, shadows of moons on rings, and pictures of Saturn with only the skinniest ring shadow crossing its belly.

It's much easier to browse the archived data than it used to be, thanks to the marvelous Outer Planets Unified Search (OPUS) tool at the Rings Node of the Planetary Data System. It takes OPUS a couple of weeks after the release of the data to ingest it into their database, but after waiting nine to 12 months for the data I don't have a problem waiting an additional two weeks to be able to browse it in such comfort! Here are direct links to index pages for the two most recent volumes in the Cassini imaging data set, 2056 and 2057.

And, as usual, Björn Jónsson has provided me with an update to his database of Cassini images, which you can download here!