A spectacular new global map of Mars, which YOU can make even better

I am such a nerd. This new map of Mars just brought tears to my eyes. Honestly. Mars Odyssey has been in orbit since October 2001 -- nearly nine years -- circling Mars about twelve times a day. That's more than 40,000 orbits it's racked up. The THEMIS camera has been working pretty much continuously since mapping started in January 2002, stopping only when the orbiter went into safe mode. It's taken all those years, and a total of 21,000 images, plus an incredible amount of work assembling the images, tying them together, matching their levels of brightness and darkness, but it's finally here: an unbelievably detailed, nearly seamless, map of all of Mars, at 100 meters per pixel. That's a land area comparable to Earth's!

The map is better than previous ones not only because of its resolution and its seamlessness but also because its images were taken with an instrument that sees at much longer wavelengths than human eyes do. Just because our eyes happen to detect electromagnetic radiation with wavelengths ranging from 400 to 700 nanometers, doesn't mean that's the best wavelength to use to see details on the surface of another planet. THEMIS' map is taken in thermal infrared wavelengths, where rocks and soil are radiating heat. During the day, sun-warmed slopes radiate more heat than shadowed ones, so daytime infrared images have topographic shading that is similar to visible images. But there's a key difference: dust heats up much faster under sunlight than rock. So exposed bedrock, in these images, looks much darker than dusty areas, and the full map gives you much more information about the geology of the landscape than you'd get with just visible-wavelength photos.

How can you access the map? The easiest way is through a Google map interface. Once you've located a view you like, you can export it directly from the map interface. Selecting "512 ppd" (that's "pixels per degree") will get you the maximum resolution you can achieve through this map interface, which is a little bit shy of 100 meters per pixel -- but close enough. The views are exported in PNG format, which is terrific, because it is lossless -- no JPEGgy artifacts. Here's just one sample view near the center of the map. And you can quickly select other data sets to get them in the very same field of view, things like MOLA topography and TES mineral maps. It's a marvelous interface, though a bit slow today; I assume a lot of people are hitting it and expect that'll improve as the novelty wears off. 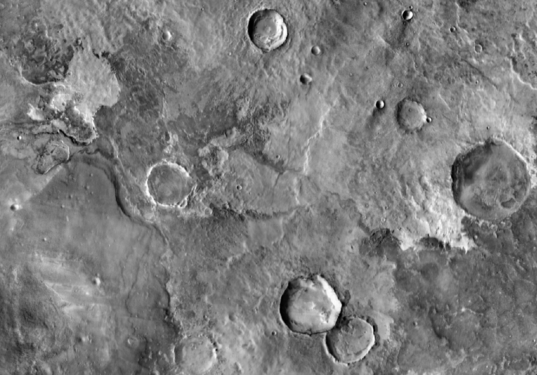 This announcement was cool enough, but wait, it gets better. By which I mean, the map will get better -- with YOUR help. Check this out, from the press release:

Every map, however good, can still be improved and this is no exception. "Computer-made maps have gone about as far as they can," says [THEMIS Principal Investigator Phil] Christensen. "Now it's the turn for citizen scientists."

He adds, "With the help of people from around the world, we can increase the accuracy of the global Mars map for Red Planet explorers everywhere."

NASA's "Be A Martian" website, developed in cooperation with Microsoft, offers an easy and engaging way for would-be Mars mappers to do exactly this. ASU is regularly contributing newly taken THEMIS images to the Be A Martian "Map Room," where the public can help by hand-aligning new images, placing them within a pixel's accuracy. I just checked out the "Be A Martian" website and while I find it quite a bit overdesigned -- I guess that's to draw in the kiddoes -- it didn't take me long to get into the "Map Room" and start helping align images, with an interface that was very easy to use (if you can tune out all the visual clutter around the edges).