Volcanism across the solar system: Io

Three months ago, grandiosely, I announced that I was going to survey volcanism across the solar system, and I began the journey on Earth. Then I failed to follow up. For once, my procrastination has worked to my benefit, because Ashley Davies, Laszlo Kesthelyi, and Andrew Harris have just published a paper titled "The thermal signature of volcanic eruptions on Io and Earth" that, apart from being about a really useful new way to look at Io volcanism, also provides the background material that I was going to have to research and write myself. I always enjoy talks at conferences given by Ashley or Laszlo, because they're unusually good at achieving clarity in their presentations, and the same is true of their writing.

Before I get ahead of myself, though, a little reminder of what I'm talking about. Io is the innermost of Jupiter's four large moons, really an odd duck among the moons of the outer solar system because it totally lacks surface ice. Oh, and because, as far as anyone knows, its volcanoes are in a constant state of eruption. Here's a view from Galileo, just one of a bazillion nice color composites available from Jason Perry's website. 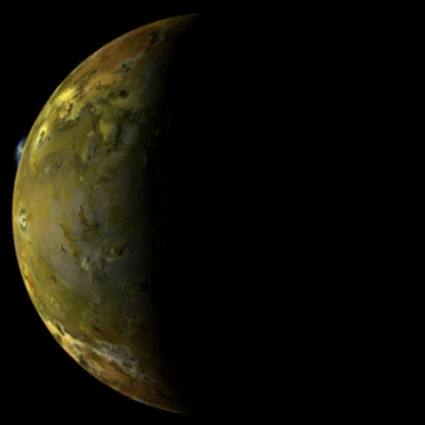 Galileo took the images for this color composite of Io on November 7, 1997.

Io is a small body to be so volcanically active. The energy for all that volcanism doesn't originate within Io. It arises from Io's orbit of the giant planet Jupiter. The orbit is elliptical, made so because of a resonance with the orbits of Europa and Ganymede; Io orbits Jupiter four times for every two times Europa does, and every one time Ganymede does. A body in an elliptical orbit moves faster in some parts of its orbit than in other parts.

But Io also rotates, exactly once for each orbit, a state known as synchronous rotation. People usually equate this with "keeping the same face turned toward its planet all the time," but when the body is in an elliptical orbit it's not quite so simple. The rotation rate is constant but the orbital speed is not, so Io nods back and forth as it orbits Jupiter, much like our own Moon does as it orbits Earth, an effect you can see in this cool animation:

Visit Laurent Laveder's website for the full-resolution version. This animation is composed of 20 photographs of all of the full Moons from May 2005 to December 2006. The Moon appears to shrink and enlarge and wobble back and forth because its orbit around Earth is inclined and elliptical. The Moon appears smaller when it is farther from the Earth (at apoapsis) and larger when it is closer (at periapsis). The wobbling -- known as libration -- results from the fact that the Moon travels slower near apoapsis than periapsis, while its rotation rate is constant. The wobbling permits Earthly viewers to peek over the eastern and western limbs over the course of a month. The orbit's inclination gives us views over the north and south poles, depending on how high the Moon rises in the sky. The Moon's libration means that a total of 59 percent of the lunar surface is visible from Earth over the course of each month.

The back-and-forth nodding of Io in its orbit means that the tidal bulge moves back and forth, too; and as its insides deform to accommodate the bulge's motion, energy is dissipated as heat. Being so close to such an enormous planet with such a fast and so elliptical orbit (Io orbits Jupiter once every 42.5 hours), the amount of energy sunk into the little world by this back-and-forth motion of the tidal bulge produces a LOT of heat. Enough to drive continuous volcanism from dozens of volcanoes, making the most geologically active world in the solar system.

The active volcanoes were first discovered in Voyager images, of course. The lavas that came out of those volcanoes were initially thought to be composed of sulfur (in part because of the bright colors on Io's surface, a result of sulfur compounds). Now, though, we know that Io's volcanoes spew molten rock, just like Earth's. Diana Blaney and her coauthors have estimated that 500 cubic kilometers of liquid hot magma erupt onto Io's surface every year; this is more than a hundred times what comes out of all of Earth's volcanoes, even when you include the mid-ocean ridges that nobody sees.

Orbiting and flyby spacecraft, namely the Voyagers, Galileo, Cassini, and New Horizons, have provided our most dramatic views of Io's erupting volcanoes. Just as on Earth, there are lots of different kinds of volcanoes on Io, everything from fire fountains to lava lakes. 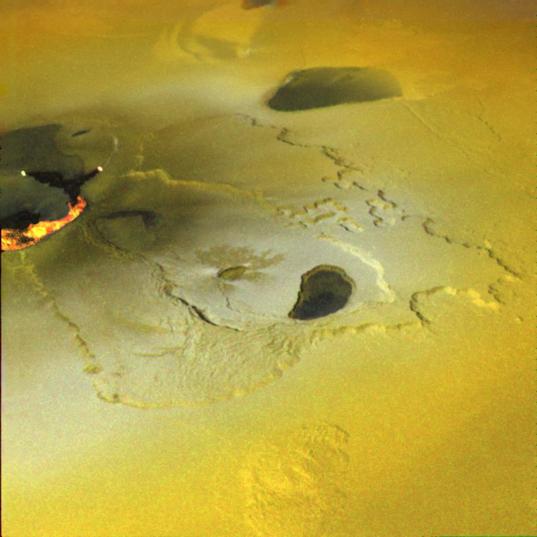 The Galileo spacecraft caught Io in the act of an active volcanic eruption on Februrary 22, 2000. Tvashtar Catena is a chain of calderas, collapse pits formed by volcanic eruptions. The active site of the eruption is visible on the left edge of the image, where infrared imaging sees the glow of a hot lava flow more than 60 kilometers long.

Two low-sun images of Zamama from Galileo's I32 orbit (October 2001, left) and I24 (October 1999, right). Zamama consists of a 140-kilometer-long lava flow field that formed between 1979 and 1996 and was still active as of 2007. The scrambled raw data for the I24 image was unscrambled by a program developed at JPL using the LabVIEW software from National Instruments of Austin, TX.

The Davies et al paper explains that with a relatively simple measurement -- a ratio of how bright an erupting volcano appears to be at two different near-infrared wavelengths, around 2 and around 5 microns -- astronomers can determine not only the fact that a volcano is erupting, but also what kind of eruption it is. Some kinds of eruptions include: lava fountains; lava flows; lava lakes; lava domes; insulated flows; and tube-fed flows.

This is clearly useful for the future Jupiter mission, which may have a few flybys of Io but will mostly orbit Europa and thus only be able to observe Io from a distance: "The ability to identify and track individual volcanic eruptions from a distance based on a few wavelengths of data will greatly increase the return of Io science per returned byte of data," Ashley and his coauthors remark. Although beneficial, an orbiter is no longer required to determine the eruption style of Io's volcanoes: "We now have sufficient data to constrain eruption style using the new Adaptive Optics-enabled multi-wavelength data for Io's volcanism."

Speaking of which, Franck Marchis is one of the astronomers doing just that kind of work, and he recently posted to his blog some images of Io, erupting, taken with the Adaptive Optics-equipped Keck II telescope. 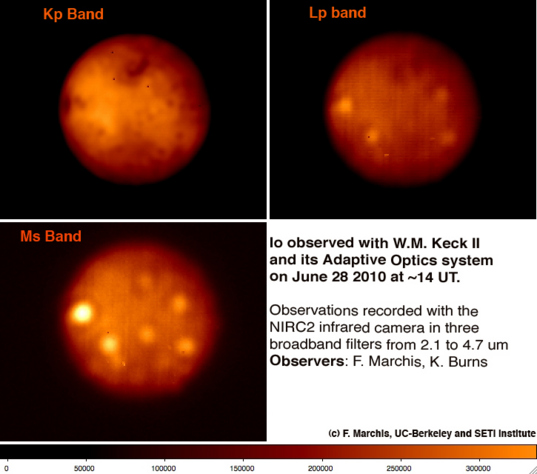 Io as seen with from Keck II Adaptive Optics

Three observations of Io recorded on June 28, 2010 at about 14:00 UT with the NIRC2 infrared camera in three broadband filters from 2.1 to 4.7 microns by observers F. Marchis and K. Burns.

But wait, there's more. The ratio method that Davies et al. describe can also be used on Earth. It was derived to deal with the low resolution of data available for Io, but can be turned around to be applied for Earth volcano monitoring, one of many important inputs into climate studies (not to mention the importance for local populations of monitoring natural hazards).

The paper was published in a fairly obscure journal (obscure, that is, to me): the Journal of Volcanology and Geothermal Research. And it wasn't press released, either. So how did I find out about the study? Because Ashley proactively emailed me (and lots of other people) a copy of the paper. Good on you, Ashley! Other scientists take note! I won't promise to write about every paper I receive. But I do promise at least to read the abstract and conclusions and look at the pretty pictures, so I'll be familiar with your work when I write about the fields you work in.