All appears to be going very smoothly on Rosetta through, and after, its flyby today of asteroid (21) Lutetia. Via ESA's live webcast I saw them lose the signal from the spacecraft as expected, and reacquire it at the expected time 35 minutes later, as Rosetta passed through its closest approach to the largest asteroid yet visited by a spacecraft.

During the webcast, they posted several images of the asteroid taken by Rosetta as it approached; the highest-resolution one was taken from a distance of about 80,000 kilometers. The closest-approach images will be taken at a distance of 3162 kilometers, or roughly 25 times closer, so the best pics will show roughly 25 times as much detail! I can't wait to see those. I, personally, will not see them until very late in my evening after I finally return home from a 3-week trip, but you will be able to see them when they are released some time after 21:00 UTC on the Rosetta Blog. And -- for those of you who have been asking -- I will definitely be updating my "asteroids and comets to scale" poster with one of those high res images, once they are released and I have a little time in front of my computer!

In the meantime, what I can say about the approach images is: wow, it's pretty lumpy!

On July 10, 2010, ESA's Rosetta spacecraft flew within 3,200 kilometers of (21) Lutetia, the largest asteroid yet visited by a spacecraft. The 46 images in this animation were taken as the spacecraft approached the rotating asteroid, up to a distance of about 80,000 kilometers.

Here's a montage of some of those pics, processed to try to bring out a bit more detail in the brightly sunlit areas. It looks both faceted and cratered, with noticeably raised, almost pointy-peaked crater rims. I don't see obvious albedo markings.

Fifteen of the photos taken by Rosetta as it approached Lutetia. This montage was composed by Phil Stooke after a version released by the OSIRIS team; Stooke adjusted the contrast to bring out more detail in the brightly sunlit areas, and oriented the images so that north is approximately up. The second image in the sequence (one up from lower left corner) is approximately the same view as the final image, so the frames shown cover a full rotation of Lutetia.

Finally, here's the highest resolution view shown in color. While I'm sure there is yet more careful calibration work to be done to make sure this is the "right" color, it appears red, as it should; objects with ancient surfaces that have been exposed to solar radiation and micrometeoroid damage for a long time tend to be more reflective at longer wavelengths than shorter wavelengths, making them appear red to our eyes. 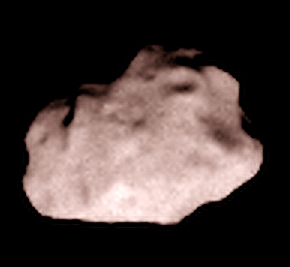 This is the best view of Lutetia transmitted back to Earth by Rosetta before it entered the close-approach phase of its encounter.

More images will be released after 21:00 UTC. Via Twitter ESA has already confirmed that OSIRIS has returned some spectacular images; the camera team is now working on processing and readying them for release. They won't be released, though, until after the media distraction of the Uruguay-Germany World Cup match is over. The ESA Webcast will resume at 21:00 UTC, or you can watch the Rosetta Blog for the images.