As promised last week, Cassini has delivered its best photos yet of the tiny moon Daphnis, the ringmoon that is responsible for carving out the skinny Keeler gap at the outer edge of Saturn's A ring. In addition to carving out the gap, its slight up-and-down motions, coupled with the fact that the particles in the ring that are closer to Saturn move faster in their orbits than Daphnis does, Daphnis excites vertical wave structuresin the edge of the gap that make the sawtooth patterns visible in this image. 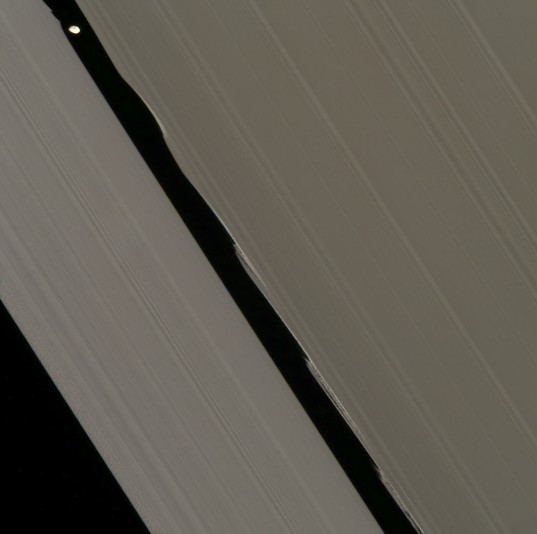 Daphnis and its wakes

Cassini captured the frames for this approximately true color view of the moon Daphnis on 5 July 2010. The image of the moon and the wakes it excites at the edge of the Keeler gap in Saturn's A ring were captured from a distance of about 73,000 kilometers.

The moon itself is about 9 kilometers across, the Keeler gap roughly 42 kilometers wide. In the photo above, Daphnis appears to be something more than a quarter the width of the whole gap. Remember, though that Cassini is not looking straight down on the rings; it's looking at an oblique angle. So the gap within the planar rings is foreshortened, but the quasi-spherical moon is not, making it appear larger with respect to the gap width than is actually true.

The image was composed of three Cassini frames shot through red, green, and blue filters, and posted to the Cassini raw images website this morning. There are six more frames on Daphnis, all shot through a clear filter (1, 2, 3, 4, 5, 6). In the versions on the raw images website, which have been automatically contrast-enhanced before posting, Daphnis appears overexposed, which washes out detail on the moon. But that may not be true of the actual data -- we'll have to wait and see!

Apart from being cool, what are these images good for? For one thing, there'll no doubt be a publication in which the imaging team will use this set of images to produce more precise numbers than we've had before on the dimensions of Daphnis. For another, I am quite sure that the rings people are eagerly examining the unprecedentedly close view of those peculiar wake structures preceding Daphnis in its orbit. If the actual images are not overexposed on Daphnis, the imaging team should also be able to say something about whether the surface of the moon appears similar to or different from the other ringmoons that have been photographed close up before, like Atlas.