The solar system, in jewelry form

A couple of months ago, someone on Twitter sent me a link to an article about Laura Cesari's bead jewelry inspired by the solar system. I thought it was awfully cool (translate: I wished I had thought of the idea), and sent Cesari a few questions about her work.

ESL: What gave you the idea to create this planet-themed jewelry?

C: The Universe deserves to be represented in a beautiful and elegant way! Years ago, I discovered a particularly nice piece of agate in a friend's bead shop that reminded me of Jupiter, and created a "Jupiter necklace" with other beads orbiting around it like moons. It has an alluring other-worldly quality, and it has been one of my favorite necklaces for quite some time. This prompted me to create a necklace representing the Solar System. In the Solar System design, I decided to "zoom out" and focus on using small beads to measure the proportional distances between the planets. 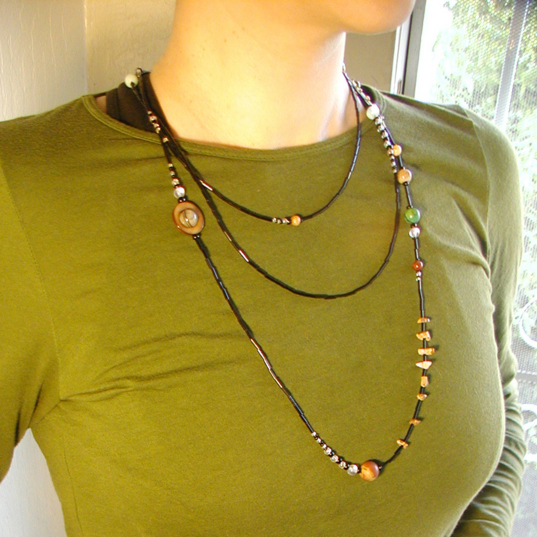 Artist Laura Cesari plays with the scales and distances in the solar system through jewelry. This necklace is a single strand, 75 inches long, that demonstrates the distances between the major bodies in the solar system. Cesari describes it: "A wearable version of an astrometric chart, with gemstone, ceramic, shell, and glass beads representing the sun, planets, moons, and asteroids, this solar system necklace serves as a decorative cosmogram, inspiring thoughts of the vastness of space. Distances between planets are proportionally accurate, with each bead representing approximately 20 million miles of Space. Planets, moons, and asteroids are enlarged for dramatic emphasis. Not for use in actual space navigation." Cesari offers the necklace for sale here; a shorter version of the necklace is also available as a pattern and kit.

It took some calculations, a few abstractions, and a couple of prototypes: the first version was 75 inches long, made with 7-millimeter tubular glass bugle beads, each bead representing about 20 million miles. This Solar System Necklace design seemed like a good way to translate the mind-boggling distances of space into something tangible, something that people can measure physically with familiar objects.

Since almost everyone has seen a map of the Solar System at some point, the necklace intrigues people with a "déjà-vu"-like familiarity: without prompting, everyone has a childlike epiphany, usually with a fantastic "aha" moment at recognizing where they are in the universe. Many people recognize Saturn first -- hearkening to a classic episode of Cosmos I re-watched recently, wherein Saturn was described as the "crown jewel of the solar system," and touted as the landmark of how we recognize our home in the universe.

ESL: A great challenge with creating artwork that attempts to convey the scales of things and distances in the solar system is the logarithmic nature of the distances -- they cover many orders of magnitude. Did you have any false starts that just didn't work as jewelry? Which of your pieces do you think succeeds the best at giving a feel for solar system scales?

C: The Miniverse 19-inch necklace is the most photogenic -- you can actually see all the planets in one picture (cautionary note: trying to take detailed photos of a 75-inch necklace is something of a cruel cosmic joke, with a touch of Cubist torment).

In my multi-strand Orbital Necklaces, the vast differences in the lengths of planetary orbits are pretty impressive translated into beads: you get to imagine your head as the Sun, with planets orbiting around your neck. Each strand of beads measures the distance of a planet's orbit, with each bead representing 1 million miles. In my first thoughts, I had hoped to represent a larger series of neighboring planet orbits in one necklace. However, because the successive orbital path distances increase so dramatically, the necklaces have worked best with 3 strands, representing Mercury-Venus-Earth or Venus-Earth-Mars, depending on the size of the beads.

ESL: When I try to incorporate solar system data into artwork, I always feel as though I'm in a battle between right and left brains, between wanting things to be accurate and wanting them to be aesthetically pleasing. How do you deal with that conflict?

C: Welcome to my world! The answer seems to be always somewhere in the Corpus Callosum. When my right and left brain argue, in a best case scenario they end up tango dancing in intricate mathematical patterns until they establish a "no-man's-land" of artistic-intellectual compromise: eventually they agree that YES, it's gotta be pretty, AND smart.

Translating three-dimensional space into a wearable linear string requires several degrees of artistic abstraction. It's a delightful adventure in one of my favorite visual art practices: information design -- the art of displaying data. One of the most interesting challenges in information design is starting with a complex idea and representing it as simply and accessibly as possible, and this often relies on the right and left brain working together.

Firstly, the planets needed to be enlarged dramatically in order to be visible. I had to think of the planet beads as markers representing the locations of the planets, like enlarged downtown areas in maps, or the "enlarged to show texture" graphics seen on product labels. I also rounded the numbers to a common segment of distance that could be represented by one bead. Various lengths of necklaces can be created by using different sizes of beads as the unit of measure.

I make an effort to represent Earth's Moon somewhat to scale, since it's a landmark that earthlings recognize, but with the other planets, moons were a tricky challenge in the linear arrangement. I had to use some artistic license with the quantity and mass represented in order for the necklace proportions to work: there are 169 discovered moons, and each planet has a different number of moons, thus stretching out the distances in disproportionate ways. (In response to this challenge, a new necklace featuring the Moons of Neptune is in progress... stay tuned.)

Laura Cesari teaches courses on Interactive Design and Animation at Expression College for Digital Arts, and has a baccalaureate in Interdisciplinary Computing in Art and Music from University of California, San Diego.