It's unimpressive now, but in a few weeks the pinpoint of light at the center of this photo of a starry sky will loom very large to Rosetta's cameras. The image below is Rosetta's first view of its next target, asteroid 21 Lutetia. 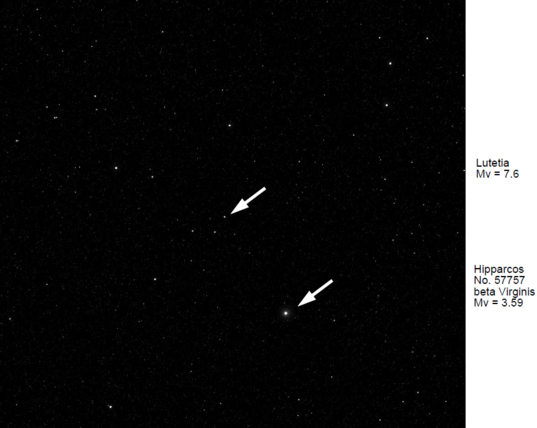 I can't wait to see Lutetia. I've been thinking a lot about Itokawa lately, which was the smallest asteroid yet visited by a spacecraft. Lutetia will be the largest by far, double the size of the largest previously visited one, Mathilde.

Optical navigation images like the one above are used by the mission to fine-tune their understanding of the position of Lutetia in the sky. Analysis of the latest images has shown that, without a rocket burn, Rosetta would pass within 2639 kilometers of Lutetia, more than 500 kilometers closer than desired. So they plan to do a trajectory correction maneuver tomorrow to position Rosetta farther from the asteroid at closest approach. Why would you want to go farther? Via the Rosetta blog, Rosetta spacecraft operations manager Andrea Accomazzo explains:

If we fly closer than 3160 km, then the asteroid image will 'fill up' the cameras' field of view at closest approach. And then not only will we not see the full asteroid but, since the camera image guides the spacecraft attitude, we also would not know at what spot on the asteroid surface we are pointing. Moreover, the science teams have prepared commands for the spacecraft's instruments assuming a certain pre-set distance range from the asteroid.

If we do not pass by within this planned range, we might hamper their observations. It is true that we will use fuel for this correction, but it is very little compared to entire mission and it is far below the amount allocated for this flyby. To be precise, we will only use something in the order of 300 g of fuel.The blog also quotes Rosetta flight dynamics head Trevor Morley as saying that

Although the main reason for tweaking the Rosetta trajectory is to increase the fly-by distance, a secondary reason is to ensure that the solar phase angle passes through zero so that at about 18 minutes before closest approach (at a separation distance of 16 400 km) the asteroid, as viewed from the spacececraft, will be seen fully illuminated.

Over the next weeks, Rosetta will approach slowly and that pinpoint of light will get larger and larger. I won't be posting much about the approach though, as I am going to be on vacation for the two weeks from June 20 through July 4. I'll pick things up again in those final days of the approach, and I'm sure Rosetta and Lutetia will be the main things I'll post about when I get back! In the meantime, to get your Rosetta fix, read the wonderful Rosetta blog on the ESA website (which is where I will be getting most of my news anyway). 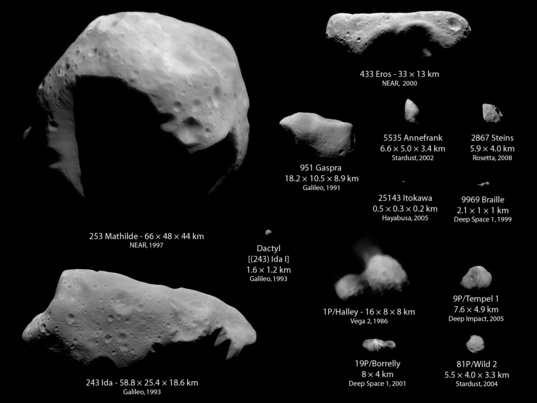 All asteroids and comets visited by spacecraft as of September 2008

The total of four comets and eight asteroid systems (including nine separate bodies) that have been examined up close by spacecraft are shown here to scale with each other (75 meters per pixel, in the fully enlarged version). Most of these were visited only briefly, in flyby missions, so we have only one point of view on each; only Eros and Itokawa were orbited and mapped completely.